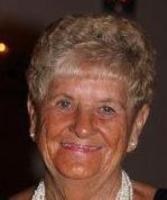 BORN
1934
DIED
2021
FUNERAL HOME
Sisk Brothers Funeral Home - Hamden
3105 Whitney Ave.
Hamden, CT
Ann "Fay" Kennedy
Ann "Fay" Kennedy, 87, of North Haven passed away on July 10, 2021 after a brief illness. Beloved wife of the late Thomas E. Kennedy, Jr. Loving mother of Marybeth Williams (James) of Guilford, Thomas Kennedy III of North Haven, Kevin Kennedy (Jamuna) of Michigan, Karan Mordecai (Mark) of Wallingford, and Megan Turski (Justin) of Cheshire, sister of Rev. Paul McLaughlin of St. Petersburg, Florida and Virginia Ryan of Hamden. Also survived by her ten cherished grandchildren who were her pride and joy, Kirsten, Jamie, Allison Williams, Kelly and Kimberly Kennedy, Connor and Casey Mordecai, Braeden, Paige and Nolan Turski. She was predeceased by her brother, William McLaughlin and her sister, Frances Mason. Fay was born in Cambridge, MA on March 31, 1934, daughter of the late William F. and Marion Judd McLaughlin. She later moved to Hamden where she graduated from Hamden High School in 1952 and then the Hospital of St. Raphael School of Radiologic Technology. Prior to raising her family, she worked as an X-ray technician at the Hospital of St. Raphael and also other doctors' offices in the New Haven area. Fay married her husband, Tom on June 7, 1958 and shared 52 years of marriage with him. She had a deep commitment to her faith. Fay was a longtime parishioner of St. Barnabas Church, where she was still a part of the Mother's Circle group. She enjoyed her summers at the beach on Cape Cod and at Owenego Beach Club where she was a longtime member and made many wonderful memories with her family and friends. Fay will be remembered as a kind, loving and devoted wife, mother and grandmother. She will rejoin her loving husband in heaven on his "heavenly" 90th birthday. Mrs. Kennedy's family would like to thank the staff at the Regency House Nursing and Rehabilitation Center in Wallingford where she was cared for shortly prior to her passing. Fay was very appreciative of the hard work and dedication of the healthcare workers. A Mass of Christian Burial will be Celebrated Thursday at 10 a.m. in Our Lady of Mt. Carmel Church. Burial in St. Mary's Cemetery. Calling hours are Wednesday from 4 - 7 p.m. in Sisk Brothers Funeral Home, 3105 Whitney Ave., Hamden. In lieu of flowers, contributions to the Sisters Project, P.O. Box 1643, Wallingford, CT 06492 www.sistersproject.org or to a charity of one's choice. To leave an online condolence, please visit www.siskbrothers.com

Published by The New Haven Register on Jul. 12, 2021.
To plant trees in memory, please visit the Sympathy Store.
MEMORIAL EVENTS
Jul
14
Calling hours
4:00p.m. - 7:00p.m.
Sisk Brothers Funeral Home - Hamden
3105 Whitney Ave., Hamden, CT
Jul
15
Mass of Christian Burial
10:00a.m.
Our Lady of Mt. Carmel Church
CT
Funeral services provided by:
Sisk Brothers Funeral Home - Hamden
MAKE A DONATION
Please consider a donation as requested by the family.
MEMORIES & CONDOLENCES
Sponsored by NHRegister.com.
2 Entries
I was very sad to hear the news about Fay So many memories of Fay an Tom at the O every summer. My love prayers an sympathy go out to all of you She was a wonders lady I always loved seeing her walking down the hill . She will truly be missed I´m sorry I could not attend the wake or Mass. Love Jane
Jane Bloomquist Peck
Friend
July 15, 2021
My condolences to the entire Kennedy family. I remember her and your dad at many gatherings with the Murrays,Delaneys and my parents. May she rest in peace with your dad.
Richard Carroll
Other
July 13, 2021
Showing 1 - 2 of 2 results