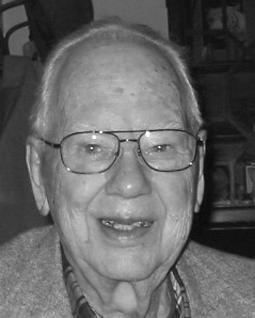 FUNERAL HOME
Alderson-Ford Funeral Homes Inc
615 South Main Street
Cheshire, CT
OBERST, E. ERNEST E. Ernest Oberst, 96, of Cheshire, retired Judge of Probate, died on May 29, 2014. He was the husband of Jean (Schorer) Oberst, and son of George and Frieda (Radon) Oberst. Surviving are his son, Dr. William E. Oberst and wife Gail of North Adams, MA, and daughter Nancy O. Clark of Cheshire; five grandchildren, and three great-grandchildren. He was predeceased by a daughter, Carolyn O. Belue. He is the brother of the late Darien Probate Judge George W. Oberst. Born in New Haven on January 9, 1918, and educated in New Haven schools, Mr. Oberst received his AB degree from Bates College and his law degree from the Yale Law School. He was a Naval officer in World War II; in the first part of the war he served as skipper on a sub chaser in the South Atlantic and eventually served in the Pacific Islands. He continued his Naval career in the Naval Reserve until his retirement as a Lieutenant Commander in 1978. Mr. Oberst practiced law in the New Haven area beginning in 1948, and was secretary and general counsel to the Marlin Firearms Company for several years and continued to serve as a member of the boards of directors of the Marlin Corporations until 1998. Mr. Oberst had lived in Cheshire since 1950, during which time he served on various civic committees and organizations including USO-United Fund, Library Board, Rotary Club, Young Republican Club, and the Republican Town Committee. Mr. Oberst was the Prosecuting Grand Juror for the Town until he became its Trial Justice in 1954, a position he held until he was elected as Judge for the Probate District of Cheshire-Prospect. He retired from this judgeship after serving twenty-two years and became associated with the law firm of Fazzone & Baillie in Cheshire. Mr. Oberst was a member of the Masonic Order, the American Legion, and the First Congregational Church of Cheshire. He was instrumental in setting up the Harmon Leonard Youth Center and initiated, and saw to its fruition, the Town’s purchase of Mixville Pond for a town park. An avid inventor, Mr. Oberst has been issued ten patents for a variety of devices, including an adjustable celestial globe (1944), a tide clock (1986), a grip insert for workshop vises (1993), and several rifle safety enhancements (1997–2003). Many family and friends enjoy the results of his hobby of wood carving, especially wild game bird pins. Arrangements—Funeral services will be held for Mr. Oberst on Friday, June 6, from 5P.M until the time of service at 7P.M at the Alderson Ford Funeral Home, 615 S. Main St., Cheshire. Burial will be private. In lieu of flowers, donations may be sent to The Connecticut Hospice, 100 Double Beach Road, Branford, CT 06405 (online at www.hospice.com). To view this story online, send a condolence, or light a virtual memorial candle, please visit: www.aldersonfuneralhomes.com
Published by The New Haven Register from Jun. 2 to Jun. 3, 2014.
To plant trees in memory, please visit the Sympathy Store.
MEMORIAL EVENTS
To offer your sympathy during this difficult time, you can now have memorial trees planted in a National Forest in memory of your loved one.
Funeral services provided by:
Alderson-Ford Funeral Homes Inc
MAKE A DONATION
MEMORIES & CONDOLENCES
2 Entries
Dear Nancy and family,
I was very sorry to learn of the passing of your father.My thoughts and prayers are with you all.Your father was a remarkable man and I know he greatly influenced you in so many areas of your own life. May you find comfort and peace in the memories and legacy he leaves.
Lori Little
June 5, 2014
Nancy, I was so sorry to hear about your father passing. No one is ever ready for the death of a loved one. I remember when my mother died, I felt such a heavy heart for a long time. Hopefully the fond memories that you shared will be a source of comfort. Please know that you are in my thoughs and prayers at this difficult time.
Susan Tosatti
June 3, 2014
Showing 1 - 2 of 2 results