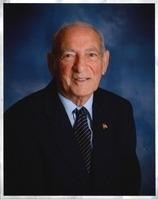 BORN
1931
DIED
2021
FUNERAL HOME
Macken Funeral Home & Cremation Services
1105 12th Street SouthEast
Rochester, MN
Gerald (Jerry) Raymond
August 8, 2021
On Sunday, August 8, Gerald (Jerry) Raymond, loving husband and father, passed away at the age of 89 at home in Rochester, MN.
To know Jerry was to know a kind person who took pride in his children, grandchildren, and military service. It was in his nature to help someone or to offer a chuckle to brighten a day. He always took to doing the right thing as a matter of principle. He lived in many places throughout his life – New Haven, CT; Bethany, CT; West Haven, CT; Chapel Hill, NC; Huddleston, VA and Rochester, MN.
Born October 1, 1931 to Victor G. and Edna B. Raymond, Jerry was the second of their four sons. Right after graduating from Hillhouse High School in New Haven, CT he enlisted in the army. He served three years – one of which was in combat in Korea. He was honorably discharged with the rank of Sergeant. He then worked at the United Illuminating (UI) in New Haven for 39 years in various roles. He was a lifelong member of the Veterans of Foreign Wars (VFW) and belonged to the American Legion.
Jerry and his wife Ruth recently celebrated 64 years of marriage. He will deeply be missed by his children – Gerald, Jr (wife Kerry); Susan (husband Alan Whitebook); Kenneth (wife Kimiyo) and Kathleen (partner Christopher O'Neill) and grandchildren Michael and Julia Raymond and Sam and Aidan Whitebook. He is also survived by his sister-in-law Dawn Raymond, nieces, nephews and many other family members and friends who loved him.
He was preceded in death by his parents, brothers Victor, Robert and in childhood John, as well as his grandson Christopher Raymond.
A private service will be held in Rochester, Minnesota, while a memorial event will be held at a later date in New Haven, CT.
In lieu of flowers, please give to a charity of your choice and offer a smile to a stranger today.
Published by The New Haven Register on Aug. 9, 2021.
To plant trees in memory, please visit the Sympathy Store.
MEMORIAL EVENTS
To offer your sympathy during this difficult time, you can now have memorial trees planted in a National Forest in memory of your loved one.
Funeral services provided by:
Macken Funeral Home & Cremation Services
MAKE A DONATION
Please consider a donation as requested by the family.
MEMORIES & CONDOLENCES
Sponsored by NHRegister.com.
2 Entries
I worked with Jerry at New Haven harbor station for many years. He was a gentleman and always did the right thing.
Robert Matusovich
Work
August 11, 2021
We are very sorry to see Jerry's passing. Jerry and Ruth were very good neighbors on Lucey av in West Haven Ct God Bless him
Kane Family
Friend
August 10, 2021
Showing 1 - 2 of 2 results