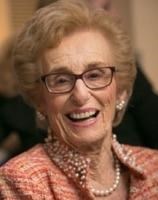 BORN
1930
DIED
2019
FUNERAL HOME
Robert E. Shure Funeral Home
543 George Street
New Haven, CT
Davis, Helen
When Helen Hyman Davis was born on October 6, 1930, her parents, Jack and Ida, couldn't have known the legacy of love their oldest daughter would leave behind. When Helen passed peacefully at home on December 22, 2019, her sons Stephen, Russ, and Jerry; her daughters-in law Clo, Debbi, and Katie; and the love of her life, Jack, were there at her bedside.
Helen along with her little sisters Carol and Lois grew up playing together at their home in Woodmere, Long Island. After Helen earned her bachelor's degree at Wilson College, friends introduced her to a dashing, dimpled man, Jack Davis. Jack's background was very different from Helen's, whose father co-founded Citizens Life insurance. Jack's immigrant parents barely spoke English, and his dad was a bricklayer and fruit and vegetable peddler. Jack and Helen fell madly in love, though it took until Helen and Carol were on a trip to Europe to realize she could no longer be apart from Jack. Helen famously ditched her sister and flew home and into Jack's arms. (Carol forgave her … eventually.) They were married in New York City in a wedding worthy of Helen's glamour and elegance, on January 24, 1954.
Jack and Helen moved to Madison in 1956 and together, transformed the Grove School, a residential high school for emotionally disturbed children. Armed with her Master's degree in Special Ed and under their direction, it went from a small summer facility to an innovative, world famous treatment center which helped thousands of children and their families.
When Grove was on break, Helen and Jack took their young sons on trips to far-flung destinations like Iran, Afghanistan, and the Amazon. Yes, that Amazon––with a four-, six-, and eight-year-old. Helen was a brave and intrepid woman who shared the world and its lessons with her children.
In May of this year, Jack and Helen were honored by the Madison Historical Society to celebrate the results of their love for Madison. They started Davis Realty, which benefitted the town of Madison through its development and upkeep of historical buildings. There were the annual events, hosted to help all kinds of local charities and organizations, like the Madison Fire Department, Hand High School, Rotary Club, the Madison Art Mile, and the annual Independence Day Concert on the Green. If you were lucky, you got to taste her signature recipes: chopped chicken liver and chocolate brownies baked with raisins (not served at the same time). Helen's superpower was her quiet strength, skill, and smarts. She quietly captained these efforts, just as she did their businesses. Her diplomacy and wisdom made a success of her chairmanship of the board of trustees of The Country School, and her presidency of Temple Beth Tikvah, which she and Jack pushed to found.
Helen lit up when her grandchildren were around. Benny and Ruby, Alyssa and Carly, James, Jacob, and Gabriel made her glow with pride. She was inspired by their energy and hopes, and each knew that Nana was on their side, no matter what. Two weeks before she died, Helen even got to hold her first great-grandchild, six-week-old baby Alice.
Helen's funeral will take place Thursday, December 26, 2019 at 1:30 p.m. at Temple Beth Tikvah, 196 Durham Road, Madison, Connecticut 06443. Interment will follow the service at the TBT section of Beaver Brook Cemetery, off Route 145, Clinton, CT. The Robert E. Shure & Son Funeral Home, New Haven is in care of Arrangements.
May her memory be for a blessing. Donations may be made in Helen's memory to the Temple Beth Tikvah Building Fund. To sign an online registry book or to leave a message of condolence, please visit;
www.shurefuneralhome.com.

Published by The New Haven Register on Dec. 24, 2019.
To plant trees in memory, please visit the Sympathy Store.
MEMORIAL EVENTS
Dec
26
Funeral
1:30p.m.
Temple Beth Tikvah
196 Durham Road, Madison, CT
Funeral services provided by:
Robert E. Shure Funeral Home
MAKE A DONATION
MEMORIES & CONDOLENCES
Sponsored by NHRegister.com.
5 Entries
Rest in Peace wonderful lady. My condolences and love to Jack and your family.
JEFF SIEGEL
January 6, 2020
To my friend, Jack.
From my family to yours, please accept our sincerest condolences on your loss of your dear wife, Helen. God Bless.
Captain Morgan
Captain Morgan
December 29, 2019
Jack, I am so very sorry for your loss - with all my sympathy, Pam Herman (John's daughter)
Pamela Herman
December 28, 2019
I knew Helen Davis to be a wonderful person. Helen and Jack, together, gave me the extraordinary opportunity to take over the Grove School and thereby to build on their efforts; continuing their legacy of good works, through treatment and education, with an emphasis on the Arts and creativity.
Helen was a strong, determined, and fair-minded person who was always a pleasure to be around. I truly enjoyed getting to know her, and Jack, and their family over the last 35 years. Helen will be missed by her family, and her many friends and acquaintances.
Richard Chorney
December 27, 2019
So sorry to hear of the loss of your mom. We know that you have many wonderful memories to share. Love to you and your family.
George, Diane, Zach, Jake and Leah
December 25, 2019
Showing 1 - 5 of 5 results