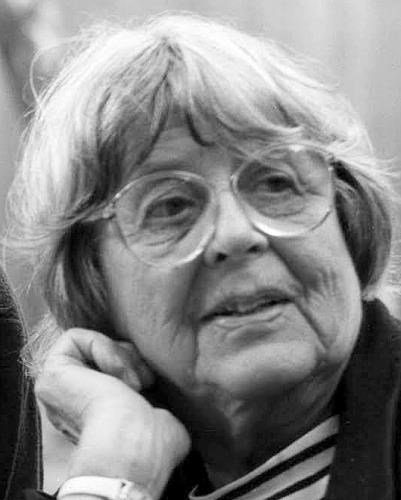 BORN
1919
DIED
2016
EISENMAN, HOPE GREER Hope Greer Eisenman died May 3, 2016 in her home in Bethany, Connecticut. Born in Haddonfield, New Jersey on December 30th 1919, she was the daughter of Simeon and Theodora Greer. Hope’s childhood was anything but ordinary. Her first memory was of living in Beverly Hills while her parents tried to make a career in Hollywood. There she remembered being an extra in The Little Rascals. “They threw candy off a truck to make us follow!” But midway through the 20’s, her parents parted ways and she moved to France and was schooled in Versailles while her mother pursued a career in painting in Paris. They eventually moved back to New York City and Hope attended Horace Mann School and later Horace Greeley School in Chappaqua where she met the love of her life, Alvin Eisenman, while editing the school newspaper. She headed off to Black Mountain College, which remained an enduring influence in her life. She would later support the Museum. They married when he finished college in 1942, and after WWII they moved to New York and started a family eventually moving to a 200 year old farm in Bethany, Connecticut when Alvin was hired by Yale University. Their eldest daughter Suzy wanted a horse which was difficult with the meager salary of a young college professor, so they boarded a horse for Tom Mendenhall, a Dean at Yale. Jake Eisenman, Hope’s second child, remembers being taken to nursery school on horseback by his mother and catching brookies in local streams with her. The horse, through a series of events, led them to Martha’s Vineyard where they spent many wonderful summers with family and friends and eventually built a home in Chilmark with the proceeds from Hope’s job teaching jewelry-making at the Foote School in New Haven. Hope and Alvin were a miraculous couple, madly in love, always opening their home to a wide group of family, friends, Yale faculty, alumnae and students. Their two halves made a whole, and she supported his work at Yale in many ways. Hope was an early organic gardener and member of the Brass Band of Bethany, a woman’s group that made brass jewelry. She was an enthusiastic presence at the Creative Arts Workshop; a prize-winning sculpture of hers in a “pizza, craft for the senses” competition emitted the intoxicating aroma of sauteed garlic. Most of all, she was a remarkable and stable matriarch to three children, seven grandchildren and five great-grandchildren; always remembering birthdays, Christmas packages, and homemade Valentines to mark the passage of the year. In later years, Hope and Alvin were cared for in their Bethany and Martha’s Vineyard homes by Mario Almeida of Hamden. He preserved and continued their tradition of candle-lit dinners and oysters by the truckload. Hope still had six chickens in Bethany, and was just sitting down to her usual breakfast of fresh eggs when she died. She is survived by her sister, Frances Scott Attaway, her children: Suzy Restino of Victoria, BC, Jake Eisenman of Yonkers, NY, and Sara Eisenman of Milton, MA; seven grandchildren: Samantha Cunningham, Carey James, Stephanie Pelosi, Gregory Eisenman, Lindsay Eisenman, Addison Godine , Madeline Godine; as well as five great-grandchildren, Thane and Rowyn Cunningham, Liam and Thea Hope James, and Leo Pelosi. There will be a service for Hope May 21 at 2pm at First Church of Christ Congregational, UCC, 511 Amity Road, Bethany, Connecticut.
To plant trees in memory, please visit our Sympathy Store.
Published by The New Haven Register from May 14 to May 15, 2016.
MEMORIAL EVENTS
May
21
Service
2:00p.m.
First Church of Christ Congregational, UCC
511 Amity Road, Bethany, CT
MAKE A DONATION
MEMORIES & CONDOLENCES
Sponsored by NHRegister.com.
1 Entry
I did not know Hope, but I wish I did. What a remarkable woman and life. May her memory be a blessing.
Marilynn Marks
May 21, 2016
Showing 1 - 1 of 1 results