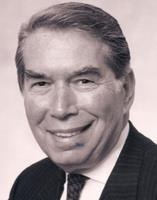 Greenfield, James
James R. Greenfield, Esq., of New Haven, CT, died peacefully September 5, 2019, at the age of 93 after a long life well-lived.
Jim was born March 31, 1926 in Philadelphia, PA to the late Katherine (nee Rosenberg) and Milton Greenfield. He was predeceased by his first wife, Phyllis Chaplowe, and his brother William. Jim grew up in Philadelphia and New York, attending Andrew Jackson High School in Queens, class of 1943. He had fond memories of riding the subway to work in New York City with his father, and summers in Atlantic City with his favorite cousins, Charlotte Baumgarten and Norman Berger. Later, he enjoyed summers in Maine with friends, and traveling, theater, and movies with his second wife, Joyce, whom he married in 1980.
Jim graduated from Bates College in 1947 and Yale Law School in 1950. During his undergraduate years, he served in the US Navy V12 program, ultimately stationed on Guam before returning to graduate from Bates. Following his graduation from Yale, he began practicing law in New Haven where he specialized in matrimonial law until his retirement in 2012.
Jim was a well-respected and active member of his community and the New Haven County, Connecticut, and American Bar Associations for 62 years, serving many volunteer leadership positions including President of the New Haven County Bar, President of the CT Bar Association, President of the Connecticut Chapter of the American Academy of Matrimonial Lawyers, and President of the New Haven Symphony Orchestra. He also served on the Board of Governors of the American Bar Association and the Board of Directors of Friends of Legal Aid.
He was the recipient of numerous awards recognizing him for his service and dedication including the CBA Distinguished Professional Service Award, New Haven Legal Assistance Association (LAA) Equal Access to Justice Award, the New Haven County Bar Lifetime Achievement Award, and the New Haven LAA Lifetime Achievement Award.
Jim was a progressive thinker who was ahead of his time, generously devoting his attention to causes in which he believed. He successfully convinced members of the New Haven County Bar to agree to recognize the New Haven LAA. Some of his most gratifying work was with Hillary Clinton on the Commission on the Status of Women in the Profession, whose work improved the working environment for women in the law. His annual weekend retreats with "The Dirty Thirty," a prestigious professional and social group of family law attorneys, brought him great joy and many close friendships. Throughout his career, he unfailingly maintained the highest standards of practice: an ethical, peaceful, even-keeled gentleman, always.
To his family, Jim was known for his kindness, intelligence, humor, steady nature, and, especially, his generosity. Jim provided many words of wisdom often quoted to this day, and he was a willing source of humorous anecdotes about his quirks and unfiltered observations. He lived his life to the end, following his favorite principle: "and this above all; to thine own self be true."
Jim will be greatly missed by his wife of 39 years, Joyce (MacDonald) Greenfield, and his stepchildren Kristin Alexander (Gilbert) of Arlington, MA, Kurt Koehler of Darien, CT, and Heidi Rogers (Andrew) of Fairfield, CT, as well as his step-grandchildren, William Koehler, Ethan and Sam Alexander, and Drew and Evelyn Rogers. He will also be missed by his close family in California and New Jersey.
Donations in Jim's honor may be made to the New Haven Legal Assistance Association, 205 Church Street, New Haven, CT 06510, or the charity of your choice.
If you would like to be notified of a Memorial Service to be scheduled in October, please email [email protected]
To plant trees in memory, please visit our Sympathy Store.
Published by The New Haven Register on Sep. 10, 2019.
MEMORIAL EVENTS
No memorial events are currently scheduled.
To offer your sympathy during this difficult time, you can now have memorial trees planted in a National Forest in memory of your loved one.
MAKE A DONATION
Please consider a donation as requested by the family.
MEMORIES & CONDOLENCES
Sponsored by NHRegister.com.
7 Entries
Sincere sympathy for your loss, Joyce
Sending you lots and Lots of love
Jane Herbert
September 27, 2019
Uncle Jimmy, Rest In Peace
Love Ken, Deirdre, Morgan and Lindsey
Ken Greenfield
September 20, 2019
Jim was a very kind and gentle man and a distinguished professional. I have always had great admiration and respect for Jim and he will be greatly missed!
Michelle Lavigne
September 16, 2019
I worked at Greenfield , Krick and Jacobs law firm in 1986..Union Trust Bldg..
Jim was so nice a person ..he was well liked by all who
Came upon him ..he was a gentle , refreshing gentleman ..
Who was always mannered and distinguished ..
Of all the partners he was the favorite ..
My sympathies to his family ..
A loss of a fine person ..
Norma Lazzarini Cummings ..
Norma Lazzarini - Cummings
September 14, 2019
Jim was an elegant man, a fine lawyer and a terrific guy. Our condolences to Joyce and family.
Cary and Dick Jacobs
Caroline Jacobs
Friend
September 13, 2019
What a loss to this world. Jim was a wonderful advocate and someone who was always available to champion worthy causes in a dignified and effective manner.

We thoroughly miss you.Rest in Peace. condolences to Joyce.

Clarance Jones
Judge/Retired
September 12, 2019
Jimmy was my first cousin and knew him most of his life as I am a junior of only 87 years. Always looked up to him with great respect and admiration.
H=just knowing he was here, was so very important to me and my sincere sympathy to Joyce.
Norman Berger
September 11, 2019
Showing 1 - 7 of 7 results