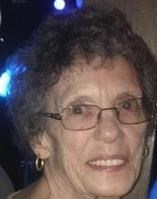 BORN
1937
DIED
2021
ABOUT
West Haven High School
FUNERAL HOME
Sisk Brothers Funeral Home - Hamden
3105 Whitney Ave.
Hamden, CT
Jane F. Sarno
In CT Hospice October 8, 2021 Jane F. Sarno, 83, of Hamden. Beloved wife of Michael J. Sarno. Loving mother of Michael C. Sarno of Hamden, Robert Belevich of Meriden and Bruce Belevich of FL, sister of Joan Ferraro (her best friend) of Hamden, Nancy Vagnini of Hamden, Irene Miller of West Haven, Sandra Laudano of East Haven and Lorraine Brewer of Pompano Beach, FL. Predeceased by brothers James and David Brewer and a sister Pauline Sargolini. Mrs. Sarno grew up in W. Haven, graduated West Haven High School Class of 1955. After high school she worked as a waitress at several restaurants including Stowes & Jimmies. She married Mike on January 1, 1970. She helped Mike operate Boat Gannet Seafood on Grand Ave. until 1975. They moved the business to Hamden and in 1980 brought their business to Thurston Foods to help them with their new seafood division until 1986. In the early 90's she went to work for her brother-in-law Sal Ferraro, Sr. and his sons to help them with their newly added seafood section at Ferraro Foods in New Haven until her retirement in the late 90's. Jane had talents in many things including cooking, baking, sewing, gardening, arts and crafts, hair cutting, even homemade Halloween costumes. There was not much she could not do. Jane was very loving and giving and never forgot her great-nieces and nephews and many of Michael's friends kids, sending cards at holiday's and birthdays and homemade personalized Gingerbread Men at Christmas time. When Jane took an interest in something, she learned all about it and helped her husband Mike compile his Western movie star collection, and her son Michaels baseball memorabilia and card collection. To describe Jane in one word, selfless; she put others before herself and no matter how much pain she was in she never complained and just kept going. We would like to give a special thanks to the entire Ferraro family who always respected and honored their Aunt Jane. Being around the Ferraro's helped give her a happy life. Jane was born in West Haven December 24, 1937, daughter of the late Frank and Pauline Brewer. Her funeral will leave Sisk Brothers Funeral Home, 3105 Whitney Ave., Hamden Friday at 9:30 a.m., Mass of Christian Burial at 10 a.m. in Blessed Sacrament Church. Burial in Beaverdale Memorial Park. Calling hours are Thursday from 4 - 8 p.m. In lieu of flowers, contributions to Smilow Cancer Center, PO Box 7611 New Haven, CT 06519-0611. To leave an online condolence, please visit www.siskbrothers.com

Published by The New Haven Register on Oct. 11, 2021.
To plant trees in memory, please visit the Sympathy Store.
MEMORIAL EVENTS
Oct
14
Calling hours
4:00p.m. - 8:00p.m.
Sisk Brothers Funeral Home - Hamden
3105 Whitney Ave., Hamden, CT
Oct
15
Funeral
9:30a.m.
Sisk Brothers Funeral Home - Hamden
3105 Whitney Ave., Hamden, CT
Oct
15
Mass of Christian Burial
10:00a.m.
Blessed Sacrament Church
CT
Funeral services provided by:
Sisk Brothers Funeral Home - Hamden
MAKE A DONATION
MEMORIES & CONDOLENCES
Sponsored by NHRegister.com.
5 Entries
We are so sorry for the loss of such a precious soul as Jane. Our deepest sympathy and condolences to all Jane´s loved ones.
Benedetto Minichino
Friend
October 16, 2021
Jane you were a rare jewel. Never thinking twice you never refused to help....no matter the situation. To my cousin Mike and family I wish you peace and love. She sleeps with the angels.
Maria Smith
October 13, 2021
Thank you for all the Great Memories as we certainly shared them. Sending, Love Strength and Condolences to Family and Friends.
Jerry Lehr
October 11, 2021
We are so sad to hear of the loss of our friend Jane. We love you. See you in the next life.
Jim and Chris Mazziotti
Friend
October 11, 2021
I had the pleasure of meeting Jane only a few times . Very gracious, interesting and generous. She gifted one of her meaningful possessions to me several years ago even though we only met a few times. I treasure this thoughtful gift. She will be fondly remembered and deeply missed. Rest In Peace Jane
Gail Heston
Friend
October 11, 2021
Showing 1 - 5 of 5 results