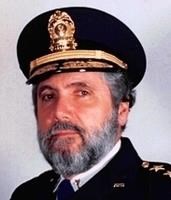 FUNERAL HOME
Beecher and Bennett Funeral Home - Hamden
2300 Whitney Avenue
Hamden, CT
John P. "Jack" Ambrogio
John P. "Jack" Ambrogio, Ret. Chief, HPD, age 87, beloved husband of Maureen O'Connor Ambrogio, passed away at Yale-New Haven Hospital on June 19, 2021. John was born on March 25, 1934 to the late Rose DelGrego Ambrogio and William Ambrogio. He grew up in Hamden and graduated from Hamden High School. After serving in the United States Army, he joined the Hamden Police Department in 1956. He was appointed Police Chief by Mayor Lucien DiMeo on September 5, 1974 and continued to serve until his retirement on October 7, 1998. Chief Ambrogio sought to improve the quality of the service of his organization. Recognizing the need for better communication with the public, he sought the help of Hamden Mental Health Services. Under the direction of Dr. Tom Reid, the officers took part in training sessions of crisis intervention. He then established a victim service unit. Chief Ambrogio encouraged the further education for the officers. He required psychological exams as part of hiring. He was immensely proud of the officers he served with. Chief Ambrogio served as a past president of the Connecticut Police Chiefs Association. John was a member of the Knights of Columbus, where he was a Fourth Degree Knight. He belonged to the Amity Club and enjoyed the Bocce Club.
He leaves to cherish his memory daughters Gayle Horan (Sean), Jacquelyn Bouvier (Edouard), Pamela Doolan (Robert), and Valerie Kammerer (Eric), and daughter-in-law Sandra Ambrogio. He is also survived by his grandchildren, who gave him such joy; Jonathan and Noelle Bouvier, Alexandra and Melissa Doolan, Veronica Ambrogio Romee, William Kammerer, and Emily Horan, and two great-grandchildren Kisa and Dante Romee; his brother, Anthony "Pat" Ambrogio and his wife Rose, his brother in-law and great friend Nicholas Bauer and sister in-law Denise O'Connor Bauer; and many nieces and nephews. He was predeceased by his son John Ambrogio, and brothers Alfred Waltermire and Robert Ambrogio.
Funeral will be from Beecher & Bennett Funeral Home, 2300 Whitney Avenue, Hamden, Thursday June 24th at 9:00 a.m. followed by his Mass of Christian Burial to be celebrated at 10:00 a.m. at Our Lady of Mount Carmel Church, Whitney Ave., Hamden. Friends may also visit with his family at the funeral home on Wednesday from 4:00 to 7:00 p.m. Burial will be private. Contributions in Chief Ambrogio's memory may be made to the St. Jude Children's Research Hospital, 501 St. Jude Place, Memphis, TN 38105, www.stjude.org. To send condolences to Chief Ambrogio's family, please visit www.beecherandbennett.com.

Published by The New Haven Register on Jun. 21, 2021.
To plant trees in memory, please visit the Sympathy Store.
MEMORIAL EVENTS
Jun
23
Visitation
7:00p.m.
Beecher & Bennett Funeral Service - Hamden
2300 Whitney Avenue, Hamden, CT
Jun
24
Mass of Christian Burial
10:00a.m.
Our Lady of Mt. Carmel Church
2819 Whitney Avenue, Hamden, CT
Funeral services provided by:
Beecher and Bennett Funeral Home - Hamden
MAKE A DONATION
Please consider a donation as requested by the family.
MEMORIES & CONDOLENCES
Sponsored by NHRegister.com.
5 Entries
Thank you Chief Ambrogio. You were there for us in our time of need.
Walt Harris
June 25, 2021
So sorry to hear about Jackie my mom sends her sympathy.she remembers her cousin foundly.
Jodie lande and Betty jo Delgrego
June 24, 2021
So very sorry to learn of the Chief's passing. Such a wonderful and dedicated individual with a great family. Condolences to all.
Larry / Arnold Lazaroff
Friend
June 24, 2021
Jack was one of my earliest friends and mentors when I moved to Hamden as a member of Hamden Mental Health Service. He was open to creative collaboration through work but more importantly he became a treasured friend with whom my wife and I spent time. I remain ever grateful for the contribution he was to my work and life. Condolences to all those who loved and respected him.
Thomas Reid
Friend
June 22, 2021
So sorry to hear this news. I worked for Jack and his wife years ago what a really nice couple. Gave us brunch on real china we thought it was so funny. Just sending my condolences. Rip Chef
Edward Collier
June 22, 2021
Showing 1 - 5 of 5 results