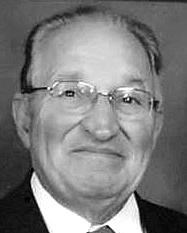 BORN
1931
DIED
2015
FUNERAL HOME
Iovanne Funeral Home
11 Wooster Place
New Haven, CT
PONTECORVO, LOUIS W. Louis W. Pontecorvo, age 83, passed away on Thursday, April 16, 2015 in Hartford Hospital. He is the husband of Carol Bentley Pontecorvo. Born in New Haven, CT on June 9, 1931 to Michael J. and Rose Gogliettino Pontecorvo, he was a proud US Army veteran. He is the father of Louis, Charles, Michael (Angela) Pontecorvo, Douglas (Jennifer) and Richard Jayne, and Carl (Nicole) Voisine. Brother of the late Arlene Amore, and Dolores and Edmund Pontecorvo. Also survived by 8 grandchildren and one nephew, Scott Amore. Louis was predeceased by his first wife Arlene Gollon Pontecorvo. Louis was a professional musician who played trumpet for some of the greatest musicians in the world, including Sarah Vaughan, Nat King Cole, Tom Jones, and Tony Bennett. He performed at Oakdale Musical Theatre for 23 years. When he was not performing, he taught privately and as a music educator in Wolcott, CT for 33 years. Louis graduated from the Hartt School of Music, and from Yale University with a Master’s degree. He is an alumnus of the West Point Military Academy where he played in the West Point Band for President Eisenhower, among others. He was former President of the New Haven Federation of Musicians, and the Wolcott Education Association. Louis taught his family and friends the true meaning of the most important words, as he would say, in the English language: Love, and Care. He loved life and would often tell family and friends that life is the greatest gift of all. As he is laid to rest, his family recognizes that he was the greatest gift to us. Funeral from the IOVANNE FUNERAL HOME INC. 11 Wooster Place Tuesday morning at 9:30. Mass of Christian Burial in St. Michael’s Church at 10. Burial in St. Mary’s Cemetery, New Britain. Visiting hours will be Monday from 5-8pm. In lieu of flowers, donations can be made to WAG, We Adopt Greyhounds, 123 Pond View Drive, Southington, CT 06489. Sign Louis’ guest book online at www.iovanne.com

Mr. Pontecorvo was not only a wonderful musician but a wonderful man as well. A great combination. Our deepest sympathy to the entire family.

We are so saddened to hear of Lou's passing. When we lived in Cheshire from '68-'98, I resumed trumpet lessons from him, and I think he was happy when I decided to stop. He was too kind to suggest it. His 1st wife, Arlene, taught our 2 daughters, Karen and Amy, in grammar school.

Lou was a real gentleman (and patient, too). You all have our sincerest condolences. May he rest in peace.
Elliott & Elissa Donn
April 19, 2015
Dear Carol, Mike, and the rest of the Pontecorvo Family,

Jen and I are truly saddened at the loss of Lou. He was such a kind man and a very talented one!

I used to look forward to his responses when I'd email him my "Saturday Night Nostalgia" list of youtube videos. It seemed that he had accompanied or met almost every famous singer and band we've ever heard of! What wonderful stories and memories he had to share!