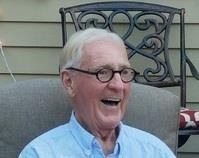 BORN
1927
DIED
2018
FUNERAL HOME
Swan Funeral Home
80 East Main Street
Clinton, CT
Schiess, Richard J.
After 90 years, Richard J. Schiess whistled his last song and left this earthly life in the early morning of Tuesday, April 17, 2018. Born in September 1927, he was a man both of his time and ahead of his time. At the tender age of 17, he joined the Navy and served out the final months of World War II bringing soldiers home from battle. He returned home to Harrison, New York, the town where he was raised as the middle child of Charles and Hermine Schiess. He graduated from Manhattan College in 1950 and married Caryl Corbetta in l953. Together they went on to raise a large family. Richard was one of the original Mad Men, that breed of New York Advertising executives who worked hard, played hard, and retired to the suburbs at night. In his role as father, he was known for changing diapers, giving baths, pushing strollers, and putting his children to bed, never forgetting to add a story and a song. Richard's fierce and independent streak, coupled with a dream of being his own boss, propelled him to move his family to Madison, Connecticut in l972 where he became the owner of a local retail business. Richard found his niche in small town life and greeted everyone with a whistle, smile, and a hello. Everyone would say that the words "devoted," "hardworking," and "reliable" characterized him as both a business man, a family man and friend. In his later years, Richard enjoyed the pleasures of the front porch at Lake Sunapee, walks at Hammonasset beach, tending his garden and flowers at Act ll, telling jokes, buying gifts, and the antics of his dog Sassy. Richard volunteered his time and talents to both the Killingworth library and drove for the Madison community services. In addition to his family, his professional alumni group held a special place in his heart. He was predeceased by his brothers Charles and Bobby. Richard will be dearly missed by his loving wife and his eight children who never missed celebrating a birthday, holiday, or a milestone with him. He is survived by his wife of 64 years, Caryl and his children, Kate and David Summerlin, Mary-Caryl and Don Goff, Jean and Pete Menzies, Eileen Schiess, Amy (Leighton) Schiess, Christopher (Laura)Schiess, David Schiess and John and Michelle Schiess in addition to 11 grandchildren and many nieces and nephews. A memorial service will be held in June. Donations in Richard's name can be made to Connecticut Hospice or the Killingworth Library.
Published by The New Haven Register on Apr. 24, 2018.
To plant trees in memory, please visit the Sympathy Store.
MEMORIAL EVENTS
To offer your sympathy during this difficult time, you can now have memorial trees planted in a National Forest in memory of your loved one.
Funeral services provided by:
Swan Funeral Home
MAKE A DONATION
MEMORIES & CONDOLENCES
Sponsored by NHRegister.com.
5 Entries
Richard and Family are in our prayers. Fair Winds and Following Seas Sailor. God Speed. Phil Colon, Manhattan College Prayer Group.
Philip J. Colon
May 2, 2018
Genuinely one of the most interesting people I have ever had the pleasure of meeting - worked with Richard for several years at the Killingworth Library back 20 years ago. I truly value that time I was able to spend with him!
Nate Dudek
April 24, 2018
To the family of Richard, my condolences, I am very sorry for your loss. I worked with Richard at Blue Cross Blue Shield, needless to say he was a pleasure to work with and a most remarkable man.

Linda
April 24, 2018
One of the greats. I'll miss you.
Laura Sohl
April 23, 2018
The Manhattan College alumni community shares the grief, and is now praying for our fellow alumni and the family at this time. The Alumni Office has been informed. As well as the Jasper Jottings community that I personally can reach. We are all a little poorer now. "No man is an island, entire of itself ... any mans death diminishes me". We are sorry for your loss.
fjohn (MC1968) reinke
April 23, 2018
Showing 1 - 5 of 5 results