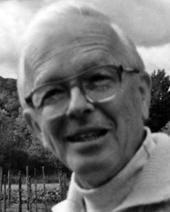 HENDERSON, WILLIAM ARTHUR, JR. William Arthur Henderson Jr. passed away peacefully on Easter Sunday, in the sunny Madison home he loved. Bill, 81, was born in Winthrop, Massachusetts, on October 5, 1932, son of the late William and Hannah (McMann) Henderson. Despite severely impaired hearing, Bill earned a BA from Harvard in 1954 and an MS and PhD in organic chemistry from Yale in 1958. He spent his entire career at American Cyanamid in Stamford, held over 20 chemistry patents, was named an Associate Research Fellow, and twice received Cyanamid’s prestigious Scientific Achievement Award. Bill leaves behind his adoring wife, Audrey Tesch Henderson, herself a chemist. For nearly 54 years, they shared a beautiful, peaceful home, numerous hobbies, and a deep love of family. Bill is survived by his daughter, Amy Joy Henderson, and her husband, Luigi Bergomi, of Ardsley, NY; and by his son, William Arthur Henderson III, and his wife, Masumi Sakakibara Henderson, of Hillsborough, NJ. He was a very proud, loving grandfather to Elena and Lorenzo Bergomi and William IV and Andrew Henderson. Bill also leaves behind his brother, R. James Henderson, his wife Maryfaith, and a niece, Kathryn Henderson, of Massachusetts. Bill loved nature; his hobbies included bird-watching, fly fishing, and gardening. He was a skilled woodworker, tenderly crafting many pieces of furniture and sets of Shaker boxes for family and friends. He was also an avid mineral collector with an extensive collection, and for many years wrote a bimonthly column for Mineralogical Record magazine. Bill frequently helped professional mineralogists by sending them specimens of interesting, possibly new, minerals, one of which was ultimately named willhendersonite, in his honor. In 1990 Bill retired to Madison, and he loved this area, particularly enjoying walks at Chatfield Hollow and Hammonassett. He was a longtime member of the Madison Winter Club. Most importantly, Bill was a wonderful man—fiercely intelligent, enormously funny, deeply principled, and endlessly kind—a quiet, strong gentleman, who will be sorely missed, but lovingly remembered. A gathering of family and friends will be held later this spring among the gorgeous azaleas he and Audrey propagated and planted around their home. Bill’s family wishes to thank the staff of Strong House in Madison for the joy they gave him last year, and the nurses, therapists, and aides of Middlesex Hospice and Palliative Care for the kind and gentle support they provided during the past two months. Arrangements are with the Hawley Lincoln Memorial, Guilford. To sign the online guest book, please visit hawleylincolnmemorial.com.
To plant trees in memory, please visit our Sympathy Store.
Published by The New Haven Register from Apr. 26 to Apr. 27, 2014.
MEMORIAL EVENTS
No memorial events are currently scheduled.
To offer your sympathy during this difficult time, you can now have memorial trees planted in a National Forest in memory of your loved one.
MEMORIES & CONDOLENCES
0 Entries
Be the first to post a memory or condolences.