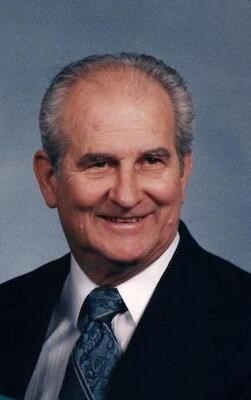 Newport - Gene Joseph Seibert, passed away peacefully on Friday, April 9, 2021, 11 days before his 96th birthday, surrounded by family. Gene was married to Lucy "Lou" Seibert (nee Leick) for 51 years before her death in 1999. He was also preceded in death by his parents, Henry P. and Gertrude Seibert (nee Lampe); step-mother, Alma Seibert (nee Kroger); brothers, Henry Jr., Jack, Dick, and Joe Seibert. Gene is survived by his 8 children, sons, Gene M. (Maria), Steve (Linda), Denny (Terri), Mark (Nila), Greg, Doug (Mary), and Pat (Diane) Seibert; daughter, Debbie (Steve) Ruberg; sister, Gertrude Smith; brother, Donald Seibert; sisters-in-law, Pam Seibert and Iva Leick; his beloved first daughter-in-law, Cathy Swanton; 21 grandchildren and more than three dozen great-grandchildren and counting, as well as many grandchildren-in-law, nieces, and nephews. Gene served in the US Navy during WWII as a gunner's mate 1st class. Except for his time overseas, and time spent with family members over the last 2 ½ years, Gene lived his entire life in Newport, KY. Gene was a master craftsman golf club maker at MacGregor Brunswick for most of his work career, only switching to protective equipment when the golf division moved to Georgia. Gene had the opportunity to pursue his work in Georgia and Arkansas, but he wouldn't uproot his family or separate them to leave Newport. When he retired, he continued to make and repair golf clubs out of his home. Gene was first and foremost, a family man. He kept up with the lives of his children, grandchildren, and great grandchildren. He was supremely interested in all of them. Gene leaves behind a legacy of love, pride and strength in character. Gene was fulfilled with the last sacraments. Visitation 11:00 am until 1:00 pm on Tuesday, April 20 at Holy Spirit Catholic Church, Newport with Mass of Christian Burial following at 1:00 pm. Burial in St. Stephen Cemetery, Fort Thomas. Due to Covid 19, masks and social distancing are required. In lieu of flowers, donations may be made to Holy Spirit Catholic Church Outreach Ministry, 825 Washington Ave., Newport, Kentucky 41071 or to the charity of your choice. Online condolences to dmefuneral.com. Dobbling, Muehlenkamp-Erschell Funeral Home is serving Gene and his family.

Published by Kentucky Enquirer from Apr. 14 to Apr. 17, 2021.
To plant trees in memory, please visit the Sympathy Store.
MEMORIAL EVENTS
Apr
20
Visitation
11:00a.m. - 1:00p.m.
Holy Spirit Catholic Church
Newport, KY
Apr
20
Mass of Christian Burial
1:00p.m.
Holy Spirit Catholic Church
Newport, KY
Funeral services provided by:
Dobbling, Muehlenkamp-Erschell Funeral Home
MAKE A DONATION
Please consider a donation as requested by the family.
MEMORIES & CONDOLENCES
Sponsored by Dobbling, Muehlenkamp-Erschell Funeral Home.
1 Entry
Gene was a great guy. A GREAT Family man and friend to all he knew. Thanks for the memories Gene, Thanks for serving on the LST 806. It was a pleasure to know you and the family I met. I Will miss you and the stories So glad we were able to be together for the reunions it really meant a lot to Ralph and me.
Lois Staten
Friend
April 15, 2021
Showing 1 - 1 of 1 results