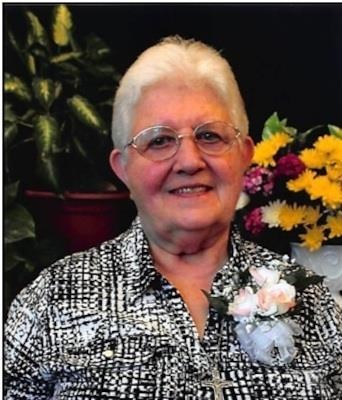 Covington - Marjorie Ann Thiel was born on October 8, 1935, to Joseph and Marian Thiel in Covington, Kentucky. She was the oldest of three children. Her family was devoted and faith-filled. Marjorie graduated from Notre Dame Academy in 1954. Shortly after graduating, she entered the Sisters of Notre Dame, where she made her profession of vows on August 17, 1957. Sister Marjorie Marie (formerly Sister Joseph Anne) received her Bachelor of Arts in Education from Villa Madonna College (now Thomas More University) in 1968 and furthered her education with a Master of Education at Xavier University in 1975. As a novice, she started her teaching ministry, which ranged from Harlan, in the mountains of Kentucky, to the suburbs of Dayton, Ohio. She taught all grades from kindergarten to eighth. Sister's teaching experience also gave her the ability to serve in other roles. She was a group mother at St. Aloysius Orphanage and the Diocesan Catholic Children's Home, where she provided stability in many children's lives. She also worked as the librarian at St. Augustine School, Covington, Kentucky, and St. Joseph Heights. She was even called to assist in the library at the Motherhouse in Rome for three years. As Sister Marjorie Marie transitioned to retirement, her ministry focused on her community. She served in many facets of community life, working in activities, transportation, and the retirement and tutoring programs. She also enjoyed assisting as communion minister at St. Elizabeth Hospital for over ten years. Sister Marjorie Marie went home to God peacefully on June 23, 2021. Sister is preceded in death by her parents. She is survived by her younger sister, Sister Mary Juanelle Thiel, SND, and her younger brother, Joseph Thiel. Sister also leaves behind beloved nieces and nephews.

Published by Kentucky Enquirer from Jun. 25 to Jun. 26, 2021.
To plant trees in memory, please visit the Sympathy Store.
MEMORIAL EVENTS
Jun
28
Visitation
3:00p.m.
St. Joseph Heights chapel
KY
Jun
28
Wake
3:45p.m.
St. Joseph Heights chapel
KY
Jun
28
Mass of Christian Burial
KY
Funeral services provided by:
Middendorf-Bullock Funeral Home
MAKE A DONATION
MEMORIES & CONDOLENCES
Sponsored by Middendorf-Bullock Funeral Home.
1 Entry
So sad that this world doesn´t have the wonderful Sister Marjoire anymore, but I am rejoicing that she is now in Heaven. Sister Marjorie was my absolute favorite person to talk to at the Thiel family reunions. I loved hearing about her time in Rome and talking about our faith journeys. She was such an inspiration of someone who ran the good race. I can just imagine her entering into Heaven and hearing "well done my good and faithful servant."
Katie Jensen
Family
June 26, 2021
Showing 1 - 1 of 1 results