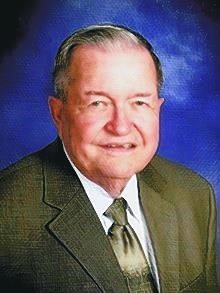 FUNERAL HOME
Honaker Funeral Home
1751 Gause Blvd. West
Slidell, LA
Donald F. Hulin, 88, a native of Slidell, and a former resident of Harahan, Avondale, and Chalmette, passed away on Tuesday, July 20, 2021, in Slidell. Don was born March 7, 1933, in New Orleans, Louisiana, to Frederich and Gladys Hulin, and was a 1951 graduate of Jesuit High School in New Orleans. After growing up in the grocery store business, he became involved in the grocery wholesale business. Don was also an auxillary policeman in Jefferson Parish. He was greatly involved in the Catholic Church and was a longtime member of the Knights of Columbus. Don loved Mardi Gras and would not miss a parade. Don was preceded in death by his second wife, Alma Fertitta Hulin; sister, Janice Wright; and a grandson, Drew McGovern. Don is survived by three children, Linda Peres (Mike), Karen Sofio (Lindsay), Peggy Pazos (Michael); one sister, Helen Wingerter; grandchildren, Nicole Breaux, Rachel Wallace, Ashleigh Stagg, Josh Pazos, Devynne Pazos, Lisa Southern, Angela Southern Caruso; stepdaughter, Carmel Fertitta; great-grandchildren, and numerous other relatives. A Funeral Mass will be celebrated at St. Luke the Evangelist Catholic Church, 910 Crossgates Blvd, Slidell LA 70461, on Wednesday, July 28, 2021. Visitation will begin at 10:00am followed by the Funeral Mass at 11:00am. Burial will be in Forest Lawn Cemetery. Please visit www.honakerforestlawn.com to sign guestbook. Arrangements by Honaker Funeral Home, Inc., Slidell, LA.

Published by The Times-Picayune from Jul. 24 to Jul. 28, 2021.
To plant trees in memory, please visit the Sympathy Store.
MEMORIAL EVENTS
Jul
28
Visitation
10:00a.m.
St. Luke the Evangelist Catholic Church
910 Crossgates Blvd, Slidell, LA
Jul
28
Funeral Mass
11:00a.m.
St. Luke the Evangelist Catholic Church
910 Crossgates Blvd, Slidell, LA
Funeral services provided by:
Honaker Funeral Home
MAKE A DONATION
MEMORIES & CONDOLENCES
Sponsored by Honaker Funeral Home.
7 Entries
Don was the first person i met at St. Luke truely will miss him very much. He included me in everything he did. RIP my Friend.
Raymond LaNoue
Friend
July 30, 2021
As a member of Ochsner Golden Opportunity, Don enjoyed the many activities the program provided such as educational meetings and local field trips. We will all miss him!
Christie Trew
Friend
July 28, 2021
Don will truly be missed. He served us well as captain of our Saturday Eucharistic Ministers. Always a true gentleman. May fond memories sustain you in the loss of your loved one. Rest in peace Mr Don, in the loving arms of Jesus.
Linda Rajki
July 28, 2021
Grief can be so hard, but our special memories help us cope. Remembering you and your loved one today and always. I was sorry to hear about Donald may he rest in peace with GOD.
Stanley Barbier
Family
July 27, 2021
Mr Donald will be terribly missed. He was always so sweet. I have such fond memories of him and dancing with him at the dances at St. Luke. I am so thankful i got to know you. R.I.P. Mr Donald.
.
Cynthia A Landry
Friend
July 27, 2021
Mr. Hulin always wanted to be of service. He visited my office to ensure he was scheduled as an usher or Eucharistic Minister. He shared a little of his life story with me which was humble and impressive. We will miss him.
Kay Guard
July 26, 2021
Don always had a smile for everyone & was a true christan may he RIP
Carl Cucullu
July 26, 2021
Showing 1 - 7 of 7 results