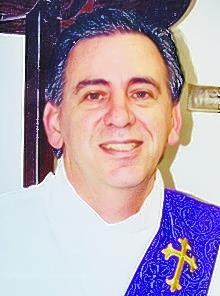 ABOUT
Redemptorist High School
FUNERAL HOME
Audubon Funeral Home and Cremation Services
61101 Highway 11
Slidell, LA
Deacon Paul Augustin entered into eternal rest on November 1, 2021, the Feast of All Saints, at the age of 64. Born in New Orleans, Louisiana, Deacon Paul lived in Slidell for the past 40 years. He was a graduate of Redemptorist High School and UNO where he also received his MBA. He was ordained to the permanent diaconate in the Archdiocese of New Orleans on December 13, 2008. Paul served as deacon at St. Luke the Evangelist Catholic Church in Slidell and as chaplain for Cafe Reconcile for his ministry of charity. He worked at the Center for Restorative Breast Surgery for the past 12 years as the Chief Technology Officer. To Paul, if something was worth doing it was worth overdoing; from building a family swing set to withstand a category 5 hurricane, to devoting his life to serving and loving those in his family and his community. He was a long time participant in Marriage Encounter and regular participant for 30 years at Manresa House of Retreats. His love for conversing with others and sharing the faith led to his call to the Diaconate. He enjoyed gardening, and cooking. He was passionate about sports: playing, coaching, and watching. He was a devoted Saints and LSU fan, an avid racquetball and basketball player, and an even more enthusiastic youth sports coach for his children. But most of all, his greatest joy was spending quality time with his wife and family. Deacon Paul is survived by his beloved bride of 41 years, Pamela Quarles Augustin; his mother, Anna Roccaforte Augustin; his sister, Geri Wright (Roger); his brother, Raymond P. Augustin, Jr. (Jean); and his three children, Paul Augustin, Jr. (Heather), Nicole A. Reed (Chris), and Daniel Augustin. Affectionately called Granddaddy, he is also survived by 12 grandchildren: Joshua, Joseph, Gianna, and Isabella Augustin; Jack, John, and Julia Vu; and Evie, Jo, Levi, Max, and Rosalie Reed. He is also survived by in-laws, Jack Quarles, Jr. (Dorothy), Lynda Q. Mullen (Toby), and many loving nieces and nephews. He is preceded in death by his father, Raymond P. Augustin. Visitation will be at St. Luke the Evangelist Catholic Church in Slidell, Louisiana from 6:00 p.m. to 8:00 p.m. on Friday, November 5, 2021, and on Saturday, November 6, 2021, from 11:30 a.m. to 12:30 p.m. to be followed by a Mass of Christian Burial at 1:00 p.m. with Archbishop Gregory Aymond as the principal celebrant. Interment to follow at St. Joseph Abbey Cemetery. The family requests that all attendees please wear masks. Memories and condolences may be expressed at www.AudubonFuneralHome.com.

Published by The Times-Picayune from Nov. 3 to Nov. 6, 2021.
To plant trees in memory, please visit the Sympathy Store.
MEMORIAL EVENTS
To offer your sympathy during this difficult time, you can now have memorial trees planted in a National Forest in memory of your loved one.
Funeral services provided by:
Audubon Funeral Home and Cremation Services
MAKE A DONATION
MEMORIES & CONDOLENCES
Sponsored by Audubon Funeral Home and Cremation Services.
4 Entries
I am most sorry to learn of Paul's passing. I have fond memories of our years together at Our Lady of Lourdes and Redemptorist High School. May God bless Paul and family. Peace be with you all at this difficult time.
Kevin E. Hughes
November 4, 2021
We will always cherish our memories of Deacon Paul. He was a true example of how we each should live our lives. I am so grateful that our daughter Heather married into his family and that we share grandchildren together. Love and peace to all.
Kevin and Marcia Law
Family
November 4, 2021
May his blessed soul rest in peace. He was a special person , who loved his God and Fellow man. Amen.
Ann Marie Birabent
Other
November 4, 2021
I use to work with Paul at the Center for Restorative Breast Surgery and he was the nicest guy to work with. My deepest sympathy to his family and may he Rest in Peace.
John Favaloro
Work
November 3, 2021
Showing 1 - 4 of 4 results