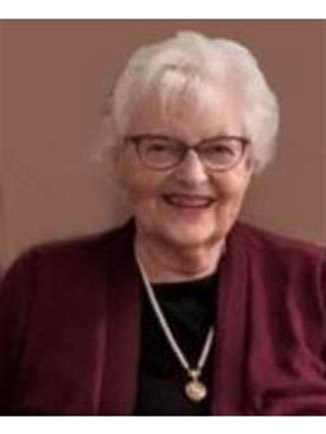 Eleanor Ann Miller was born on September 9, 1934, to Leon and Esther Miller in Ottumwa, Iowa. Ellie and her sister Elizabeth grew up in Knoxville, IA. At 6 years of age, she contracted polio (along with her father). She survived the disease and didn't let it stop her from enjoying all the good things in life. After graduating from Knoxville High School, she went to Simpson College, where she pledged with the Pi Beta Phi Sorority. There, she met her first husband, Gary Ogden. After getting engaged, she earned her college degree in three years so that they could marry immediately following their graduation. Afterward, they moved to Arlington, VA as Gary served in the Army for 2 years. After that, they moved back to Iowa and had children Lori, Scott, and Janet. They resided there until 1968 when they moved to Northfield, MN.

Eleanor taught elementary school for 38 years. Not only did she teach thousands of children to read, but she was also considered a teacher of teachers and mentored many peers during her career. She led her classrooms with a caring and open heart. Ellie continued her own education while educating others. By the time she retired, she had earned her masters plus 60 degree.

In 1973 she married Alfred Salisbury. They blended her children, Lori, Scott, and Janet with Al's children, Joedy, Robert, Betty Jean, Richard, and JoAnn. Holidays and family celebrations were a grand affair with many in attendance. Ellie and Al built their farm home atop a hill in Northfield in 1979. At their Hilltop Farm, they raised miniature ponies and often rode and displayed them during The Defeat of Jesse James Days events. They resided there together until he died in 2002 and she remained there alone until she moved "into town" in 2012.

Her granddaughters Nicole, Emily, and Alana resided in Northfield, which allowed Ellie lots of opportunities to spend special time with them. She taught them to read, watched their school productions, baked cookies, and taxied them to many activities. Their college educations were very important to Ellie, and she helped them to afford the experience.

Ellie had many interests and excelled at all she did, including hosting parties, sewing, investing in the stock market, playing piano and guitar, singing in the church choir, playing in the bell choir, participating in PEO, playing bridge, and so much more. Throughout her years she enjoyed traveling and visited such exotic locales as Hawaii, Portugal, Spain, Italy, Germany, Mexico, and many locations throughout the US. Many of these travel adventures were taken with her dear friends Hazel, Bonnie, Rachel, Bobbie, and Lee. During a trip to Spain, she took a side journey on her own to Morocco. For a few seasons, she wintered with her special friend Jack Anderson in Casa Grande, AZ.

Ellie's greatest love was her family. Holidays and family gatherings were filled with love and laughter. At Christmas, Ellie proudly offered many packages for each person. Whenever a listening ear and soothing hug were needed, Ellie was available. Throughout her life and firmly into adulthood, she had a special bond with her sister Elizabeth; they spoke on the phone every evening sharing details of their lives as well as investment tips.

She knew no strangers and greeted everyone with a warm and ready smile. Lovingly referred to as "Saint El", she could find the brighter side of everything and everyone. Though never a pushover, she didn't hold grudges and rarely showed an inkling of anger. She gave freely of all she had to offer and assisted many people and supported many causes throughout her life.

She was preceded in death by her parents, husbands, and stepdaughters Betty Jean Simons and JoAnn Fennel.

Ellie will be immeasurably missed by all who had the grand opportunity to know her. Her loving spirit lives on in all whose lives she touched.

Published by Northfield News from Nov. 30 to Dec. 14, 2021.
To plant trees in memory, please visit the Sympathy Store.
MEMORIAL EVENTS
To offer your sympathy during this difficult time, you can now have memorial trees planted in a National Forest in memory of your loved one.
Funeral services provided by:
Bierman Funeral Home - Northfield
MAKE A DONATION
MEMORIES & CONDOLENCES
0 Entries
Be the first to post a memory or condolences.