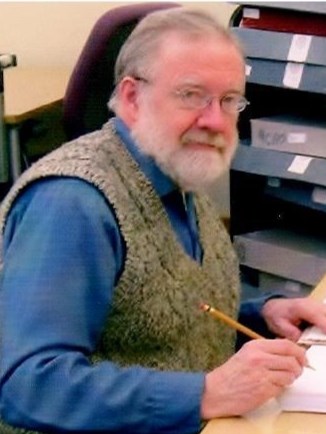 Following a short stint at the St. Paul Public Library, Randy returned to St. Olaf in 1962 as a Reference Librarian and stayed until retiring in 1996. Randy taught one of the first college courses on mystery and detective fiction in the United States, and after retirement led classes at the Cannon Valley Elder Collegium for many years.

Randy's passion for his interests led him to be an inveterate collector, beginning in childhood, and a highly regarded scholar in several areas. He was a dedicated Sherlockian, invested in the Baker Street Irregulars in 1967 (The Conk-Singleton Forgery Case.) He edited The Dime Novel Round-Up from 1994 through 2012 and was considered the foremost expert on Nick Carter. Randy served as an Editorial Advisor to English Literature in Translation from 1969-2008. He was an active member of the American Culture Association/Popular Culture Association from 1984-2005. In 2014 Randy was presented with the Munsey Award for his lifetime's efforts in promoting the pulps. He wrote several books and scores of articles and author profiles for a wide variety of publications.

Randy's collections were extensive, and included crime fiction, old-time radio, dime novels, comic books, juvenile series books, and cartooning. Never shy, he began writing to authors in high school and kept every piece of correspondence. Randy donated material to several universities around the country, with the bulk of his life's work in the Cox Collection at the University of Minnesota.

Most importantly, Randy was a true gentleman - a kind and gentle man who was tremendously generous in sharing his expertise and information with anyone who asked. Randy is survived by his brother, James Cox of Albert Lea, and an extensive network of friends and associates around the country. A faithful Christian who dedicated countless hours to the Episcopal Church as a layreader and warden at Holy Cross, Dundas and All Saints in Northfield.

Guests are invited to attend a service online at allsaintsnorthfield.org 1PM CST (later posting on YouTube) or masked and in- person at All Saints Episcopal Church, Northfield, Saturday, September 18 at 1PM. Burial will be at Groveland Cemetery in Dundas. biermanfuneralhome.com.