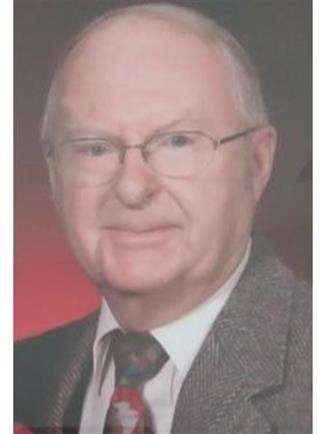 BORN
1930
DIED
2021
FUNERAL HOME
Anderson Funeral Home
659 Voyager Dr
Alexandria, MN
Alexandria, formerly of Northfield - Marland LeRoy Madson was born on August 1, 1930, the first child of Harold and Linnea (Warling) Madson, in Saint James, MN. He was baptized in the Norwegian Lutheran Church and confirmed in the First Lutheran Church. During his school years he worked on the family dairy farm and was active in 4-H. He graduated from Butterfield School as Salutatorian in 1948.

After graduating in 1952 from St. Olaf College he was drafted and served two years in the United States Army. From 1955 to 1964 he taught in the Alexandria Public Schools. It was there that he met Grace Carlstrom, a receptionist in the Superintendent's office. They were married at First English Lutheran Church of Alexandria on July 29, 1956 and together they had three sons and one daughter.

During the next five years he received two Masters Degrees and a PhD. He returned to St. Olaf in 1969 where he taught in and chaired the Department of Biology until his retirement in 1993. Every summer of his married life, Marland, Grace and family lived on Lake Darling in Alexandria where he designed and built golf courses and managed all outdoor recreational activities at the Darling Dude Ranch, which later became the Arrowwood Resort and Conference Center. After retiring from Arrowwood in 1988 he and Grace continued to spend each summer on Lake Darling until 2016.

Marland always considered himself a sinner saved by grace and attempted to direct his life around three principles: Continue to develop spiritual growth and love for his Savior Jesus; continue to provide opportunities that would increase merited love and respect from his wife and children; and, in the eyes and minds of his many students, be an excellent teacher and an example of living a Christian life.

Marland moved back to Alexandria in August of this year to be closer to his family and felt like he had "come home." His family was blessed to be with him daily until his death.

In lieu of flowers, please consider donating to Knute Nelson Hospice or Mount Carmel Ministries. The family wishes to thank the wonderful and caring staff of Grand Arbor and Knute Nelson Hospice for the outstanding care that Marland received. Arrangements were with the Anderson Funeral Home. www.andersonfuneral.net
Published by Northfield News from Nov. 22 to Dec. 6, 2021.
To plant trees in memory, please visit the Sympathy Store.
MEMORIAL EVENTS
To offer your sympathy during this difficult time, you can now have memorial trees planted in a National Forest in memory of your loved one.
Funeral services provided by:
Anderson Funeral Home
MAKE A DONATION
MEMORIES & CONDOLENCES
0 Entries
Be the first to post a memory or condolences.