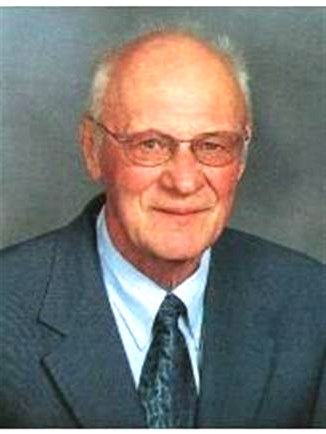 Richard Anton Rasmussen was born August 30, 1927, on the family farm in Hazelwood, Rice County, Minnesota, to Anton and Lillian (Brocker) Rasmussen. He was baptized and confirmed at Immanuel Lutheran Church in Hazelwood and attended country school. He had to quit school in the eighth grade to help on the farm, a decision he always regretted. After his education, Dick worked at Campbell Dairy, Castle Rock Gardens and hauled cattle to St. Paul for Al Lewandowski. On August 27, 1949, Dick married Betty Chambers at Immanuel Lutheran. After their marriage, Dick served in the U.S. Army until receiving his Honorable Discharge in September 24, 1951. When he returned, they lived and worked on the Rasmussen farm and Dick worked at Malt-O-Meal. In 1960, Dick and Betty sold their cattle and rented out their land. In 1973, they moved to town. Dick helped operate the local taxi company for a few years with his brother Gordon. He celebrated 40 years of employment with Malt-O-Meal in 1991. After his retirement, he worked for the Campbell family for seven years, caring for their homes and property in Edina and Minnetonka, where his great joy was driving their Buick to Palm Springs each fall and back in the Spring. One year it broke down and Mr. Campbell said to pick out a new one. Dick loved car shopping and was very happy to do that

Dick was a longtime member of St. Peter's Lutheran Church, the American Legion and the Eagles Club. He enjoyed gardening, growing roses, at one point had 67 rose plants, and driving around the grandchildren in his Model A Ford with the rumble seat. Dick also drove his 1966 Cadillac in the Jesse James parades, which he had bought from the Campbells. Dick was a kind, gentle person, who loved to spend time with his family, laugh, and have a good time. He will be dearly missed.

A service will be announced in the spring. Interment will be in Hazelwood Lutheran Cemetery, Webster Township, at a later date.

Published by Northfield News from Nov. 1 to Nov. 15, 2021.
To plant trees in memory, please visit the Sympathy Store.
MEMORIAL EVENTS
To offer your sympathy during this difficult time, you can now have memorial trees planted in a National Forest in memory of your loved one.
Funeral services provided by:
Benson & Langehough Funeral Home & Cremation
MAKE A DONATION
MEMORIES & CONDOLENCES
0 Entries
Be the first to post a memory or condolences.