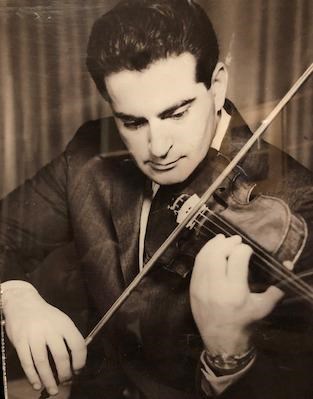 Tenafly - Arthur Leon Samuels, 93, of Tenafly, passed away peacefully in the arms of his loving wife Harriet of 55 years on Monday, August 3rd, 2020.

Arthur, a well known Bergen County Violinist and Musician, was born in New York on November 4th, 1926, the son of the late Irving and Hattie (Pellar) Samuels. Drafted into the United States Army in his senior year of high school during World War II, Arthur served in the 3rd Army, 15th Corp. As a musician in the Special Services division, he performed with USO shows throughout Europe. After the war, Arthur was accepted at The Julliard School of Music earning a diploma in Violin in 1951. He received a BS and an MA in Music Education from Columbia University Teachers College in 1954. Through a formal apprenticeship, he learned the art of violin making, and established a successful career in stringed instrument repairs and bow rehair. As a Luthier, he crafted 12 violins and 4 violas.

Arthur taught music in the NYC Public School System for over twenty years, becoming the Orchestra Director of Instrumental Music. While teaching he completed course work in piano tuning and repair. He established a large reputable business as a piano tuner in Bergen County, NJ, as a well as a highly sought after private instructor in violin. In addition, Arthur was the Concertmaster of the North Jersey Symphony Orchestra.

A multifaceted person; he published several short stories, enjoyed metal detecting, riding his motorcycle, photography, building model trains and airplanes. He was a long time member of Temple Emanu-El in Closter. He was also a member of the Tenafly Rifle & Pistol Club.

Arthur is survived by his wife Harriet, his adored daughters, Marcy Samuels Lippold and Hally Samuels Ulanday. Greatly admired by his sons-in-law, Timothy Lippold and Michael Ulanday. His rich musical legacy lives on in his granddaughter Ilana who plays on a violin made by her grandfather. He was preceded in death by his brother Martin, also a cellist. Donations in his memory can be made to The Julliard School, Multiple Sclerosis Society, and Jewish Charities of one's choice. May his memory be for a blessing.


To plant trees in memory, please visit our Sympathy Store.
Published by Northern Valley Sub South from Sep. 1 to Sep. 10, 2020.
MEMORIAL EVENTS
No memorial events are currently scheduled.
To offer your sympathy during this difficult time, you can now have memorial trees planted in a National Forest in memory of your loved one.
Funeral services provided by:
Gutterman and Musicant Jewish Funeral Directors
MEMORIES & CONDOLENCES
Sponsored by Gutterman and Musicant Jewish Funeral Directors.
0 Entries
Be the first to post a memory or condolences.