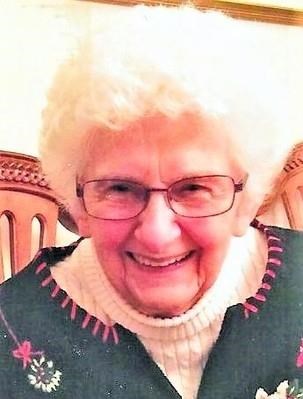 It is with great sadness that the family of Diane K. Haren announces her passing on April 8, 2020 at age 89.

Diane was born on March 9, 1931 to Mildred and George Lindsay in Auburn, Maine. She graduated from Edward Little High School in 1949 and from Bates College in 1953, where she majored in sociology. She moved to New York City after graduation and worked in Social Services. She met Martin, a handsome WW2 veteran, at an Officers Club in Queens and married him in 1954 after a whirlwind courtship. Diane and Martin lived in Montvale, NJ for most of their married life. They forged lifelong friendships on Madison Avenue. Diane was a good neighbor, quietly lending a hand to whomever needed it. She helped start the first Meals on Wheels program in the Pascack Valley. She enjoyed cooking, gardening and antiquing. She never drew attention to herself but was known for her sense of style and eye for color and design. She worked at the Woodcliff Lake Manor Nursing Home in administration from 1972 to 1978 and then worked alongside her husband Martin in his real estate business. She was an avid reader with a curious mind. She raised her daughters to be independent and instilled in them the belief they could succeed in anything to which they set their minds.

Diane moved to Sunrise Assisted Living in Woodcliff Lake, NJ a year after her husband's death. She enjoyed being part of that community. Her family is eternally grateful for the compassionate care she received there, especially at the end of life.

In lieu of flowers, donations to St. Jude or The Michael J. Fox Foundation for Parkinson's Research would be greatly appreciated.

A memorial mass and celebration of Diane's life will take place as soon as we are free to gather.


To plant trees in memory, please visit our Sympathy Store.
Published by The Record/Herald News from Apr. 10 to Apr. 12, 2020.
MEMORIAL EVENTS
No memorial events are currently scheduled.
To offer your sympathy during this difficult time, you can now have memorial trees planted in a National Forest in memory of your loved one.
Funeral services provided by:
Wyman-Fisher Funeral Home Inc. - Pearl River
MAKE A DONATION
Please consider a donation as requested by the family.
MEMORIES & CONDOLENCES
Sponsored by Wyman-Fisher Funeral Home Inc. - Pearl River.
5 Entries
Her daughter, Gretta, was a neighbor of mine when she lived in downtown Hillsdale. I met her mother a few times in the 1980s. She seemed pleasant but reserved. I was sorry to read of her passing but she is reunited with her husband.
Edward Roell
December 11, 2020
Many memories of laughter and long conversations, walks in the neighborhood and park. She touched my life for the better. Im so grateful and blessed I was able to know her.
Jennifer
Friend
April 13, 2020
Dee was a good friend, we went out together, enjoyed many good times. Shared and supported each other through tough times. In my life there was much pleasure in my friendship. Much sadness at her passing. Kay Stark.
April 11, 2020
Beautiful words for a beautiful person. My fondest memory is hanging with your mom waiting for you to come home from kindergarten. And the many times over the years we and the moms spent time together. My condolences.
April 11, 2020
My deepest condolences to the entire extended
Family. I will always remember Diane's kind heart,
Interest in others and exquisite taste - especially for antique furniture. May she Rest In Peace and her memory forever be a blessing to all who were fortunate enough to know her.
Andrea Tolchinsky
April 11, 2020
Showing 1 - 5 of 5 results