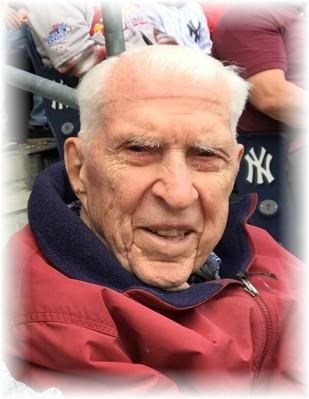 Ridgewood - Quentin William Wiest, formerly of Ridgewood and recently of Paramus, passed away peacefully on April 12, 2020 at the age of 107. Born in Philadelphia, Pa in 1912 he was a survivor of the Pandemic of 1918. After attending the original Northeast High School in Philadelphia, he was graduated from George Washington University with a Bachelor of Science in Engineering with a major in Physics. He was a member of three national honor fraternities - Tau Beta Pi (Engineering), Sigma Pi Sigma (Physics), and Phi Eta Sigma (Scholastics). From 1943 to 1975 he worked for the Western Electric Company, the manufacturing arm of the Bell Telephone System . His final position was as Vice-President of Administration which included responsibilities for negotiating Patent Licensing agreements with the world's leading telecommunications companies. He was a licensed professional engineer and a member of the Telephone Pioneers of America, a national charitable organization. Married to Myrtle Anne (nee Black) for over 56 years until her passing in 1997. They resided in Virginia, Texas, Wisconsin, Illinois, Westfield NJ, and in Ridgewood from 1965 until 2019 before finally moving to Paramus. An expert and life-long bridge player, he was mentioned, while in his 90's, in the New York Times bridge column by renowned columnist, Alan Truscott. He bowled (rolling a 200 game at the age of 90) and played golf beyond age 100. For several decades he was an active member of the Hobbyists Unlimited of Ridgewood. He was an active volunteer for the Red Cross and Christian Healthcare of Wyckoff. Pre-deceased by his siblings, he is survived by daughters Myrtle Anne Kassover and husband Jeff of Pompton Lakes, Paula Kay Wiest of Manhattan, and son Quentin Wiest II and wife Betty of Ridgewood. He is also survived by grandchildren Lynn Kassover of Pompton Lakes, Dana Kassover of Lincoln Park, Quentin Wiest III and wife Caroline of Manhattan, Whitney Beisler and husband Mark of Charleston, SC, and Julia Wiest and fiancée John Parke III of Breckenridge, CO and Howell, MI. He is also survived by great-grandchildren Alex Elizabeth Braden of Lincoln Park, Theodore Richards Wiest of Manhattan, and a player to be named later (sometime in August) of Charleston, SC. Burial was private at Christ the King Cemetery of Franklin Lakes with Reverend Monsignor Ronald J. Rozniak of Our Lady of Mount Carmel Church, Ridgewood presiding. Arrangements were entrusted to Feeney Funeral Home of Ridgewood. In lieu of flowers, the family requests donations in Quentin's name to your local food pantry.


Published by The Record/Herald News from Apr. 17 to Apr. 22, 2020.
To plant trees in memory, please visit the Sympathy Store.
MEMORIAL EVENTS
To offer your sympathy during this difficult time, you can now have memorial trees planted in a National Forest in memory of your loved one.
MAKE A DONATION
MEMORIES & CONDOLENCES
5 Entries
So Sorry for your loss. May you be comforted by the good memories. God bless you and your family Quentin.
Mark Butwinski
April 20, 2020
To Quentin and Family,
Very sorry for your loss. Your dad truly lived a long and full life. May your memories sustain you and may the good Lord give you strength and peace. God Bless.
Sincerely,
Paul Rizzo '68
Paul Rizzo
April 20, 2020
My mom , late Emma Schultz, played Bridge with Quentin as her partner, for many years.- Richard Schultz
April 19, 2020
Our thoughts and prayers go out to the Wiest family at this time of loss.
Vito Nardelli
April 19, 2020
Quentin Wiest 11 Family: Susan and Joe Rizzi express their condolences on the loss of your father (grandfather) whom we met only once at Quentin's and Betty's house in recent years, at a time when he was already over 100 and still very vibrant. You all have so much to be proud of in connection with his so many accomplishments and to be so thankful for having him as a part of your lives for such an incredibly long time. RIP Susan and Joe
joseph a. rizzi
April 18, 2020
Showing 1 - 5 of 5 results