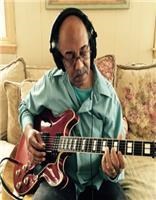 FUNERAL HOME
Caggiano Memorial
62 Grove St.
Montclair, NJ
Reggie Lucas, a guitarist, songwriter, producer, and longtime Montclair resident, died of complications resulting from heart disease on May 19, 2018 at NewYork-Presbyterian Hospital in Manhattan. The musician, who played with Miles Davis and helped to launch Madonna's career, was sixty-five. Lucas was born on February 25, 1953, in the Flushing neighborhood of Queens, New York. His father was a physician, and his mother, a teacher and administrator in the city's public schools. The young family lived with her parents, southerners who moved to New York during the Great Migration. Their deep love and generosity of spirit made a lasting impression on their grandson.Unusually talented and independent, Lucas dropped out of Bronx Science High School after the New York City teachers' strike of 1968 and pursued a career in music. By seventeen, he was on tour with the R&B singer Billy Paul. Two years later, he joined the electric band of jazz legend Miles Davis, appearing on albums like On the Corner, Agharta, Pangea, and Get Up With It, while performing everywhere from Baalbek, Lebanon to Sapporo, Japan.
After the band dissolved, Lucas formed a songwriting duo with Davis's drummer James Mtume, collaborating on such R&B hits as "The Closer I Get To You" (Roberta Flack and Donny Hathaway) and the Grammy-winning "I Never Knew Love Like This Before" (Stephanie Mills). His greatest success was Madonna's eponymous 1983 debut; Lucas produced the majority of the album and wrote "Borderline," her first top-ten hit.
Lucas also established an R&B group, Sunfire, recorded a solo jazz album, Survival Themes, in 1978, and founded the Jersey City recording studio Quantum Sound in 1986.
Though he never stopped making music and pursuing personal projects, Lucas prioritized family life after suffering a severe heart attack in 1991. He briefly taught the history of American pop at Montclair State University, and in his spare time enjoyed cooking, studying and collecting music, and building computer systems for his home studio. At the time of his death, he was working on a jazz opera based on The Black Russian, Vladimir Alexandrov's biography of the African-American expatriate and Moscow nightclub owner Frederick Bruce Thomas.
Lucas will be remembered as a loving husband, father, brother, and son, as well as a man of exceptional kindness and good humor. He is survived by his mother, Dr. Annie Wolinsky; his wife, Leslie; his brother, Gregory; a daughter, Lisa; and a son, Julian.
A memorial service will take place on Saturday, June 2, 2018, at Union Congregational Church in Montclair, NJ at 3:00PM. In lieu of flowers, please send memorial contributions to NewYork-Presbyterian Hospital at http://give.nyp.org/goto/reggielucas
Published by The Record/Herald News on Jun. 1, 2018.
To plant trees in memory, please visit the Sympathy Store.
MEMORIAL EVENTS
Jun
2
Memorial service
3:00p.m.
Union Congregational Church
Montclair, NJ
Funeral services provided by:
Caggiano Memorial
MAKE A DONATION
MEMORIES & CONDOLENCES
Sponsored by Caggiano Memorial.
1 Entry
Leslie, Lisa & Julian-
Our deepest sympathies! Such an incredibly hard time for all of you right now! Please know that Gerald & I are thinking of you & hoping that a lightness of spirit will be yours again soon. All our love, Jean & Gerald
Jean Gorman
Friend
June 1, 2018
Showing 1 - 1 of 1 results