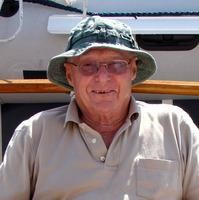 BORN
1919
DIED
2021
Robert W. Searles 1919 - 2021
Brooklyn - Robert Wallace Searles passed away on Monday morning, April 26, 2021, surrounded by his family. He was one hundred and one years old.
Born September 4, 1919, he grew up in Pomfret and resided in Brooklyn, for most of his life. Mr. Searles was a graduate of Williston Academy, class of 1938 and received a BS degree in Civil Engineering from Worcester Polytech Institute in 1942. He served in the U.S. Navy as a Lieutenant J.G. during WWII and he was a serving member of the Mystic Flotilla Coast Guard Auxiliary for over 55 years. Active as a patrol coxswain early on, Bob was also an instructor, teaching boating safety classes for many years. He was honored in 2019 by the Auxiliary District Commodore celebrating his many years of service.
He founded and operated Searles Ready Mix Concrete in Wauregan, until retiring in 1983. Bob was an avid boater and boat builder. He spent every summer cruising Long Island Sound with Audrey, his wife of 56 years. Bob was predeceased by Audrey in 2007.
He leaves a son, John Searles with wife Lynne and grandson Jonathan; daughter, Janet Gill with husband Jeremiah; and daughter, Judith Baker with husband Ralph, grandson, Robert Baker, granddaughter, Megina Baker with husband Johannes Mark, and great-grandchildren, Tova and Carl Mark. He lived a very long and active life.
In lieu of flowers, donations in Bob's memory may be made to The Coast Guard Foundation at coastguardfoundation.org.
A private memorial service for family members will be held at a later date.
tillinghastfh.com
To plant trees in memory, please visit our Sympathy Store.
Published by Norwich Bulletin from Apr. 27 to May 2, 2021.
MEMORIAL EVENTS
No memorial events are currently scheduled.
To offer your sympathy during this difficult time, you can now have memorial trees planted in a National Forest in memory of your loved one.
MEMORIES & CONDOLENCES
5 Entries
Janet, you and your family are in my thoughts and prayers. My condolences.
Beverly Molnar Mazzarella
Friend
May 6, 2021
John, Very sorry to you and your family for the loss your farther. What a long and rich life. A true credit to our northeastern CT community.

I am so sorry for your loss. My thoughts and prayers are with you. He was such a wonderful man. Heaven has gained an angel.