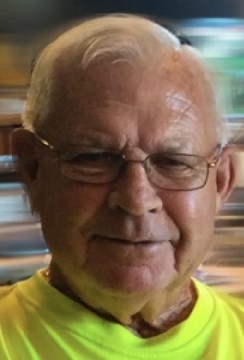 BORN
August 29, 1934
DIED
May 4, 2021
FUNERAL HOME
Carpenter Memorial Chapel - North Platte
1616 West B Street
North Platte, NE 69101
Leonard W. "Hoot" Gibson, 86, of North Platte, passed away on May 4, 2021, in Omaha. He was born on Aug. 29, 1934, to Lester and Blanche (Radel) Gibson in Wallace, where he grew up. He entered the United States Army on Jan. 30, 1957, and was honorably discharged on Jan. 12, 1960. Leonard was united in marriage to Marlene Schnitzer on April 16, 1957, in Grant. The couple lived in North Platte and to this union three children were born. He worked for the Union Pacific Railroad for over 40 years as a clerk. Leonard was a member of First United Methodist Church and the Eagles Club. He was preceded in death by his parents; mother and father-in-law, Mark and Ruth Schnitzer; grandmother-in-law, Ona McCray; sister and brother-in-law, Leonabelle and Neal Erickson; infant brother, Lester Clayton; brother and sister-in-law, Martin and Ina Gibson; infant grandson, Michael; and infant granddaughter, Victoria. Leonard is survived by his wife, Marlene; sons and their wives, Douglas and Diane Gibson and Brent and Angila Gibson; daughter and her husband, Staci and Ronald Moritz; grandchildren, Emilee Gibson, Marcus Gibson, Elizabeth "Liz" Moritz, Allison (Jeff) White, Erinn (Christian) Moritz, Treu (Cory) Gibson and Brooke (Ryan) McQuillin; step-grandchildren, Andrew (Amanda) Nelsen, Chad Nelsen and Joanna (Josh) Schearer; soon-to-be-great-grandson, baby White; 10 great-step-grandchildren; sister-in-law, Marceil (Dave) Hillyer; and numerous nieces and nephews. Memorials are suggested to the First United Methodist Church or the St. Patrick's Activities Association. Online condolences may be shared at carpentermemorial.com. Funeral service will be at 11:30 a.m. Monday, May 10, at the First United Methodist Church with the Rev. Dr. Douglas Delp officiating. Burial will follow at Fort McPherson National Cemetery, near Maxwell, with full military honors provided by the United States Army and the North Platte Veterans Honor Guard. The family requests casual attire and bright colors. The service will be livestreamed via the Carpenter Memorial Chapel Facebook page. Visitation and book signing will be from 3 to 7 p.m. Sunday, May 9, at Carpenter Memorial Chapel, which is entrusted with arrangements.
To plant trees in memory, please visit our Sympathy Store.
Published by North Platte Telegraph from May 6 to May 7, 2021.
MEMORIAL EVENTS
May
9
Visitation
3:00p.m. - 7:00p.m.
Carpenter Memorial Chapel - North Platte
1616 West B Street, North Platte, NE 69101
May
10
Funeral service
11:30a.m.
The First United Methodist Church
Funeral services provided by:
Carpenter Memorial Chapel - North Platte
MEMORIES & CONDOLENCES
Sponsored by Carpenter Memorial Chapel - North Platte.
10 Entries
So sorry to hear of Hoot's passing. He was a great person who will certainly be missed. Prayers to all of his family during this difficult time.
Bob Morrison
May 18, 2021
I was lucky to live by the Gibsons and they did come any better than Leonard.I always looked forward to seeing the family at the airport when I was still working Heavens gain our loss.All of you are in our prayers.
Kevin Coker
May 11, 2021
Thinking of your family during this time of loss of your husband, father and grandfather. May the many wonderful memories you have, bring you peace, comfort and joy in the days ahead. Thoughts and prayers for everyone.
Karen and Tim O'Connor
Friend
May 9, 2021
Staci ,Ron and family. I'm so sorry for your loss. He was always so kind and as a teenager I was welcomed in his home anytime night or day EVERYDAY ! I mean I was I was there everyday for years. Puts a smile on my face. Love you all always and forever.
Julie Sprague
May 9, 2021
Marlane and family,
We were so sad to hear of Leonard’s passing. Leonard was a bright spot on our February Tropic Breeze holidays in Florida. He would be at the gate waiting to assist with luggage etc. Our arrivals won’t be the same.
Leonard could always be counted on to keep us entertained with his fun with Dan and the other people at the condo. When you saw that twinkle in his eye you knew he was up to something. Never a dull moment with Leonard on the scene.
I envy your family having had Leonard as a husband, father, grandfather and great grandfather. He was a wonderful man. He will be missed.
Kevin and Lynn McGillivray
Ontario.
Kevin and Lynn McGillivray
Friend
May 8, 2021
Stacy,Ron & family
Sorry to read that your dad has passed.
Such a wonderful man and always such a kind person. My sincere condolences
Patricia Garza
May 7, 2021
Dear Marleen, and family. Please know you all are in our prayers and we are thinking of you at this time. I will always remember Leonard with a smile on his face and a twinkle in his eye. He was the joy of so many of our family get together`s. Remember he is watching after you and is not in any pain.
Debbie Van Alstine and Families
May 6, 2021
Leonard was the best grandpa to my girls I wish the family peace
Teresa Belsky
May 6, 2021
We are so saddened by Leo's passing. When we would see him and Marlene out and about he would always be wearing a smile and happy to visit with us, especially on Saturday night if Jody had a candy for him. He will be dearly missed, our thoughts and prayers are with Marlene and the rest of the family at this difficult time.
Don & Jody Isabell
May 6, 2021
Marlene & Family, So very saddened to hear of Leonard´s passing. Leonard was always so happy-go-lucky when I would see him at Saturday Night Worship. I will miss his sense of humor and I pray you feel God´s love and kindness during this most difficult time. You are on our thoughts and prayers and may He give you the peace that only He can give during this time of loss.
Robin & Kent Brown
May 6, 2021