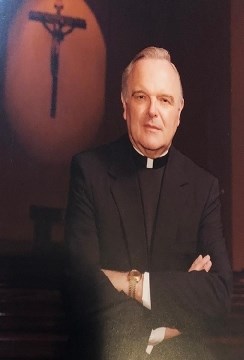 BORN
January 11, 1930
DIED
May 1, 2021
FUNERAL HOME
Adams & Swanson Funeral Home - North Platte
421 W. 4th St.
North Platte, NE 69101
The Rev. Robert Francis Chamberlain, 91, of North Platte, completed his earthly journey on May 1, 2021, at Linden Court. Father Chamberlain was born January 11, 1930, to Robert Chester and Margaret Frances (Schrader) Chamberlain in Sutherland. His schooling began in Lincoln County District 96, Sutherland Elementary, for grades one through eight, and he graduated from St. Patrick High School in 1947. His studies for the priesthood were at the Pontifical College Josephinum in Columbus, Ohio. On May 25, 1957, Father Chamberlain was ordained a Priest by Archbishop Amleto G. Cicognani D.D., Apostolic Delegate to the United States in St. Turibius Chapel, Pontifical College Josephinum in Worthington, Ohio. Ordained for ministry in the Diocese of Grand Island, his life and ministry included: associate pastor at St. Patrick's in Sidney; pastor of the Catholic parishes in Bayard-Minatare, Mitchell-Morrill, Shelton, Wood River, St. James in Kearney, Greeley-Scotia, St. Mary's Cathedral in Grand Island and Crawford-Harrison. He was also involved with the Diocesan Migrant Program, the Diocesan Religious Formation Program and the Marriage Tribunal. He retired from pastoral assignments on July 1, 1995, but continued helping in parishes whenever and wherever needed. Father Chamberlain was preceded in death by his parents, Margaret in 1935 and Robert in 1963. He is survived by his brother, John of Sutherland; nephews, Dan (Donna) Chamberlain of Foxfield, Colorado, Randy Chamberlain of Omaha and Steve Chamberlain of North Platte. Father Chamberlain requested no flowers, but memorials are suggested to the Grand Island Diocese. Online condolences may be shared at adamsswanson.com. Mass of Christian burial will be at 10 a.m. Friday, May 7, at Holy Spirit Catholic Church in North Platte with Bishop Joseph Hanefeldt as celebrant and the Rev. Vidya Sagar and the Rev. Robert Karnish as concelebrants. Burial will follow at the Riverview Cemetery in Sutherland. Visitation will be from 9 a.m. to 4 p.m. Thursday, May 6, at Adams & Swanson Funeral Home. Rosary will be at 7 p.m. Thursday, May 6, at Sacred Heart Catholic Church, Sutherland. The service will be livestreamed on the Adams & Swanson Facebook page for those unable to attend. Adams & Swanson Funeral Home is in charge of arrangements.
To plant trees in memory, please visit our Sympathy Store.
Published by North Platte Telegraph from May 2 to May 4, 2021.
MEMORIAL EVENTS
May
6
Visitation
9:00a.m. - 4:00p.m.
Adams & Swanson Funeral Home - North Platte
421 W. 4th St., North Platte, NE 69101
May
6
Rosary
7:00p.m.
Sacred Heart Catholic Church
, Sutherland, Nebraska
May
7
Mass of Christian Burial
10:00a.m.
Holy Spirit Catholic Church
, North Platte, Nebraska
Funeral services provided by:
Adams & Swanson Funeral Home - North Platte
MEMORIES & CONDOLENCES
Sponsored by Adams & Swanson Funeral Home - North Platte.
2 Entries
The seminarians, faculty, staff, and administration of the Pontifical College Josephinum, Columbus, Ohio, send their love, prayers, and deepest sympathies to Father Chamberlain’s brother priests, his family, and his former parishioners during this time of loss. “Réquiem æternam dona ei, dómine. Et lux perpétua lúceat ei. Requiescat in Pace. Amen. Eternal rest grant unto him, O Lord, and let perpetual light shine upon him. May he Rest In Peace. Amen. ”
Pontifical College Josephinum
May 6, 2021
During my time in NoPlatte, I recall having the honor to help Fr. Chamberlain at Mass, driving him to Kearney for his dentist apts and giving him Communion over the years. He was a gentle man and a great priest who always had time to listen and visit. May he now RIP and live with the Good Lord in Heaven. My sympathy to all his family.
Jim Schaefer
May 4, 2021