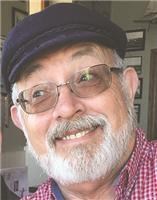 BORN
1951
DIED
2021
FUNERAL HOME
Maddox Funeral Home
105 West Main Street
Front Royal, VA
David Edward Butler died peacefully in his sleep on Wednesday, November 10, 2021. Dave was born on April 22, 1951, to Edward Butler and Maxine Radabaugh in Lima, Ohio. He talked fondly of his school years with the Sisters of St. Ursula. The Sisters encouraged Dave to become a Priest, but instead he enlisted in the United States Navy where he served honorably for 10 years and attained the rank of Electronics Technician E-6. During this time, he married Diane Donathan and they adopted a son, Brian Butler. Brian was a bright spot in Dave's life, giving him so much to be proud of. Dave provided for his family by working in the Telecommunications Business. In 2004 he remarried Jean Butler and gained a daughter, Amy, and a son, Ryan.

Dave was a kind, decent, loving humble man who loved spending time with his family, especially his grandchildren, traveling and having a bit of Irish now and then. He was so much more than words could ever say.

There will be a private Celebration of Dave's Life on Saturday, November 13, 2021. In lieu of flowers, please donate to Front Royal C-Cap (Congregational Community Action Project).