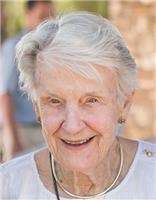 Pat was born October 17, 1926, in Baltimore, Maryland, the first of two children of the late Gladys Adelaide Hamill Teale and Edward Painter Teale. She was a member of the Class of 1943 of Thomas Jefferson High School in Richmond, Virginia and attended Harcum Junior College in Bryn Mawr, Pennsylvania. After college, she worked in a division office of AT&T Long Lines in Washington, DC, where she met her future husband Warren Ballinger French, Jr.

Pat's greatest pride was her family. She married Warren on September 17, 1949 in Silver Spring, Maryland. In the fall of 2019, they celebrated their 70th year of marriage. They were the parents of four children. Pat was predeceased by her son Warren Ballinger French, III, who passed away April 19, 1981. In addition to her husband, she is survived by her three remaining children and their spouses: Anne Elizabeth French Dalke and Jeffrey Alan Dalke of Philadelphia and Edinburg; Cynthia Ellen French Mullen and Wesley Grigg Mullen, Jr. of Rockbridge Baths; and Christopher Edward French and Rhonda Harris French of Woodstock. Pat is also survived by her grandchildren and their spouses: Lena French Dalke and Sameer Gupta of Brooklyn; Lillian Stover Dalke and Angelina Lim of Brooklyn; Samuel Shaffer Dalke and Katharine Baratz Dalke of Harrisburg; Marian Ballinger Dalke and Elizabeth Nadia Pisarczyk of Philadelphia; Wesley Grigg Mullen, III and Accacia Max Mullen of Rockbridge Baths; Andrew French Mullen and Melissa Ann Falkenstern of Albuquerque; Rebecca Blythe French of Harrisonburg; Warren Ballinger French, II of Woodstock; and Stuart Teale French and Tiffany Marie French of Harrisonburg. Five great grandchildren also survive her: Naima Belle Dalke Gupta, Mahalia Vati Dalke Gupta, Andy Bo Tian Dalke-Lim, Julia Baratz Dalke, and Audrey French Dalke. She is also survived by her brother Robert "Bob" Edward Teale and his wife Carol Rogers Teale of Lincoln, Nebraska; her sisters-in-law Doris French, Emma Randel, Marian French, Ellen Fuller, Joyce French and Sally Weber; and her brother-in-law John Weber, and many, many nieces and nephews.

In addition to being a daughter, sister, wife, mother, grandmother, and great grandmother, Pat was an active supporter of her church and an advocate for her local community. She became a member of the Woodstock United Methodist Church in 1954, later served as a member of its Board of Trustees and the Administrative Council, and was active in the church's Tape Ministry, Food Pantry, and Clothes Closet. She was a member of the Shenandoah Garden Club, where she served as corresponding secretary.
Pat's love of children and reading led to her involvement in and support of libraries at the town, county, and state levels. She served on the Board of the Woodstock Library and was appointed by Virginia Governors Godwin and Dalton for five-year terms on the State Library Board of the Virginia State Library, serving as chairman for one year. Pat also worked to gain support of the Shenandoah County Supervisors for the creation of the Shenandoah County Library, which opened in 1985 and led to the creation of the Shenandoah County Library System. She served two terms on that board. Pat was also involved in the founding of the Shenandoah Community Foundation in 1999.

As well as being an avid reader, Pat was a world traveler, having enjoyed trips to six of the seven continents, only missing Antarctica. She most cherished her travels with her daughters and her annual "Girls Getaway" weekends with all the "girls" in the family to celebrate her birthdays. She also enjoyed playing bridge with friends and was a member of The Tennis Forever Gang, playing tennis into her 80's as long as there were younger players who could retrieve the tennis balls.

Pat's love also extended to her in-laws and many nieces, nephews, great nieces and great nephews. She started many family traditions: making handcrafted Christmas stockings for these family members, hosting Christmas Eve dinners for the whole French family, and a wedding brunch for each of her nieces who were married in the local area.

There will be a private graveside service for family, with interment at Massanutten Cemetery, Woodstock. Pallbearers will be Pat's grandchildren and their spouses. A public memorial service will be conducted Sunday, January 19, 2020 at 3:00 p.m. at Woodstock United Methodist Church with Pastor Robert N. Hoskins, Jr. officiating. Immediately following the memorial service, there will be a reception at French Brothers Cabin, Woodstock.

The family would like to thank the many, many loving caregivers who attended to Pat during the final weeks of her life.
Pat requested there be no online condolences. In lieu of flowers, memorial donations may be made in her name to the Shenandoah County Library Foundation (designated for children's books), 514 Stoney Creek Blvd, Edinburg, VA 22824; the Shenandoah Community Foundation, PO Box 31, Woodstock, VA 22664; or Woodstock United Methodist Church, 154 South Muhlenberg Street, Woodstock, VA 22664.

Arrangements are in the care of Heishman Funeral Home, Inc., Valley Funeral Service Branch in Edinburg, Virginia.
Published by Northern Virginia Daily on Jan. 13, 2020.
To plant trees in memory, please visit the Sympathy Store.
MEMORIAL EVENTS
Jan
19
Memorial Gathering
French Brothers Cabin
Woodstock, VA
Jan
19
Memorial service
3:00p.m.
Woodstock United Methodist Church
VA
Funeral services provided by:
Heishman Funeral Home Inc., Valley Funeral Service Branch - Edinburg
MAKE A DONATION
MEMORIES & CONDOLENCES
4 Entries
Beautiful memories of a beautiful woman who helped shape my childhood. My deepest sympathies to the entire family.
Jennifer Hopkins Matthews
January 16, 2020
Faithful prayer warrior and really sweet lady Pat. I look forward to seeing you again when we all get home.
kathleen Reynolds
January 15, 2020
I extend my dearest condolences on the loss of your loved one. She was always kind to me when I would see her and Mr. French out and about at the local eateries. God bless you all during this time of healing.
Kenny Stroop
January 15, 2020
I was honored to have been one of Pat's nurse's in her final days. She was a very sweet & classy lady & was loved by so many. My only regret is that I didn't meet her sooner in life & get to know the wonderful person everyone else knew her to be. Thank you Anne, Chris, & Cindy for allowing me the privilege of taking care of your mother in her final days. My sincere thoughts & prayers are with you all during this difficult time. Blessings!
Amy Hamman
January 12, 2020
Showing 1 - 4 of 4 results