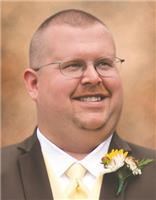 Funeral services are scheduled for 10:00 AM, Wednesday, May 26, at Harvest Fellowship for Thomas Wade Frazier of Artesia, New Mexico.

Visitation will be at Terpening & Son Mortuary from 4pm - 8 pm.

Thomas was born April 30, 1979 in Woodstock, Virginia to Thomas Edward Frazier and Lea Ann Darr Frazier. He was married to Allison Kulinski on September 1, 2012 in Shenandoah National Park on the Skyline Drive. They came to Artesia in February 2016 from Strasburg, Virginia where he was a Sheriff's Deputy for Shenandoah County.

Tom began his career in Fire Services in May of 1994 with the Strasburg Fire Department as a volunteer firefighter. He served as a volunteer firefighter there until February of 2016. While volunteering his time in Strasburg, he got a job from April of 2003 to May of 2004 with FEMA-MT Weather EOC in Berryville, VA as a paid firefighter. Tom then began his law enforcement career in May of 2004, following in his father's footsteps. His love for public service lead him to receive numerous trainings pertaining to law enforcement that enabled him to wear many hats during his career. In 2004, he began his career with the Shenandoah County Sheriff's Department, in Woodstock, Virginia. He left SCSO in February of 2016 when his family moved across the country to New Mexico. He began his work at the Artesia Police Department as a Patrol Officer. During his time in patrol he achieved the rank of Corporal. He then transferred to the Criminal Investigations Division as a Detective and also became a Task Force Officer for the Alcohol Tobacco and Firearms (ATF) federal agency. He also participated in numerous special assignments for the department.

Tom enjoyed spending time with his beloved wife and children especially doing activities outdoors such as fishing and going up to the mountains. He loved reading and learning new things and never made decisions without researching it thoroughly. He loved worshiping at his church and building connections with all people. He was quick-witted and extremely funny once you got to know him.

Survivors include his wife Allison of the family home; parents Thomas and Lea Frazier of Front Royal, Virginia; daughter Camryn Marie Frazier of Artesia; sons Thomas Caden Frazier and Carter Wade Frazier of Artesia; a sister Jessie Ives and husband Jeff of Front Royal; and grandmother Anna Catherine Rupert of Woodstock, Virginia.
Published by Northern Virginia Daily on May 26, 2021.
To plant trees in memory, please visit the Sympathy Store.
MEMORIAL EVENTS
May
25
Visitation
4:00p.m. - 8:00p.m.
Terpening & Son Chapel
611 W. Grand Avenue, Artesia, NM
May
26
Funeral service
10:00a.m.
Harvest Fellowship
2307 W. Main Street, Artesia, NM
Funeral services provided by:
Terpening & Son Mortuary
MAKE A DONATION
MEMORIES & CONDOLENCES
6 Entries
Tom and Lea,
So sorry to hear about the loss of your son. I’m sure he was a very good person like the both of you. Please let me know if there is anything I can help with.
Your friend,
David White
David White
Friend
May 29, 2021
Tom, you will be missed by all who knew you. I am glad that I got to know you and your Dad, and call you my friend. May God Bless your wife and children and Family in time of sorrow.
Todd pence
Friend
May 28, 2021
May God bless you and your family in this time of sorrow.
Mike and Patty Painter
Friend
May 27, 2021
My deepest sympathies to the family. So very sorry for your loss. Tom was an amazing person and he will be truly missed.
Heath Darr
Friend
May 27, 2021
Tom was more like a brother than a cousin. The years go by while family is apart but the love never leaves. All we can try to do is live up to the legacy that you have left for us and try to be as kind, caring, and considerate of others that you were. Rest easy Brother, we will see you again one day.
Dail Ritenour
Family
May 26, 2021
I'm so very sorry for your loss. Praying you find comfort in this time of grief. God bless.
Suzy Daley
Acquaintance
May 26, 2021
Showing 1 - 6 of 6 results