Cliff was born Oct. 11, 1926 in Columbus, Ga. He attended Auburn High School where he was named on the All Southern Grid Squad. He played football for Auburn University in 1944 then enlisted in the US Army in 1945. He returned to the Auburn football team in 1947 and graduated in 1950.

He lived most of his life in Alabama where he coached high school football for 40 years. His career included Warrior High School in Warrior, Ala.; Randolph School in Huntsville, Ala. and Donoho School in Anniston, Ala. He retired in 1989 and moved to Mary Esther where he worked in the Okaloosa County School System until 1997 when he retired again.

He is survived by his loving wife of 22 years, Ilene Jackson Grubbs; four children, Nancy Noblitt and husband, Jackie, of Huntsville, Ala., Bill Grubbs and wife, Barbara, of Spanish Fork, Utah, Elaine Hedden and husband, Charles, of Guntersville, Ala. and Lee Grubbs of Mesa, Ariz.; three stepchildren, Patrick Moon of Crestview, Jason Moon of New York, N.Y. and Alexis Moon Simpson of Crestview; and 11 great-grandchildren.

Memorial contributions may be made to Covent Hospice, 101 Hart Street, Niceville, FL 32578 in memory of Coach Grubbs.
The family will announce plans for a Memorial Service at a later date.

Arrangements are entrusted to Davis-Watkins Funeral Home. To share memories, express condolences and sign the guestbook, please visit www.daviswatkins.com
Published by Northwest Florida Daily News on Nov. 28, 2011.
To plant trees in memory, please visit our Sympathy Store.
MEMORIAL EVENTS
To offer your sympathy during this difficult time, you can now have memorial trees planted in a National Forest in memory of your loved one.
MAKE A DONATION
MEMORIES & CONDOLENCES
13 Entries
MICHAEL TAYLOR
December 6, 2011
http://www.cranksmytractor.com/2011/11/finding-the-end-zone.html

Great Story About Coach...
Brian Bence
December 1, 2011
Tough but fair...may have saved my life! No joke. In drivers' ed, a girl pulled in front of a Peterbilt, realized she shouldn't have done so, and rather than keep the Ford Granada moving, she hit the brakes! Coach put his foot onto the accelerator from the passenger seat and we were unscathed. I'll miss you Coach Grubbs.
Ben Hunter
December 1, 2011
Coach Grubbs, you will be missed. I remember you fondly from The Donoho School years. You were always so nice, patient and funny with everyone. I never knew your story and I'm so proud to have known you. Sad to know you are gone. Keeping you and family in my prayers. Fred is right. You were awesome! Rest in peace, With Love, Rob and Gloria
Rob & Gloria Babb
December 1, 2011
Jerolyn and I were just remembering you fondly together...thanks for your role in our lives (and teaching Jerolyn how to drive!). Coach...you where wise and practical...and best of all...straightforward! My best memory is your straight up strategy for football---we'll run at them up the middle until the stop us...then we'll run around the end until they stop us...then we'll pass at them until they stop us...and do it again! 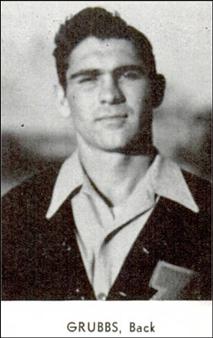 We will all miss you Coach, but we won't forget you.
Brent Heard
November 28, 2011
Celebrating a life well lived. We will cherish the memories forever.
Mary Beth Mayes
November 28, 2011
Showing 1 - 13 of 13 results