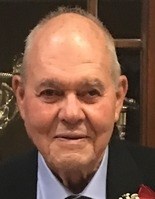 Destin - Joseph W. Thrasher, age 82, a lifelong resident of Destin, Florida, passed away peacefully at his home on July 16, 2021. He gained his Heavenly wings after an illness, during which time a great devotion was shown to him by his children and family, church family and lifelong friends.

He was born on July 28, 1938 and graduated from Choctawhatchee High School in 1956. He started his career as a lineman with Gulf Power Electric Company as one of the only high climbers employed. Later, he made a career move over to Centel Telephone Company as a lineman where he retired at the age of 62. After retirement, he continued to stay busy helping family build docks locally, fishing, crabbing, hunting, going on numerous adventures with his grandchildren and later in life caring for his wife's every need.

A lifelong believer in Jesus, Joe faithfully worshipped and served at Saint Andrews by-the-Sea Episcopal Church and Immanuel Anglican Church where he was a Sunday Usher and Greeter.

He is preceded in death by his parents, James Wellington Thrasher and Mary Juanita Thrasher; his loving wife of 57 years, Janet Jewelene Thrasher; his sister-in-law, Joyce Melvin Fogle; his brother-in-law and sister in-law, James and Catherine Ward, and his nephew, James "Jamie" Ward.

Joe shared a life that most can only dream of with the love of his life, Janet Jewelene Thrasher. He was a hard worker instilling his work ethic in his children and grandchildren. He was an avid water-skier, a rescue scuba diver, a great outdoorsman, hunting and fishing every chance possible, and he was an amazing craftsman building anything he put his mind to. He was much loved and admired and will be greatly missed. The impact he made on the lives of his family and all of those who were fortunate enough to be touched by his life will never be forgotten.

Our family would like to extend our sincerest appreciation to Susie Thrasher Rutherford, John Marshall Jr., and Randa Fowler for their endless love and support. They were all at his side assisting him daily during his courageous battle with cancer. Their compassion is deeply appreciated and will never be forgotten. We would also like to thank our family, Jolie Thrasher and Debra Brumfield, his church family, and his neighbors for always watching over him.

The celebration of life will be held at Immanuel Anglican Church, located at 250 Indian Bayou Trail, Destin, Florida on Wednesday, July 21, 2021, at 11am. The family will receive friends starting at 10:30am just prior to the service. There will be a reception immediately following the committal service at 514 First Avenue, Destin, FL.


Published by Northwest Florida Daily News from Jul. 19 to Jul. 20, 2021.
To plant trees in memory, please visit the Sympathy Store.
MEMORIAL EVENTS
Jul
21
Visitation
10:30a.m.
Immanuel Anglican Church
250 Indian Bayou Trail, Destin, FL
Jul
21
Celebration of Life
11:00a.m.
Immanuel Anglican Church
250 Indian Bayou Trail, Destin, FL
Funeral services provided by:
Davis-Watkins Funeral Homes & Crematory
MAKE A DONATION
MEMORIES & CONDOLENCES
Sponsored by Davis-Watkins Funeral Homes & Crematory.
4 Entries
So sad to see that Joe has passed. My regrets that we did not see this until today and was not aware that he was ill. Our family has many fond memories of Joe scuba diving and fishing with my dad Dr. Bobby Fountain & their team of merry adventurers including Rudy Simpler, George Jolly, Red Beard, Dr. AB Galloway, Dr. Al Fulford, and Alvin Ray. Joe and Jewelene were just treasures to us...and I rercall so may times eating and hanging out at Jewel Melvin's with them in Destin. Its comforting to know Joe is up in heaven with Dad now.....It must be full of prime diving rocks! All our love for you children and grand children from Momma Madge Fountain, Graham & Felicia Fountain, and Phillip and Molly Fountain.
Commissioner Graham W. Fountain
Friend
August 5, 2021
Joe and Jewelene were great people and good neighbors. I miss them both dearly. May God bless you and your family in this time of sorrow.
Kristen Goodman
Friend
July 20, 2021
So sad to hear this news. My family lived next to his families home in the 50's. Joe was an awesome waterskier and the heart throb of all of the little girls in the neighborhood. My heart goes out to Susie, Eddie, and the rest of his family.
Ann (Moultrie) Jackson
Family
July 20, 2021
So sad that Joe is gone. Will miss him on the ladder in his yard. Joe was probably the best man that I ever knew. I never heard him say a harsh word. He was my friend.
Tommy mikel
Friend
July 20, 2021
Showing 1 - 4 of 4 results