He was a member of the Church of Holy Apostles of McHenry.

A local hypnotherapist for almost 30 years, he originally started out as a naprapath and had formerly owned the Comedy College in Rosemont.

He was preceded in death by his father; and two brothers, Patrick and Michael McManus.

Interment will be in the church cemetery.

For information, call Colonial Funeral Home at 815-385-0063.
Published by Northwest Herald on Oct. 18, 2009.
To plant trees in memory, please visit the Sympathy Store.
MEMORIAL EVENTS
To offer your sympathy during this difficult time, you can now have memorial trees planted in a National Forest in memory of your loved one.
MAKE A DONATION
MEMORIES & CONDOLENCES
16 Entries
Dear Sue and Girls,
Please accept our heartfelt sympathy on Larry's passing. We will miss him. He was a unique character. He was an important part of our youth and he helped to make the Newman club fun. We have so many wonderful memories of the times we spent with him. We were honored to inculded in your 30th anniversay celebration. The world will never be the same with out him.

Love & Prayers to the family of such a nice man,husband & Father. I knew him back in the 70's when he was full of energy, information & optimism. Since I moved away in the 80's to Mi. & Cal. I only saw him once but he was still a very nice guy. You will be missed. God Bless his family.
Karen Brown
October 27, 2009
Dear Sue and Family: I want to tell you how sorry Phil and I for your loss. We pray for God's peace and help for you. Please contact me if I can do anything for you.
Judy and Phil Mcbride
Judy & Phil McBride
October 23, 2009
To Larry, who lived every everyday like it was important. A man who spent the time to be with people, to talk to them about important concepts and who lived an extraordinary life. Thank you so much. You made a difference for so many people. You are a hero.
Patricia Sinnott
October 21, 2009
God Bless you Larry. You are the best friend a person could ask for. You modeled Christ for me and my family.

Kevin Sinnott
Kevin Sinnott
October 21, 2009
Our deepest condolences to Susan and her children. We will keep you and Larry in our prayers. May he rest in peace.
God Bless,
Joe & Joyce
Joe & Joyce Creasey
October 20, 2009
We were so sorry to hear ab out Larrys passing,he will always be one of the most interesting characters I have ever known,I miss him already,I remember standing up to your wedding & some of the people mistaking me for Larry & giving me gifts.I'll never forget him. Much love to you & your family. Bill Maxwell & family
Bill Maxwell
October 20, 2009
We were saddened to hear about Larry. I go back to the Neuman Club. I remember him always having a lot of fire in him! Our prayers are with his family.
Susan Anderson
October 20, 2009
We were saddened to hear about the death of Larry. He always brought a smile to our home when he visited. Our condolences to the Mcanus family, to Mary, Theresa, Emilie and Ellen, but especially to Susan, who was by his side during the whole struggle. We will miss him.
Carol & Rick Rikoski (Westbrook)
October 19, 2009 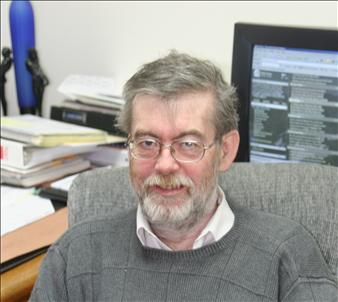 Dear McManus Family: Words are very hard to find to express the sadness I am feeling about Larry's passing. He was one of the most caring and down to earth gentleman I have ever had the pleasure to know.
He always took the time out for me and my family and I will never forget his kindness and generosity! You will always be in my heart and mind Larry...
Craig Sinnott
October 19, 2009
All my memories of Larry include a smile. God Bless you John, Jim, and Mrs. McManus and may Larry rest in peace.
Rachel Gregersen
October 19, 2009
Peace and prayers to the McManus family. Larry's calls to WKRS were always thought-provoking and usually made me smile. He will be missed!
Kelly BeLow
October 18, 2009
To the entire McManus family:
I will miss Larry so much. He was a unique and very intelligent person. He was taken from us too quickly. He was one of the WKRS callers and WLIP, that I loved to listen, as he played the devil's advocate on any subject. Behave up there my good friend Larry!
A big debate is going on in heaven, with Larry in the center. Rest in peace, and I will miss you.

Judi-Judi-Judi, or as Larry called me, Judi cubed.
Judith Grace
October 18, 2009
McManus Family I feel so sorry about Uncle Larry I hope everything will be better with you soon

I am so sorry to hear about Larry. He was a good friend over the last 40 years. We could always count on him to make us laugh and forget our troubles. My prayers are with you.

Love always,
Linda Hanrahan
October 18, 2009
God Bless Larry and Rest in Peace. My thoughts and prayers are with you and the family Susan.
Darlene Springer
October 18, 2009
Showing 1 - 16 of 16 results