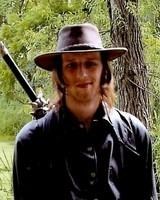 BORN
1989
DIED
2021
FUNERAL HOME
Marengo-Union Funeral Home
505 East Grant Highway
Marengo, IL 60152
Nicholas Andersen
Born: January 4, 1989 in Barrington, IL
Died: May 1, 2021 in Marengo, IL
He was born Nicholas James Andersen, on January 4th, 1989, and would come to be known as: "Ninja Nick" also known as "Viking" - by family and friends in later years. His hobbies included gaming, making weapons aka "the sticks", playing with his lightsabers, drawing, reading and singing karaoke. Nick was an old soul who had a love for mythology and of the Viking culture. Nick lived somewhat of a nomadic lifestyle as did those he was nicknamed after. He was strong, caring, and stubborn. He had a generous heart - and was treasured by his peers.
Although his life was never simple, and he had many hurdles and obstacles presented to him, Viking never gave up! His stubborn streak was a two edged sword that cut both ways.
Nick Andersen is survived by his parents, James (Jim) and Kimberly (Kim) Andersen, his brother Matthew James Andersen, his five-month-old son Damion Andersen and Godmother, Debbie Feirn, and many many more friends and family.
Nicholas passed away during a house fire at his parents' home, at approximately 4 a.m. on May 1st of this year, 2021.
The losses for the family include not only their beloved Son/ brother/ father but also the family's beloved pets. Including their dogs Peanut (Their Hero) and Rex. Cats Katie, Cola and Freddie along with several other loved fur babies.
There will be a gathering from 4 to 8pm on Friday, May 14 at Marengo-Union Funeral Home, 505 E. Grant Hwy. Marengo. Due to current guidelines there is a maximum of 50 people in the funeral home at one time and masks are required.
There will be an additional Viking memorial service held the following day. Please check Facebook for the most recent information about time and location.
"Farewell, Viking...
See you in Valhalla, my brother."
Online condolences may be made at www.marengo-unionfuneralhome.com.

To plant trees in memory, please visit our Sympathy Store.
Published by Northwest Herald from May 7 to May 8, 2021.
MEMORIAL EVENTS
May
14
Memorial Gathering
4:00p.m. - 8:00p.m.
Marengo-Union Funeral Home
505 East Grant Highway, Marengo, IL 60152
Funeral services provided by:
Marengo-Union Funeral Home
MEMORIES & CONDOLENCES
Sponsored by Marengo-Union Funeral Home.
2 Entries
Kin and Jim. I was deeply saddened to hear about Nick. You are all in my prayers. Sorry I couldn't make the service. Hope you get a new house quickly and get back to semi-normal soon. Rick Goins.
RICK GOINS
May 14, 2021
Our prayers go out to you and the family.. I had said to Marty I am sure this is Jim and Kim"s son. May all the great memories you shared help you thru this difficult time.. God's Blessing to you all..
Marshall & Melody Brown
May 8, 2021