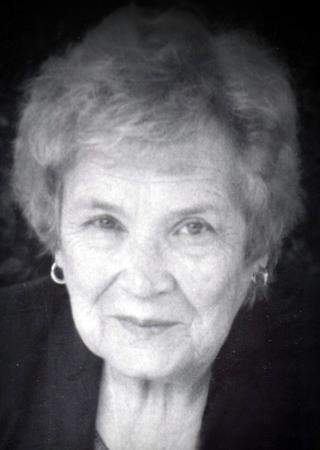 MERRILLVILLE, IN - Margilee Reinhart, age 91, of Merrillville, IN passed peacefully at home on Wednesday, March 3, 2021.

Margilee was born in Princeton, Indiana on March 25, 1929. She was a graduate of Princeton High School and Indiana University in Bloomington, where she was a member of the Alpha Gamma Delta Sorority, and received a degree in Library Sciences.

In 1951, she married her high school sweetheart and the two moved to Merrillville in 1954 when Jerry took a teaching position at Merrillville High School. For the next 50 years, they both served the Merrillville community with their talents.

Margilee served on a variety of clubs and committees over the years, including the Suburban Federated Woman's Club where she participated for over 20 years. She was an arts chairman at the state level and a cub scouts leader. A talented pianist, she accompanied the Liedercranz Choir, taught private lessons, and spent 20 years teaching music at Aquinis Elementary School.

Most notably, Margilee, alongside her husband Jerry, founded Ross Summer Music Theatre in 1964 and produced musical theatre productions for the next 50 years. They introduced thousands of kids and adults to the magic of the theatre, welcoming anyone who wanted to participate. Year after year, hundreds, young and old, spent their summers on the stage of Reinhart Auditorium working on stage crew, playing in the orchestra, or dancing and singing. Margilee's attention to detail when it came to costuming was legendary and she made her mark on each and every production.

In the early 1980's, so many kids wanted to be in RSMT shows (especially very young kids) that there simply wasn't enough room for them on stage. Margilee created Ross Summer Youth Theatre to accommodate the overflow and the little ones, creating a rousing new musical experience for kids of all ages for the next ten years.

She was preceded in death by her beloved husband of 63 years, Jerry; and her parents: Reuben and Thelma McRoberts.

Due to COVID-19, restrictions in the Funeral Home include: social distancing at 6-feet and face masks are required.

To plant trees in memory, please visit our Sympathy Store.
Published by The Times on Mar. 5, 2021.
MEMORIAL EVENTS
Mar
7
Visitation
3:00p.m. - 7:00p.m.
Geisen Funeral Homes - Merrillville
7905 Broadway, Merrillville, IN 46410
Mar
8
Funeral service
10:00a.m.
St. Joan of Arc Catholic Church
, Merrillville, Indiana
Funeral services provided by:
Geisen Funeral Homes - Merrillville
GUEST BOOK
Sponsored by The Times.
10 Entries
So sorry to hear of your Mom´s passing. She was truly a great lady. Will always remember all the great times on Deerpath Rd. Both your Mom and Dad were the best
Dennis Burt
March 10, 2021
The memories are many since we have been in and enjoyed many of the productions at Ross Summer Music Theartre. Our sympathies to the Reinhart Family your parents; both taught us so much.
Florence, Mary Ellen, Debbie, Alexander Magallon
March 8, 2021
Margilee and Jerry were fiercely compassionate mentors to my brother Jamie and thousands of young artists - she was instrumental in reserving the Reinhart Auditorium in September 1997 for a solo piano recital in honor of my parents´ wedding anniversary - she made it possible for me to return and share my program with my family and the community - a gift beyond measure - let´s all pass on this wonderful spirit - love you and miss you madly, Margilee - Stephen
Stephen Sulich
March 8, 2021
My parents rented a small home on Deerpath Rd. to Margilee and Jerry when they first came to Merrillville. They were such a wonderful family. Our sympathy to all of you.
Twila (Birk) Sier
March 7, 2021
As I fondly remember both Jerry and Margilee and the entire family I pray that they will be conformed in knowing they are together forever in heaven. They both were 2nd parents to me and my family. As I am sure they are to the entire RSMT family. There are far too many memories of their love, kindness, caring and mentor ship to list . They will forever remain in my thoughts and heart.
Michael Hamang
March 6, 2021
To have raised such a beautiful loving family is a true testament to the woman. Margilee, may you Rest In Peace
Reba Stone
March 5, 2021
From all of the Jascoviak and Halpin members prayers and loving thoughts. No words convey our sorrow. We grieve with our huge Adopted Reinhart families. Missing Margilee but take comfort knowing she is with Jerry now. Love to you all.
Holly Jascoviak
March 5, 2021
Margilee was a wonderful loving talented individual who obviously loved children. We were neighbors for over 60 years and she was a wonderful friend with my mother. Rest In Peace you will be missed Barb,Terri,Tim ,Kathy
Terri Pierce
March 5, 2021

May you be comforted knowing that there are thousands of caring thoughts, all over the country, recalling the memories of happy times with your family.
Nancy (Clarke) Hoy
March 5, 2021
Mrs. Reinhart was a second "mother" to thousands of children and young adults. My family will never forget all the fun we had over the years with Mr. and Mrs. Reinhart and all the kids. Our love and deepest sympathies to the family.
Bridget (Hamang) Gates
March 5, 2021