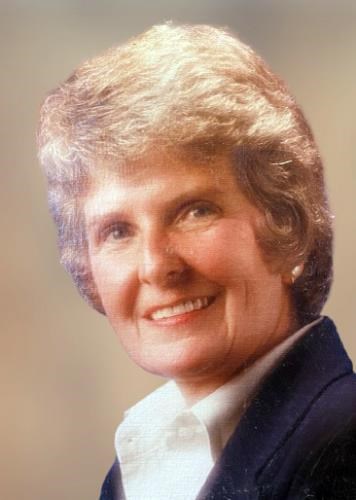 VALPARAISO, IN - Mary Lou Evans, 90, of Valparaiso, joined her Heavenly Father on April 29, 2021 from her home in Valparaiso, IN. Mary Lou was born in Logansport, IN, December 27, 1930 to Glenn and Margaret Miller, attended Logansport High School, where she was a cheerleader and Homecoming Queen, taught dance at the Teen Canteen, loved riding her Tennessee walking horse, and dearly loved her sister, Patricia (Miller) Lukemeyer. She attended DePauw University, majoring in Liberal Arts, and joined Kappa Kappa Gamma. She completed college at Purdue University, majoring in Education. Mary Lou became a Purdue cheerleader and was elected to the Yearbook Queen's Court. During summer, she was a counselor at the Plymouth, IN Children's Camp (for kids with disabilities).

Soon after graduation in 1954, she married Lt. Daniel R. Evans in a military wedding, at San Antonio Presbyterian Church, and they moved to Fort Bliss, El Paso, TX. She helped put her husband Dan through medical school, then his residency in Indianapolis teaching health and physical education, and coaching cheerleaders at Avon High School. She worked on her master's degree at night, while raising their first two boys. Mary Lou, Dan and family settled in Valparaiso, where their third son was born. She was an ardent golfer, Valparaiso Country Club Champion in 1973, and runner up many times. She scored three Holes in One, became the first woman Republican precinct committee person in Porter County, was a member of Tri Kappa and the First Presbyterian Church of Valparaiso.

Mary Lou and their son, Matt accompanied Dan on a medical missionary trip to India where she volunteered at the hospital, tutored Matt through fifth grade studies, and went on "Eye Camps" to villages where Dan performed surgery on thousands of patients. She was a very neat and particular homemaker, an exemplary model for her children and grandchildren. She cared for others, and showed unbelievable strength, courage, and resilience despite several health challenges later in life, while remaining a beautiful lady.

A memorial service will be held in the coming month with family and close friends, Chaplain Rick Greene attending. In lieu of flowers, please consider memorials in honor of Mary Lou Evans to ORBIS International, dedicated to saving sight worldwide ([email protected]).

To plant trees in memory, please visit our Sympathy Store.
Published by The Times on May 9, 2021.
MEMORIAL EVENTS
No memorial events are currently scheduled.
To offer your sympathy during this difficult time, you can now have memorial trees planted in a National Forest in memory of your loved one.
Funeral services provided by:
Moeller Funeral Home
MAKE A DONATION
MEMORIES & CONDOLENCES
Sponsored by The Times.
0 Entries
Be the first to post a memory or condolences.