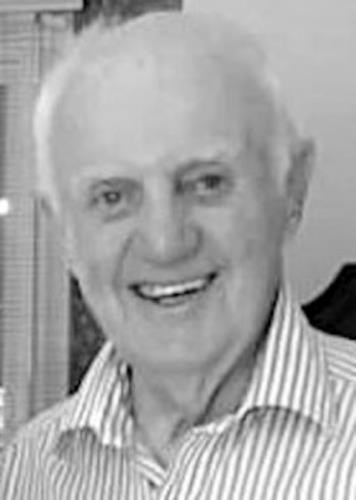 He was preceded in death by his parents Arnold and Margaret (nee McQuade) and his sisters: Pat Dyer and Betty Dietrich.

Richard was a proud veteran of World War II, serving as a signalman for the U.S. Navy during the invasion of Normandy and in the Pacific theater, where he survived a torpedo attack.

He and Ella married on August 10, 1952, and shortly thereafter he became a general agent for Allstate Insurance, where he worked for many years. After retirement, he became a beloved substitute teacher at Hobart High School, where he was known as Mr. G. and sometimes entertained his classes with the poetry of Robert Service. He was a skier, sailor, card shark, Bears fan, and general adventurer who was not afraid to take risks. His family and friends salute a long life well lived.

Memorial services for the family will be held privately. www.reesfuneralhomes.com

To plant trees in memory, please visit our Sympathy Store.
Published by The Times on May 14, 2021.
MEMORIAL EVENTS
No memorial events are currently scheduled.
To offer your sympathy during this difficult time, you can now have memorial trees planted in a National Forest in memory of your loved one.
Funeral services provided by:
Rees Funeral Home, Hobart Chapel - Hobart
MAKE A DONATION
MEMORIES & CONDOLENCES
Sponsored by The Times.
6 Entries
Dear Ella, I have many cherished memories but the one that comes to mind now is Dick and his "parlor" games. The most famous being the horse race! I was saddened to learn of his passing and may the Lord bless and keep you, wrapped in His arms of love and comfort. Pat
Patricia J Jabo
May 18, 2021
A great man who certainly did live a long accomplished life. Mr. G put a smile on the faces of everyone who surrounded him. I have many fond memories of him in the classroom. We were lucky to have known him. He will be missed by so many. Rest In Peace, Mr. G.
Michael Elkmann
Student
May 17, 2021
It was such a pleasure to know and work with Richard. I was saddened to learn of his passing, and had many great memories come flooding back. My prayers for Ella and the family. May he rest in peace.
Yvette Sutherland (School City of Hobart)
May 17, 2021
Your smile always put a smile on my face. Everyone has been lucky to know you.
Shelby
Student
May 16, 2021
There are very few teachers and professors that you'll remember in your life. Mr. Gilbertson was one of those that I've always remembered.
Nick
Student
May 14, 2021
Ella, My heartfelt prayers and thoughts are with you
Maryanne Battistini
May 14, 2021