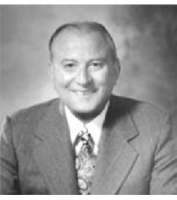 PETERS--Anthony J. The former Chairman and Chief Executive Officer of Cushman & Wakefield, Inc., a real estate firm based in Manhattan, died on October 7, in Ft. Myers, FL. He was 94 and lived in Ft. Myers, FL. He was born in Portsmouth, NH, in 1916, one of seven children of Italian immigrants. The family moved to Brooklyn in 1921, and he attended James Madison High School. His older brother, Leone, had joined C&W in 1929, and Tony dropped out of high school to join him in 1933, becoming an office boy. During World War II, he spent three years in the Army Air Corps. He returned to C&W after the war and remained with the firm for more than 50 years. He and his brothers, Leone and Vincent, owned the majority of C&W until 1970, when they sold the firm to the RCA. He became President in 1971 and Chairman of the Board in 1976. The three brothers were the driving force of C&W after World War II, and they transformed the firm from a family-owned building management concern into the nation's leading, full-service real estate organization. The brothers were involved in many large and complex real estate transaction in Manhattan and throughout the U.S. Tony was the most active broker in Lower Manhattan's financial district throughout the 1950's, 1960's, and 1970's, and one of the most successful real estate brokers anywhere in the world. In the 1950's, when just about everyone was writing off Wall Street as dead, Tony convinced the New York Stock Exchange to lease land at 20 Broad Street to a developer who constructed the first office building in Lower Manhattan since the Great Depression. In 1959, he won the Real Estate Board of New York' "most ingenious deal" award for the transaction. He won the award again, in 1960, for a transaction involving 60 Broad Street. The success of 20 Broad Street broke the ice for the surge of construction in the financial district that followed, convincing Chase Manhattan Bank in 1960 to resist the trend of other banks moving uptown and build it's 60-story headquarters in the heart of the financial district. In 1967, Peters represented financial institutions in Lower Manhattan in leasing 3.3 million square feet in a single year -- a record still not broken -- including two of the largest leasing deals ever made in Manhattan. At the time, those two leases were easily the highest dollar commitments ever made by a business for office space in Manhattan. Tony's tremendous success in the financial district earned him the nickname "Mr. Downtown." Tony was instrumental in expanding C&W nationally and he played a role in developing more than 50-million square feet of office space in the U.S., including Chicago's Sears Tower, San Francisco's Bank of America Center, and New York's 9 West 57th Street. He was the owner of Interlaken Inn and the Woodland Restaurant and the developer of Interlaken Estates in Lakeville, CT, and, after retirement, he developed "The Carlton" in Boca Raton, FL, "The Pierre" in Longboat Key, FL, and "Lion's Head" in Salisbury, CT. Tony was a gregarious lover of life, the New York Yankees, travel to Ireland and Italy, crossword puzzles, cooking and baking. He was an inveterate shopper and a lover of gizmos, electronic gadgets and new cars. He was long active in many community and charitable causes, including the Board of Education of Glen Cove, New York; the Board of Regents of Marymount International Schools; the Board of Governors of the Marymount School in New York City; the Cardinal Cooke Guild; Cardinal Cooke's Committee of the Laity in New York City; the Cardinal Cooke Advisory Committee and he was always active in parish activities, wherever he lived. He is survived by his loving wife, Irene Peters; eight children and spouses: John Peters and Julia Belkin, Robert Peters, Carol Peters, Elizabeth Peters Mastopietro, Kathy Peters and Stuart Berman, Patricia and John Cavanagh, Anthony J. Peters, Jr., and Mary Ann and Vincent Giffuni; one brother, Vincent J. Peters; eight grandchildren: Carly Berman, Jeffrey Cavanagh, Matthew Giffuni, Max Peters, Romi Peters, Sara Joseph, Sascha Peters and Sharon Cavanagh, and four great-grandchildren: Emily, Greta, Preston and Wade. He is predeceased by his first wife, Mary V. Peters; his second wife, Marie Kelly Peters; and his grandson, Brian Cavanagh. In lieu of flowers, the family would appreciate contributions to The Cardinal Cooke Guild, 1011 First Avenue, New York, NY 10022 or to a charity of your choice. A service at Gate of Heaven Cemetery, Hawthorne, NY, will be announced at a later date.

Published by New York Times on Oct. 10, 2010.
To plant trees in memory, please visit the Sympathy Store.
MEMORIAL EVENTS
To offer your sympathy during this difficult time, you can now have memorial trees planted in a National Forest in memory of your loved one.
MAKE A DONATION
MEMORIES & CONDOLENCES
1 Entry
Douglas Nicholson
October 8, 2010
Showing 1 - 1 of 1 results