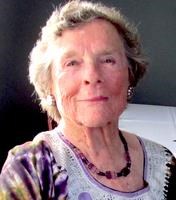 1926 - 2019
Barbara Beye Lorie passed away on May 6, 2019 at her home at Blue Heron Farm in Chatham County, NC. Barbara was a strong and independent woman with a great belief in justice and community. She is survived by her beloved sons, Douglas Beye Lorie, and his wife, Yvonne Trostli, and Anthony Beye Lorie and his partner Rodriguez Garner, as well as her sister Jane Boyd, brother Charles Beye and her many nieces and nephews. Barbara had a wide and deep circle of friends who were also her family. Her open heart and mind made her home a gathering place for friends and activists from near and far, and from around the world.

Barbara was born in Iowa City Iowa on March 7, 1926 to Dr. Howard Lombard Beye and Ruth Ketcham Beye. She was one of six children, with siblings Helen, Cyrus, Jane, Charles, and Ruth (Pinky). Barbara graduated from Monticello Preparatory School then attended the University of Iowa. She moved to NYC and then Palm Beach, where she married Douglas Lorie, a purveyor of fine antiques. After their divorce, she moved to Chapel Hill NC in 1958 with her sons, and completed an undergraduate degree in Secondary English Education and a Master's in Teaching from the University of North Carolina. She taught high school English at Chapel Hill High School, helping students face the challenges of de-segregation, and speaking out against racism. She later taught at Pinecrest H.S. in Southern Pines, and then at Ardsley High School in New York, where she also taught media criticism. She challenged and inspired many students, and took pleasure in keeping up with them through the years. She traveled around the United States, as part of the National Assessment of Educational Progress, a federally funded study of high school students' understanding of democracy. Adventure always called to Barbara, and she took her young sons on camping and car trips across the US and Europe, and later traveled extensively throughout the world, including trips to Russia, India, Africa, New Zealand and Australia.

She retired to Pittsboro, NC and became a leading voice in political, environmental and community issues. She helped create recycling centers in Chatham County; took part in battles against development, and urged greater water protections. She was a member of the Alston Chapel Church and a life long advocate for civil rights, never forgetting the segregation and Jim Crow laws she saw in her youth. Her anti-racism work was recognized with the Z. Smith Reynolds Foundation Nancy Susan Reynolds Award. She worked with friends for many years to create a co-housing community, and they founded the Blue Heron Farm Intentional Community. She lived there until the end of her life, mentoring many people – young and old - about living sustainably. In lieu of flowers, memorial donations may be sent to Alston Chapel Church, 1832 Alston Chapel Rd Pittsboro NC 27312 or the Haw River Assembly, P.O. Box 187 Bynum NC 27228 www.hawriver.org
To plant trees in memory, please visit our Sympathy Store.
Published by New York Times from May 16 to May 17, 2019.
MEMORIAL EVENTS
No memorial events are currently scheduled.
To offer your sympathy during this difficult time, you can now have memorial trees planted in a National Forest in memory of your loved one.
MEMORIES & CONDOLENCES
Sponsored by Her loving family and friends.
1 Entry
Our sincere condolences to the family of Barbara,may gods loving kindness give comfort and peace .1Cor1:3,4
May 16, 2019
Showing 1 - 1 of 1 results