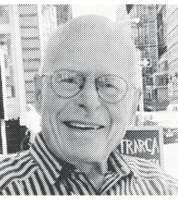 93, died Sunday morning, May 13, of natural causes in his home surrounded by his daughters, grandchildren and wife of 69 years, Sylvia. Ben was the beloved husband of celebrity cake designer, Sylvia Weinstock. Ben was born in New York City, an Army Veteran of World War II, and after graduating from NYU Law School in 1952 he was a lawyer in Massapequa for many years. When Sylvia was 50, she was diagnosed with breast cancer, and survived. It was then Ben left his practice in 1980 and the couple became pioneers in TriBeCa and founded the internationally-renowned Sylvia Weinstock Cakes together, in New York City. They traveled the US, and the world, with her magnificent confections. Ben created novel techniques in the structure and design of cakes. But even more beautiful than Sylvia's designs, was this couples' amazing love story. Sylvia and Ben's marriage is an inspiration to all who know them. The couple would have celebrated their 70th wedding anniversary this February. Benjamin was a kind and gentle soul and will be missed by all. There will be no memorial at this time, but donations in Ben's name can be made to Doctors Without Borders.

Published by New York Times on May 16, 2018.
To plant trees in memory, please visit the Sympathy Store.
MEMORIAL EVENTS
To offer your sympathy during this difficult time, you can now have memorial trees planted in a National Forest in memory of your loved one.
MAKE A DONATION
Please consider a donation as requested by the family.
MEMORIES & CONDOLENCES
3 Entries
Ben's smile and joyous personality, were a beacon of
of the love he felt for life and Sylvia.
Mitchell Mart
May 17, 2018
A light for Ben and his everlasting memory
Pamela Barnett
May 17, 2018
In loving memory of Benjamin Weinstock
Alison Berger
May 17, 2018
Showing 1 - 3 of 3 results