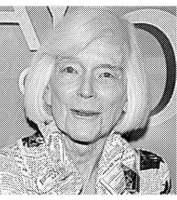 Writer and radio and television producer, died February 12, 2016, of natural causes in her beloved Manhattan brownstone. She was 87, born in 1928, in Morristown NJ. She was predeceased by her father, William R. Pfizer, Vice President of The Panama Line, and her mother, Isabel Morin Pfizer. Beryl grew up in Mt. Lakes, NJ, graduating from Mt. Lakes High School in 1945 and from Hood College in 1949, with a BA in music. She always wanted to live in the city, and moved to Manhattan after college to begin a long and varied career in the radio and television industries. She worked for the Arthur Godfrey Show on CBS-TV, wrote for NBC TV's The Home Show and worked with Dave Garroway on NBC TV's The Today Show, where she was a "Today Girl" feature panelist (1960-61). She received three Emmy Award nominations (1980-82), and won an Emmy in 1980, for producing "Ask NBC News, with John Chancellor." She wrote for NBC TV's broadcasts of The Macy's Thanksgiving Parade (1987-89), for NBC's MONITOR Radio, and for Edwin Newman; imagine the challenge of writing for the author of "Strictly Speaking!" She worked for NBC News at many Democratic National Conventions, including 1968 in Chicago. She produced "The Women's Program" series for the NBC Radio Network, which received a commendation from American Women in Radio and Television in 1979. Beryl also wrote and produced NBC-TV's "The All- New Pink Panther Show" (1971-74), which featured those famous cartoons and live-action segments with The Ritts Puppets and comedian Lenny Schultz reading letters and jokes from viewers. She produced medical and health stories for the NBC flagship TV station in New York City. She was the author of "Poor Woman's Almanac", humorous and pithy quips published in Ladies Home Journal. She received the Distinguished Alumni Award from Hood College, where she sponsored scholarships in writing and theater arts. Beryl was also an avid athlete and enjoyed playing tennis. She took up running and unexpectedly won prizes in the upper age groups of Jersey Shore 5 K's for many years, which tickled her to no end. She was proud to have completed a New York City marathon, and she loved the Midnight Run on New Year's Eve in Central Park, running her last race just last month. Beryl was generous, quietly helping many people. Terence Cardinal Cooke Healthcare Center awarded her the Mary P. Clark award for exceptional care and volunteer work for the Huntington's Disease unit of the hospital. She is survived by her sister, Joan Pfizer Sussmann, her four nieces and nephews, and five grand nieces and grand nephews. The family will hold a private memorial. In lieu of flowers, please honor Beryl by donating to your favorite charity.

Published by New York Times on Feb. 21, 2016.
To plant trees in memory, please visit the Sympathy Store.
MEMORIAL EVENTS
To offer your sympathy during this difficult time, you can now have memorial trees planted in a National Forest in memory of your loved one.
MAKE A DONATION
Please consider a donation as requested by the family.
MEMORIES & CONDOLENCES
7 Entries
Maybe it was an urban legend , but many of us who worked with Beryl assumed she was connected to the pharmaceutical company. Therefore the impeccable suits, perfect diction and confident yet never arrogant demeanor. So now on the eve of getting the 2nd Pfizer vaccine, how can I not think of Beryl. She flashed into my mind for sure when I got the first. To paraphrase what someone once said to me about Gabe Pressman, who also died several years ago, 'I'd pay good money to know what Beryl would think of this whole mishegas.". It would be enlightening for sure.
Inara de Leon
Coworker
February 15, 2021
As her neighbor, I will miss seeing her care for her townhouse and our occasional chats. She had wonderful energy.
Lois Surmacewicz
February 26, 2016
I worked with Beryl at NBC News. She was warm, witty, wonderful and wise. A great lady.
Roberta Spring
February 24, 2016
Beryl set an extrodinary example for all of us to follow. I will miss her.
Sally Kruse
February 23, 2016
Dear Jeff & family,

I am sorry to learn of BT's passing. I remember meeting her a couple times and she was a very accomplished woman.

Julie
Julie Tarr
February 22, 2016
She will be missed.
katy grohens
February 21, 2016
There should be a better word than 'classy' to describe Beryl. She was dignified, firm in her opinions and always treated people with grace and respect no matter where they (or she) happened to be on the totem pole. She was no pushover, and always stood up for what she believed was right in journalism and behaviour. So glad her life was so full right to the end.
Inara de Leon
February 21, 2016
Showing 1 - 7 of 7 results