Billie Kallick Press
PRESS--Billie Kallick, died February 12, 2009, in Washington, DC, of heart failure after a long illness. An educator, Billie Press was an early post-Sputnik visitor to the USSR, accompanying her husband, geophysicist Frank Press (later science adviser to President Jimmy Carter and President of the National Academy of Sciences) during International Geophysical Year 1957-8 to Moscow when such visits were still quite rare. Returning home to Pasadena, CA, she argued successfully for one of the first "Gifted Child" programs that became a part of the public response to Sputnik. She founded and directed such a program in the Pasadena City Schools 1962-65, which involved training 250 teachers. At the same time that Sputnik was galvanizing a broad response in the US, universal education in the Soviet Union under Khrushchev had been cut from 10 years to 8, with only 10% going on to higher education. Billie appreciated the irony of this, publishing an article quoting her interview with a high Soviet official, "It is bad policy to educate so many people beyond the stations they will occupy in life." Of course Billie didn't agree with this one bit! Obtaining her doctorate in 1968, she went on to found the HomeBased Early Childhood Education program in the Cambridge, MA, public schools, a kind of "each one teach one" in which economically disadvantaged mothers themselves became trained and employed as home visitors to other disadvantaged families, bringing books and educational materials into the homes of toddlers. She later taught at Salem State College and Lesley College, and was, in Washington, DC, a specialist in HEW's Bureau of Elementary and Secondary Education (1978-79). Born October 15, 1925, in St. Louis, MO, Billie grew up in Brooklyn, NY, the daughter of New York Times compositor and proofreader William Kallick and Mary Enders Kallick. Attending Samuel J. Tilden High School, she qualified for a full scholarship to NYU, where she graduated in 1946, marrying Frank Press (her highschool sweetheart) the same month. She is survived by her husband, her children William Press of Austin, TX, and Paula Press of Chapel Hill, NC, 2 grandchildren and 2 greatgrandchildren.
Published by New York Times on Mar. 1, 2009.
To plant trees in memory, please visit the Sympathy Store.
MEMORIAL EVENTS
To offer your sympathy during this difficult time, you can now have memorial trees planted in a National Forest in memory of your loved one.
MAKE A DONATION
MEMORIES & CONDOLENCES
Sponsored by Bill and Paula Press.
13 Entries
I have loved you Billie since first we met. My deepest sympathy to Frank, Bill and Paula.
Harry Ludas
January 1, 2014
Mrs. Press was my third grade teacher at Audubon Elementary School. In 1957 or 8 she went to Cape Canaveral with her husband a renown geophysicist and brought back this sand dollar. She broke it into pieces in front of us, and inside were revealed small, white inner shell parts that looked like doves. I think that was one of the first times I felt nature could do magic. She was a wonderful teacher. She had a tremendous impact on me and taught us to assimilate as well as to be very special at least in her eyes. I brought my autograph book to school for her to sign, and the wrote, "To Joey, my little kangaroo." Under her tutelage, I think I excelled in almost everything. I think of her smile often. She seemed to enjoy life tremendously. I'm sorry I didn't try to contact her before she passed as I am a teacher now. I'm sure I could have used her guidance. My best to your family. A loss like this must be extremely difficult. My Best, Joanne Hayakawa
p.s. I remember Kit Ross well.
May 28, 2012
Mrs. Press was my third grade teacher at Audubon Elementary in Altadena, Ca. I have thought of her so many times through the years. I remember her quietly sitting by me outside on many occasions, her presence a great comfort to a very shy child.I also remember her saying to me, "Kit, take the good with you in life, leave the rest." She encouraged me to become a teacher, and I am. What a wonderful woman! Thank you. Kit Ross
Kit Ross
April 21, 2010
My deepest sympathy to Frank, Paula and Bill. Billie was and continues to be an inspiration to me.

Debby Simmons
July 19, 2009
I was so sorry to hear about Billie's passing. I worked with her in Cambridge many years ago and she truly was someone that once you met her you could never forget her. My sympathies are with her family.
Dotty Covalucci
April 12, 2009
Billie was my hero, my mentor, my friend. The world has lost a lively, brilliant, dedicated, fun, inspiring, unique and lovely human being. I just learned of her passing. I am so sad. My deepest sympathy to family and friends.
Ellen Grant Valade
April 11, 2009
Billie was a bright light in our presence, candid, full of smiles and quips. She truly made the world a better place.
Theresa Rosenberg
April 2, 2009
I believe my husband Joel first mentioned the "gigantic hole in the universe" left by your passing. I keep returning to this image as there seems to be no other way to describe the loss of your uniqueness, your brilliance, and quite simply, your larger-than-life-ness. There will never be another one like you. Love forever from Sara, and family: Joel, Delano and Clara
Sara Press
March 2, 2009
I will miss forever your generosity of spirit, your sharing in our joys and troubles, the wisdom of your counsel, the stimulation of your intellect, and the richness of your laugh.
Margaret Press
March 2, 2009
I miss you Nanny, you were truly magnificent.
Laura Press
March 1, 2009
I miss you -- my brilliant, funny, life-loving wife and partner for 64 years. Frank
Frank Press
March 1, 2009
No mother, or teacher, was ever like you. Your children, and all those around you, were lifelong beneficiaries.
Bill Press
March 1, 2009 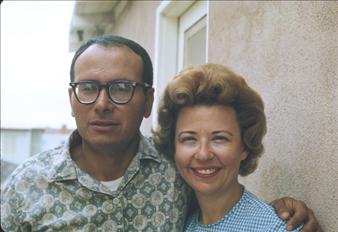