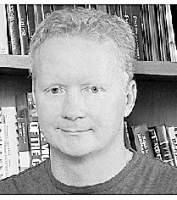 BARBAS--Carlos F. (1964 2014) Carlos F. Barbas III, the Janet and Keith Kellogg II Chair professor and member of The Skaggs Institute for Chemical Biology at The Scripps Research Institute (TSRI), died June 24 after a battle with a rare form of medullary thyroid cancer. He was 49. Barbas, who grew up in St. Petersburg, Florida, double-majored in physics and chemistry while graduating with honors at Eckerd College. He earned a PhD in 1989 and conducted postdoctoral studies at Pennsylvania State University and at The Scripps Research Institute, La Jolla. He joined the TSRI faculty in 1991, where he conducted studies focused on the development of new therapeutic approaches to human diseases through studies at the interface of synthetic organic chemistry, molecular biology and medicine. Some of his accomplishments include developing the first human antibody phage libraries, creating the first synthetic antibodies, developing the first artificial transcription factors capable of regulating endogenous genes, and pioneering chemically programmed antibodies. Each of these approaches has resulted in a new drug class that is currently in clinical trials or approved for the treatment of a variety of diseases. To translate his research into new therapies, Barbas founded three companies. In 1997, he co-founded Prolifaron, which was acquired by Alexion. In 2002, he started Cov-X, which was acquired by Pfizer. In 2008, he founded Zynegenia to develop the next generation of antibody-derived drugs. Barbas received national and international recognition for his work. He was the recipient of the Investigator Award from the Cancer Research Institute, the Presidential Green Chemistry Challenge Award, Arthur C. Cope Scholar Award from the American Chemical Society, a National Institutes of Health (NIH) Director's Pioneer Award and the Tetrahedron Young Investigator Award in Bioorganic and Medicinal Chemistry. He was named a scholar of The American Foundation for AIDS Research and a fellow of the American Associate for the Advancement of Science. In 2014, Barbas was named a fellow of the Academy of Microbiology. He was author on more than 330 scientific articles and was a named inventor on 58 issued U.S. patents. In a 2009 profile <http://www.eckerd.edu/news/ index.php?f=detail&id=2956> for his alma mater, Eckerd College, Barbas reflected on his decision to become a researcher: "It's better than I envisioned. I didn't realize when I was studying science all the other opportunities it gives you to see the world. I have a very interesting kind of job that includes traveling the world to give talks. Things that I've worked on are being tested on people, and at some point, there will probably be someone in my family or someone I know who benefits directly." In another interview [http://www.scripps.edu/newsandviews/e_20080114/covx.html], he said, "It has been a dream of mine to develop drugs that make a difference." "I extend my deepest condolences to Carlos's family," said Michael Marletta, president and CEO of TSRI. "He was a creative scientist who tackled broad-ranging and important biomedical questions to lay the foundation for new therapies. He was admired and loved by his many friends on our campus. We will miss him greatly." Carlos loved to tell jokes, to prank his friends, host legendary parties, race fast cars, go to the gym and, most of all, to spend time with his family. Memorial Service will be held in La Jolla, CA. Barbas is survived by his wife, Annica; children, Derek, Sabrina, Sixten and Viggo; mother Joanna, sister, Maureen and family: Vincent, Marissa, Annalyse; step-siblings, Donny and Tami.

Published by New York Times on Jun. 29, 2014.
To plant trees in memory, please visit our Sympathy Store.
MEMORIAL EVENTS
To offer your sympathy during this difficult time, you can now have memorial trees planted in a National Forest in memory of your loved one.
MAKE A DONATION
MEMORIES & CONDOLENCES
13 Entries

Carlos was a remarkable scientist. He had
incredible intelligence, intuition and vision, which
made him among one of the most cited and high impact
chemists in the whole world.
All the cherished memory working together with him will keep in my
mind forever! I will always remember his smiling face, his
good sense of humor. He will be in my thoughts forever. His spirit lives in my
heart now and forever. Thank you, Carlos!
Haile Zhang
Student
June 24, 2018
Carlos we will miss you very much! You were truly a unique presence in both of our lives, thank you for being such a good friend!!
Antonella Andrioli
July 15, 2014
May your hearts soon be filled with wonderful memories of joyful times together as you celebrate a life well lived.
Matthew 5:5,7,8 R.A.
July 5, 2014
The entire Eckerd College Community deeply mourns the loss of our friend and classmate Carlos. We were in awe of you as a person and as a professional. May your family find peace at this horribly difficult time.
Eckerd College Community
July 2, 2014
Carlos was brilliant. He was also genuinely kind, deeply compassionate, and humble. What a wonderful combination. I feel so fortunate to have known him. He did great work in efforts to benefit others. He is missed by many. But through his work, many will thrive. Thank you, Carlos!
Marilyn Christopher
July 2, 2014
Usually we say in my religion, "May his memory be eternal." In Carlos' case, his memory WILL BE eternal due to the tremendous advances he made in his chosen professional career. A truly brilliant man with a heart of gold.
Steven Kanakis
July 1, 2014
Carlos, well done in this life...no telling what you'll top it with next! I am grateful to have known you, largely through your mom, but I was a huge fan wishing you well from afar!
Julia Purcell
July 1, 2014
It is apparent Carlos touched the hearts of many across the world not only through his work but with this sweet nature. My thoughts and prayers are with your family Carlos, you will be greatly missed.
Gretchen Swank
July 1, 2014
So sorry for your loss, may his memory live on in the lives of those influenced by him, be comforted by prayers in the God of hope and tender mercies, fond memories and the love and support of family and friends
Raymond
July 1, 2014
My dear friend, our hearts are broken with this news. You are truly missed Carlos
Nosha Behzadafshar
July 1, 2014
Carlos was legendary in so many ways. In addition to his many contributions advancing science were his legendary travels to all corners of the earth. I was lucky to have known him. My heart goes out to his family!
Bridget Lollo
June 30, 2014
Your brilliant mind is gone but your ingenious ideas will live on. I am very grateful to have known you as a mentor and as a friend.
Christoph Rader
June 29, 2014
Such a loss to our world; Carlos was a great guy! Brilliant, funny, sincere, generous and a blast to be with. Our thoughts and prayers go out to his entire family.
Matt Bisset
June 29, 2014
Showing 1 - 13 of 13 results