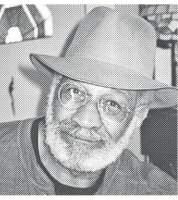 FUNERAL HOME
Brown & Sons Funeral Homes & Crematory (26th St. Chapel) - Bradenton
5624 26th Street West
Bradenton, FL
OVERTON--Clarence A. Clarence "Cleve" A. Overton, died April 29, 2020 of a cardiac arrest at his home in Bradenton, Florida, with his wife of 50 years at his side. An extraordinarily talented artist and author, he was born in Staten Island, NY and began life's adventure as a soldier in the all-black army unit, the 76th/933rd AAA in Japan, where he served from 1945 to 1948. He taught as an adjunct professor of art at Baruch College in Manhattan and the College of Staten Island, CUNY. Cleve exhibited his artwork nationally and internationally in juried shows and his works are in private collections in the USA, Europe, Africa and Asia. He lived in the DRC ('84-'86) and moved to Washington, DC in 1989. He lived in Senegal ('93-'95) and visited Mali, Niger, Ghana, Cameroon, Armenia, Switzerland, Italy, the U.K., the Netherlands, Cuba, South Africa, Sri Lanka, and Saudi Arabia. He exhibited in many galleries, including The National Museum of Dakar, Senegal, the Colonnade Gallery of GWU, Fitchburg Art Museum in MA, Savannah College of Art in GA, HNTB Architects and Parrish Gallery in Washington, DC. His media included clay sculpture and pottery, wood, steel, copper, tin, woodcuts, and mixed media. Cleve published two photographic books with his wife, Jude Andreasen: Creative Recycling: Handmade in Africa and The Doors of Senegal. He published a non-fiction memoir, In the Shadow of the Statue of Liberty, a book of essays, The New Annals of Staten Island, and a fictional satire based on his adventures in Africa, The Last Train to Kisangani. Many of his works have been donated to the Archives of the College of Staten Island. Cleve will be fondly remembered for his exceptional talents, remarkable accomplishments, and a commitment throughout his life to just causes. He was a tremendously creative, inventive, spontaneous and often unpredictable artist, a loyal, generous, forgiving friend, and a fierce proponent of social and racial justice. He is predeceased by siblings Eugene, Fred, Alice and Russell. He is survived by his wife of 50 years, Jude Andreasen, his sisters Inez and Mabel, brother David, his two daughters, Dr. Valarie Overton and Rev. Leslie Fowley, and their respective husbands Mitch and Robert, four grandchildren: Adam, Kim, Peter and Bobby and four great-grandchildren, Peter, David, Luke and Lily, and scores of other relatives and friends. Cremation at Brown & Sons Funeral Home in Bradenton will be followed by interment at Arlington National Cemetery in Spring 2021 TBD.

Published by New York Times on May 3, 2020.
To plant trees in memory, please visit the Sympathy Store.
MEMORIAL EVENTS
Inurnment
Service details to be determined.
Funeral services provided by:
Brown & Sons Funeral Homes & Crematory (26th St. Chapel) - Bradenton
MAKE A DONATION
MEMORIES & CONDOLENCES
11 Entries
Cleve was my hero. A man of such extraordinary heart, talent and energy. I am sorry we were out of touch in recent years, except enjoying his wonderous written tales. But he held, and will alway hold, a large place in my heart. My love to Jude and his amazing family.
Eberhart Fred
Friend
February 16, 2021
Dear Cleve, Your voice is still here where it will always be cherished. Your pure spirit, genuine and righteous life lived will not be forgotten and your message will be carried in each heart that you touched. Jude, I cannot know the depth of your loss. Your soulmate. Cleve’s army of one.
Love,
Missy
Missy Elles
Friend
February 16, 2021
I have known the man, not very closely. But based on my loose acquaintance with Cleve, i can say that he was a decent man. Mes sincere condolences to Jude.
Ousmane DEME
Acquaintance
August 30, 2020
Goodbye, my friend. You were one-of-a-kind! A renaissance man for sure who knew how to take life's bumps and turn them into a chance to soar. Your mind worked so fast it is almost like it was 3 minds working at warp speed together. Cleve, the world will not be the same without you; none of us would be the same without the loving impact you had on us. You will always be in my thoughts and prayers.
Susan Troccolo
Friend
May 12, 2020
We send sincere condolences to Cleve's family. My mother and I met Cleve in 1957 when he was the MC at a performance, called "Not for Bread Alone," for the benefit of CORE(Congress of Racial Equality). He had a natural gift for bringing out the best in others. He will be missed and fondly remembered for his artistic talent and exuberant ways. Among his many achievements, he was instrumental in saving a letter from W.E.B Dubois to add to the history of Sandy Grounds in Staten Island. What an honor to have known him and Jude.
Elga Antonsen-Brown
Friend
May 12, 2020
My deepest sympathy to Mrs. Overton and to the Overton family. I dont know if anyone would remember me or our family, the Barretts, but when I was little we were friends with Clarences mother and her family. My mom Sue, in particular, considered Seretta a dear friend. It is heartfelt to see that Clarence lived such a long and fruitful life. May your loving memories be a comfort to you at this time. Sincerely, Ann Nora (Barrett) Conte
Ann Nora Conte
Friend
May 5, 2020
Condolences to Jude and family . I remember Cleve from being friends with his Niece Tammy , he took us to a Knicks game at the garden in the 70s . He was a GENTLE MAN . And had many words of advice to us as teenagers . May you be RESTING in PEACE with the Lord ..
Peggy reilly
Friend
May 4, 2020
Jude and family. Our condolences on Cleve's passing. We have fond memories of getting to Cleve just a bit while you resided in Brookland DC. Peace. Chris & Ken
Kenneth Nesper
May 3, 2020
Please except my deepest sympathies to you and your family at this time of grieving
Simone Taylor
Neighbor
May 3, 2020
Offering deepest sympathy and prayers From your family Lori Tabby and Danita Staples
Tabitha Staples
Family
May 1, 2020
Going to miss you dearly Uncle Cleve. You were so kind and had a wonderful spirit. Your smile would brighten any room! I remember being a kid and always being excited when you came to visit my parents. I remember being an adult and thinking "sheesh.. i hope Im this mobile and full of life at his age." You were truly one of a kind and will be missed. Sending love and light to Aunty Jude and all of your friends and loved ones.
Mouhamadou Ba
Family
May 1, 2020
Showing 1 - 11 of 11 results