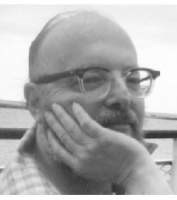 EISEN--David J., longtime NYC resident, newspaperman, chess champion and activist, passed on September 16 in Waterville, ME. Born in New York, September 2, 1925, he married Shirley Cetron in 1946 and remained married to her until her death earlier this year. They moved to Staten Island in '51, then to the Washington, DC area in '61. Dave was a reporter for the Staten Island Advance and the Elizabeth Daily Journal before being named Associate Editor, later Editor of the American Newspaper Guild newspaper, and later the Guild's Director of Research and Information. He won the U.S. Chess Federation's Postal Championship in '80 and '81. Always keenly involved in progressive causes, he wrote for many magazines, including The New Republic. Dave moved to Maine in 2005. He is survived by his son Ken of Fairfield, ME and daughter Terry Sinskie of Dedham, MA. A memorial service will be held at Noon on October 10 at the Senator Inn, Augusta, ME.

Published by New York Times on Oct. 1, 2010.
To plant trees in memory, please visit our Sympathy Store.
MEMORIAL EVENTS
To offer your sympathy during this difficult time, you can now have memorial trees planted in a National Forest in memory of your loved one.
MAKE A DONATION
MEMORIES & CONDOLENCES
1 Entry
The Best Man at my Wedding, now he is with Shirley Steve and his Mom and Dad-will try to come up for the Memorial.
Myra"Mickey"Eisen
October 1, 2010
Showing 1 - 1 of 1 results