Edward William Tayler, a professor of literature at Columbia University whose transformative lectures on Shakespeare and Milton inspired thousands of students and earned him the university's highest honors, died on April 23, 2018. He was 87.

The cause was heart failure.

Tayler was the Lionel Trilling Professor Emeritus in the Humanities at Columbia, where he taught 16th- and 17th-century poetry and prose and other canonical works for nearly four decades. A short, agile man with brown curls and piercing blue eyes, he was known for astonishing his students into literary epiphany.

Some students criticized Tayler as theatrical, but many called him life-changing. The dramatist Tony Kushner, whose plays include Angels in America, credited Tayler's Shakespeare lectures with inspiring him to become a playwright. "I thought I was going to faint, I was so overwhelmed… it made the world look different," Kushner recalled. The award-winning novelist Jhumpa Lahiri said of his class, "It was perhaps the closest I came to a religious experience."

Tayler's courses included Literature Humanities, a survey of the Western canon. The New Yorker film critic David Denby, who featured "Lit Hum" in a book, described Tayler as "brilliant;" a "hipster wit" who helped students "feel like they are reading literature for the first time."

A course that Tayler created in 1983, Logic and Rhetoric, "taught students to think while pretending to teach them to write," a student said.

In 1968, Tayler was scuffed up by police while protesting alongside students against Columbia's perceived racism and support for the Vietnam War. He was an avid Norton Commando rider and squash player who liked his martinis bone-dry, with a twist.

Tayler was born in Berlin in 1931 to William Robert Tayler, an engineer, and Violetta Klavin-Zeiden, a Latvian emigrée, and raised in Westfield, NJ. He obtained his BA from Amherst College in 1954 and his PhD in English from Stanford University in 1960, joining Columbia's faculty weeks later. He also taught at Stanford, Princeton, and the Bread Loaf School of English.

Survivors include his third wife, Christina Lee Moustakis; children (all Taylers) William Edward, David Stanley, and Letta Melville from his first marriage, to the late Stanley Craig Tayler, and Edward William and Jesse Watt from his second marriage, to Prof. Irene Smith Tayler; grandchildren Jesse, Paraskevi, and Ellison Tayler, and Kellon McGuire; and many in-laws.

Upon retiring in 1999, Tayler was Columbia's most decorated teacher. "Your students call you magical, learned and passionate, tough yet tender, witty, humane, wholly unique," read his 1996 Outstanding Teaching citation. He also received a Guggenheim Fellowship and two National Endowment for the Humanities grants. Colleagues published two collections of Renaissance essays in his honor.

Teaching "must come first and ought to be considered the noblest of endeavors," he said in 1989. "To read Homer, Virgil, and Milton with young people vitally concerned with such authors as these-now that, I thought, must be a thing worth doing."
Published by New York Times from Apr. 27 to Apr. 28, 2018.
To plant trees in memory, please visit the Sympathy Store.
MEMORIAL EVENTS
To offer your sympathy during this difficult time, you can now have memorial trees planted in a National Forest in memory of your loved one.
MAKE A DONATION
MEMORIES & CONDOLENCES
18 Entries
One of many whom Professor Tayler taught to read--the great intellectual experience of my life--I was moved to keep in touch with him over the next 43 years and found my way here to say thank-you one more time.
Mitchell Orfuss
October 15, 2018
Tyger Tyger burning bright .... may this candle be as bright, that I here light, as the mercy I pray the Lamb, Jesus,doth grant you.
August 18, 2018
CORDELIA
Unhappy that I am, I cannot heave
My heart into my mouth. I love your majesty
According to my bond, no more nor less. - Professor Tayler's seminar on Shakespeare and "Nothing" was the high point of my years at Columbia. A great teacher. A great man.
July 16, 2018
"Look to the rock whence ye were hewn, and unto the hole whence ye were digged."--Ted's inscription, in his exquisite handwriting, in my copy of Nature and Art in Renaissance Literature. His words, his wit, his wisdom touched generations of Columbia students. Heartfelt condolences to you, Chris, and to all the members of the Tayler family. Peter L. Rudnytsky, Gainesville, FL.
July 16, 2018
Spending time with Ted was both privilege and joy. I'll always keep Ted's laugh in my heart and spirit. I miss him deeply.
Stella Paul
July 14, 2018
Ted, my dear friend, goodbye again.
James Bednarz
July 12, 2018
He was everything to me
Paul Neuthaler
May 16, 2018
I will dearly miss running into Ted in the lobby or outside our building. We always shared an interesting moment or two. He was a friend. Pls let me know when you or Columbia has a memorial. I am visiting Alice in DC, but will come back. Mary Thurston. #72
May 2, 2018
We shall not see his like again. Ted was an extraordinary teacher. My Bread Loaf graduating class of 1971 asked him to give the graduation talk. My copy of his speech is a treasured document - as are my memories of his classes all these decades later.
Nancy Harley
April 30, 2018
I just now learned of his death and wish to extend to the family my most heartfelt condolences.
Alphonse Baluta
April 30, 2018
I want to share my condolences for your loss. In these hard moments may you find comfort in God for he cares about you and knows what you are going through.
Nennier A
April 30, 2018 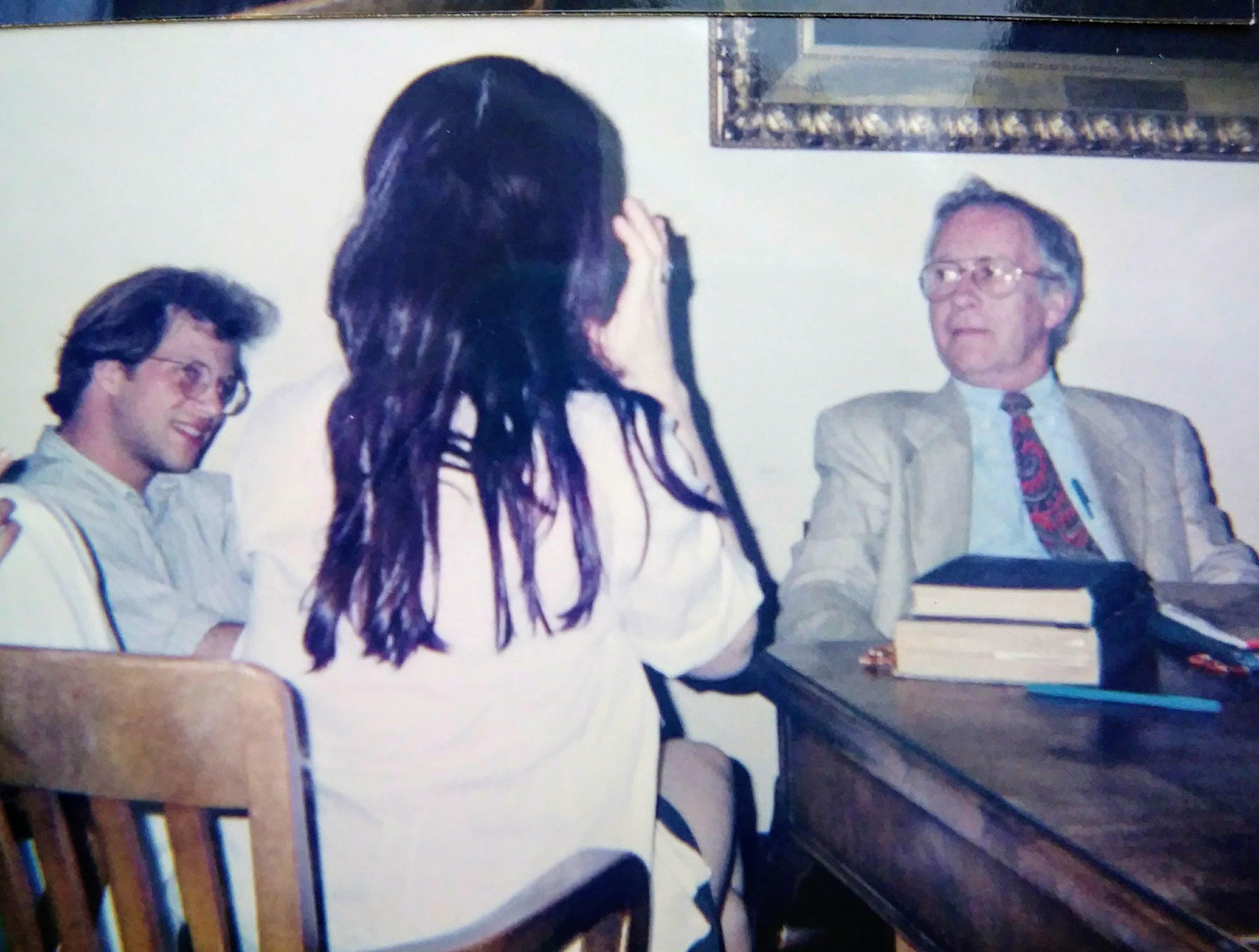 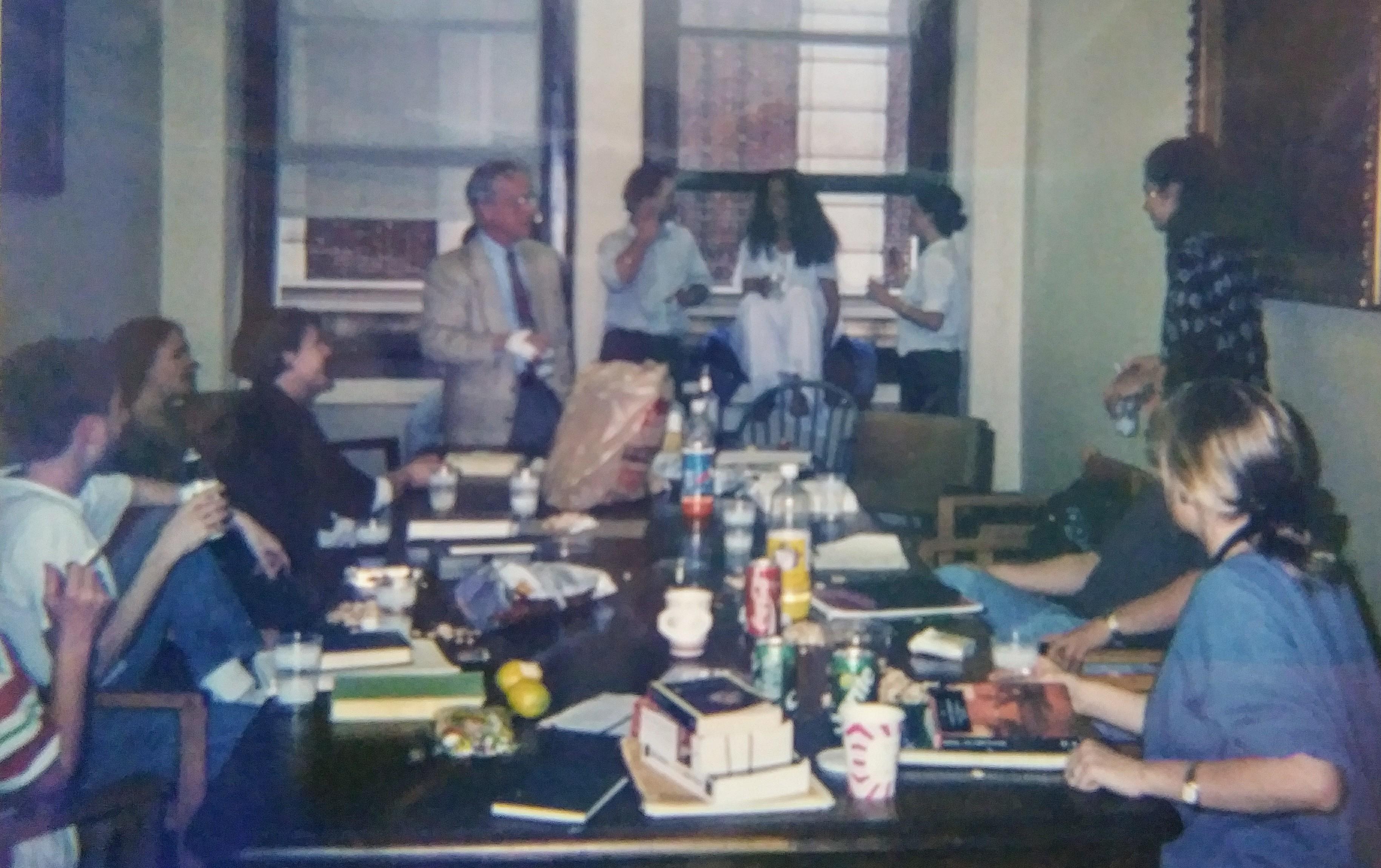 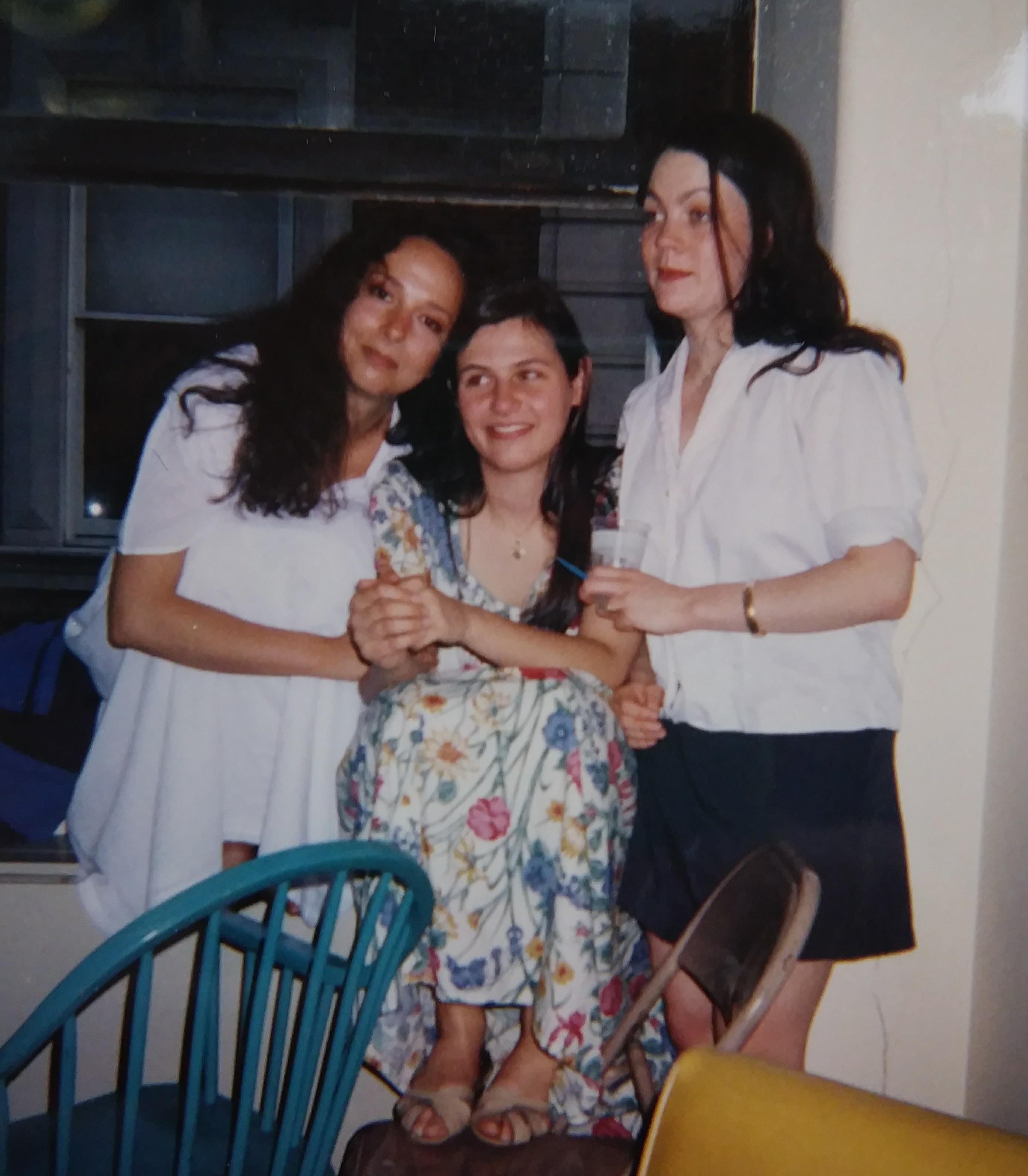 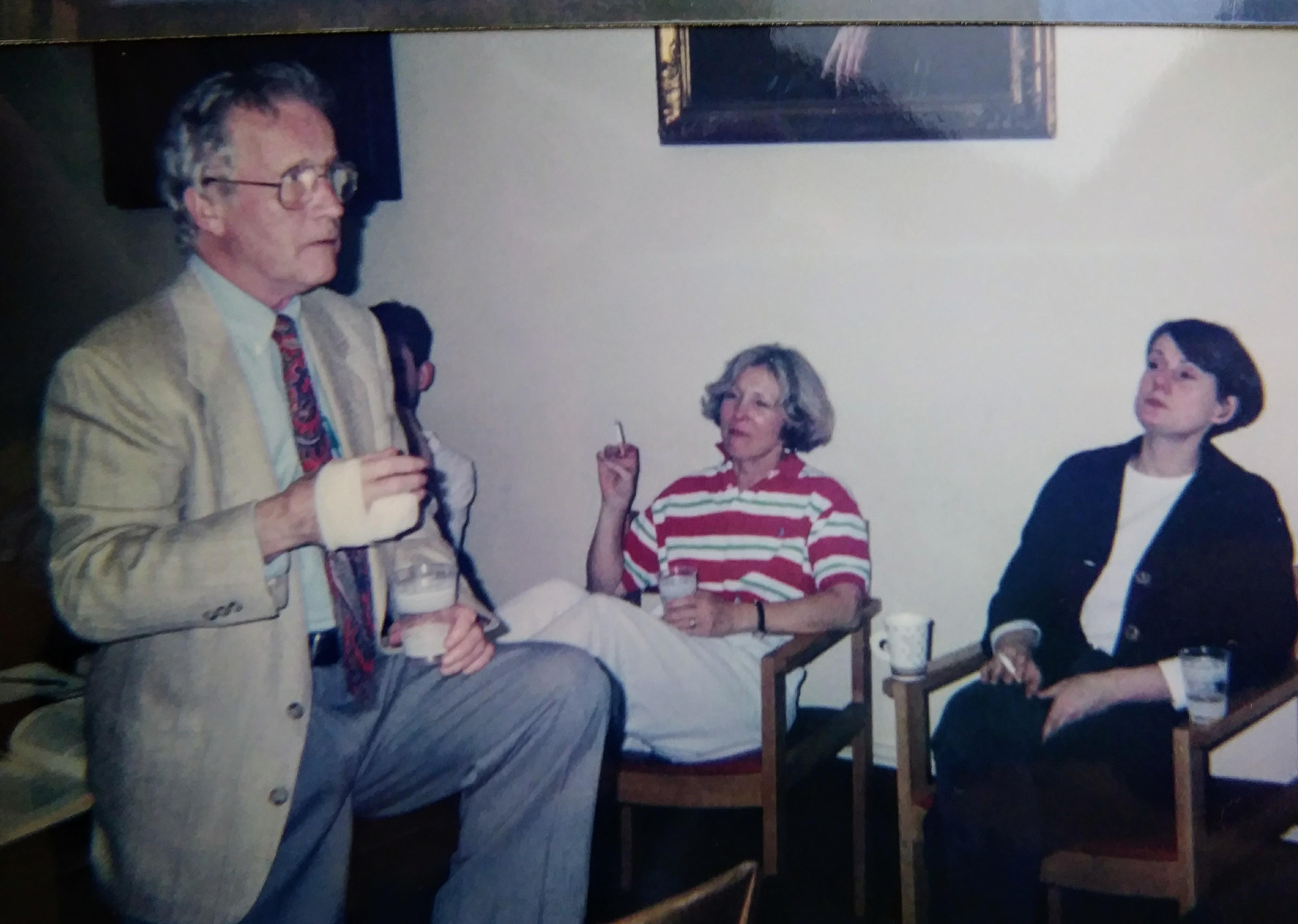 Rebecca Stanton
Student
April 27, 2018
Photos from the last session of the "16th-Century Lyric Poetry" seminar, Weds 6-8 PM, spring semester, 1994.
Rebecca Stanton
Student
April 27, 2018
Professor Tayler taught me to read. In my last Lit Hum class of the year, shortly after I learned of his death, I listed for my students the classroom catchphrases, reminders of concepts we used to unlock works from Homer to Toni Morrison, that we owed directly to him -- "the squiggle in the tail," "clumsy fake dichotomies," "Words can lie. The mode of expression never lies." Like the epic warriors on whom we first brought these ideas to bear, Tayler will live on to the last syllable of recorded time -- in the minds set alight by his teaching, and in the generations of students whose first steps in really READING literature have been and will continue to be guided by the lamps he illuminated for us, his grateful sometime undergraduates.
Rebecca Stanton
April 27, 2018
I am so sorry for the loss of your loved one Edward Tayler. May it bring you comfort in knowing that God knows your pain, and he cares for you, and will help you through this difficult time. John 6:40
Angelina
April 27, 2018
Showing 1 - 18 of 18 results