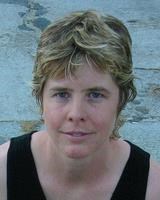 We mourn the passing of Elizabeth (Beth) R. Bird on March 28, 2021 at the age of 54. Born and raised in Philadelphia, Beth lived for 10 years in New York City after college and then for 20 years in Los Angeles and San Francisco. Beth lit up the room with her enthusiasm for life and intense energy. She will be remembered for her fierce independence, love of life and deep commitment to friends and family. A graduate of Germantown Friends School, Philadelphia (1985), Brown University, Providence (BA 1990) and the California Institute for the Arts, Los Angeles (MFA 2003) she also studied in UC Irvine's Department of Art (1999-2000) and was pursuing a PhD in UC Berkeley's Department of Film & Media (2016-2020).

Beth was a scholar, educator, filmmaker, and activist, whose life path and achievements were deeply informed by Quaker values and Buddhist practices. She was a life-long member of the Religious Society of Friends (Quakers) and a practitioner and instructor of Sivananda Yoga. An inspiring teacher, for more than twenty years she taught courses on film, media and art history at UC Berkeley, UC San Diego, California College of the Arts and San Francisco Art Institute, among others. She was passionate about the intersection of media and social issues, especially immigration rights. Having spent a summer in Mexico during high school, and, later, a year in Colombia and Peru in college, she developed a special connection to the struggles of disenfranchised peoples throughout Latin America. As a filmmaker, she is best known for her feature-length documentary, "Everyone Their Grain of Sand," (2004), which examines the impact of globalization on land ownership in northern Mexico, with a focus on Tijuana's Maclovio Rojas community. The film won several awards including the Target Jury Award for Best Documentary at the Los Angeles Film Festival. An early proponent of marriage equality, Beth toured the country during the mid-1990s, with her advocacy video "Love Knows No Borders," (1995), which features transnational LGBTQ+ couples discussing the discrimination of US marriage laws. Beth also worked as a producer for documentary film and television and served on the Board of Directors of the International Documentary Association (2007-2015). Some of Beth's happiest moments were spent in Vermont, either at the family summer house or the nearby Farm & Wilderness Summer Camp. She had a deep connection with the natural world and was an avid hiker, birder and cross-country skier. Beth was deeply devoted to her son Mateus. She will be remembered for her strength and determination, her integrity and dedication to honesty, both in herself and others. She will be deeply missed.

Donations "In Memory of Beth Bird" can be made to Farm & Wilderness, 401 Farm and Wilderness Road, Plymouth, VT 05056 (https://farmandwilderness.org/givin
g/).
Published by New York Times from Apr. 8 to Apr. 9, 2021.
To plant trees in memory, please visit the Sympathy Store.
MEMORIAL EVENTS
To offer your sympathy during this difficult time, you can now have memorial trees planted in a National Forest in memory of your loved one.
MAKE A DONATION
MEMORIES & CONDOLENCES
Sponsored by Betti-Sue Hertz.
7 Entries
Betti-Sue, I was so sad to hear the news of Beth’s passing. What an extraordinary, inspiring woman, it was an honor to have met her through you. Sending you all of my strength & love. Debbie Mayer
Debbie Mayer
Acquaintance
June 3, 2021
We knew Beth as a young girl. She was so full of life. We are heart broken to hear about her death. She was so amazing at her mother's funeral. We loved seeing her with Mateus. She was brave and courageous and loved life. What a tragedy. May her memory be a blessing.
Tina and Barbara
Friend
April 24, 2021
I remembered so much about my best high school (and grade school) friend this week, like her calling me up to read me the first page of Robert Penn Warren's All The King's Men when it was assigned to us in 12th grade. She was floored by its beauty and the only thing to do was share it. I was lucky to be on the receiving end of that. Her showing up late, with an extra-large fountain soda, at what I at least found to be a very intimating seminar at Brown ("Freud and Lacan" maybe?). In shorts and without a pencil or notebook, she would make the most straightforward and disarmingly brilliant remarks. She saw me through some really rough times in middle school. Nothing about coming of age for me would have been the same without her. I am sure being close to her later in life offered even more blessings, and I am sorry for your loss.
Jane Brodie
Friend
April 11, 2021
Beth may have been the most intensely alive person I have ever met. We are so lucky to have gotten to know her in San Francisco.

We are sending love to Mateus and Betti-Su.
Julie minoff
Friend
April 11, 2021
Beth was in my Spanish class in 7th grade at Germantown Friends School. She was such an extraordinary student, already in middle school. Energetic, gifted, engaged -- complex and full of exciting perspectives. I stayed in touch with her on and off across the years and got to meet her son a few years ago at a memorial for her mother at the Germantown Meeting to which I belong. I offer my condolences to all of Beth's family and grieve with you for this way too young loss of an extrarodinary woman.
Marion Heacock
Teacher
April 11, 2021
Beth was a lovely young presence in our lives when we lived in Germantown. With our very long relationship with Barbara, we followed Beth's life as well as we could -- third hand. The very sweet and precious moments we shared with her in the last months of her life will remain a deep reminder of her spirit, her zest for life, and her deep connection to the family that raised her in the "village" of Germantown Meeting, and that foundation that nurtured her. Her legacy of a deeply loving family and friends, and a body of important professional work are a testament to a remarkable life. With so much affection, Paula and Howard Cell
Paula and Howard Cell
Friend
April 11, 2021
I am so sad to hear that Beth is no longer with us. I knew her at Germantown Friends and then at Brown University. I was always in awe of her brilliance and her freedom. One indelible memory: a big class on Marxism, in a room with stadium seating, Beth would sometimes listen to the lectures and engage in vigorous debate with the professor (Neil Lazarus) and students from her position, reclining on the floor, her head propped on her hand. Someone—even from distance of many years—I feel happy and privileged to have known.
Steven Miller
Classmate
April 11, 2021
Showing 1 - 7 of 7 results