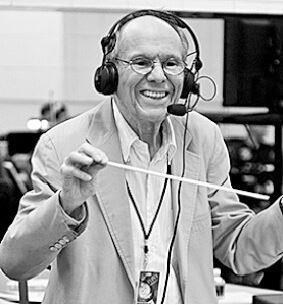 LAWRENCE--Elliot. Music director, conductor, composer, music producer, passed away peacefully July 2, 2021 at New York Presbyterian Hospital. Over the course of his long and multifaceted career in the music business he worked with legions of singers of note and every prominent arranger and orchestrator. As the music director of the Tony Awards, he music directed every show from its first 1967 television broadcast until 2013 -- an astounding 46-year run in a fickle business. Elliot was himself a recipient of a Tony for music direction for How to Succeed in Business Without Really Trying (1962), as well as ten Emmy Awards. Elliot Lawrence was born Elliot Lawrence Broza on February 14, 1925 in Philadelphia, PA. His parents, Stan Lee Broza and Esther Broza, were radio and television pioneers, creating and producing the Horn and Hardart Children's Hour, which ran on WCAU radio from 1927 to 1958 and on television from 1948 to 1958. Elliot took the name Elliot Lawrence when he became the music director of WCAU's house band in 1945. The band's weekly show, "Listen to Lawrence," vaulted to a national broadcast on CBS radio later in 1945. From 1946 to 1954 the Elliot Lawrence Orchestra toured the U.S., and recorded albums for Decca, Columbia, RCA, and Fantasy. Lawrence's recording of his and Gerry Mulligan's composition "Elevation" was named "one of the top 50 jazz recordings of the 20th Century" by the Smithsonian Institution:
https://www.wikiwand.com/en/Smithsonian_Institution

In 1953 Elliot went to the Soviet Union with The Ed Sullivan Show as part of the first American band to broadcast from the Soviet Union. In addition to How to Succeed in Business, Elliot music directed many other original Broadway shows including Bye Bye Birdie, (1960) for which he was nominated for a Tony award. Other shows were GoldenBoy, Here's Love, The Apple Tree, Golden Rainbow, La Strada, Sugar, and Georgy. His film career includes composing and conducting the score for the Oscar-winning film Network and the opening sequence of The French Connection. Elliot won ten Emmy awards for musical direction and was nominated for many others. He conducted television specials for Placido Domingo, Anita Baker, Ann Margret, Anne Bancroft, Joel Grey, Patti LaBelle, Burt Bacharach, and Dionne Warwick. From 1978 to 2002 he executive produced all the music for the advertising agency N.W. Ayer, including the Army's iconic "Be All You Can Be" jingle and AT&T's "Reach Out and Touch Someone." At one point in the 80's he was producing all the music for the daytime dramas Search for Tomorrow, The Edge of Night, As the World Turns and The Guiding Light. In 1956, Elliot met Amy Bunim on a blind date in New York City. They married three months later, and were together until Amy's passing in 2017. They had four children, Alexandra, Danny, Jamie and Mia. Over the decades Amy and Elliot built a world-class African and Oceanic art collection. He is survived by his children, daughter-in-law Margot Herrera, and five grandchildren, Oliver, Jack, Jacob, Carmen, and Rumi.

Published by New York Times on Jul. 16, 2021.
To plant trees in memory, please visit the Sympathy Store.
MEMORIAL EVENTS
To offer your sympathy during this difficult time, you can now have memorial trees planted in a National Forest in memory of your loved one.
MAKE A DONATION
MEMORIES & CONDOLENCES
1 Entry
Let the muffled drum roll , but end with a gentle tap, for one who has been among us for far too short a time
john donald crocken
Work
July 20, 2021
Showing 1 - 1 of 1 results