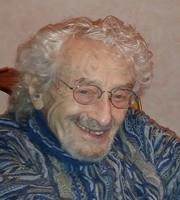 Zeke Berlin passed away on April 28th after being blessed to have LIVED life to the fullest for nearly all of his 97 years. After serving in WWII, Zeke earned a B.A. from Temple University went on to Yale University School of Drama for his MFA and earned his Doctorate in Theater at NYU. He acted some, but rapidly advanced to directing. While directing summer stock productions around the country, Zeke directed some of the biggest names in theater.

Despite mastering the art of directing and educating others in the ways of theater, Zeke never lost his thirst for knowledge. He spent a year at Osaka University in Japan researching an all-female acting company. That year endowed him with an enduring respect for Japanese people, culture and cuisine. In fact, while chairing the theater department at Rutgers University/Camden, Zeke went on to stage one of the most memorable performances of the Japanese timeless, classic morality play Rashomon.

Zeke and his beloved wife of 71 years, Sara, complemented their careers in theater and teaching with a zest for travel. While in their eighties, Zeke and Sara traversed the globe – often on walking tours – that took them around Europe, through Mongolia, even to the edge of Antarctica! Most notably, during this penultimate decade of his life, Zeke zip-lined over the Amazon rain forest!

Theatrical, adventurous, Zeke was also devoted to Judaism. For more than twenty years, he lent his directorial and acting skills to the Temple Sinai Players, putting on engaging and message driven skits specially written to bring contemporary flavor to High Holiday readings. Not surprisingly, Zeke often was cast in the role of G-d. As one of his closest cohorts said, "The G-d Zeke portrayed is the G-d whose image I hope I'm made in."

Zeke is survived by his wife Sara (Krasnow) Berlin and extended loving family.
Published by New York Times from Apr. 29 to Apr. 30, 2020.
To plant trees in memory, please visit the Sympathy Store.
MEMORIAL EVENTS
To offer your sympathy during this difficult time, you can now have memorial trees planted in a National Forest in memory of your loved one.
MAKE A DONATION
MEMORIES & CONDOLENCES
10 Entries
Dear Unc sorry I lost touch with you and aunt Sara. You were a significant figure in my childhood and a composite of the most pleasant memories of my life. I hope Sara is weathering your passing well.
David M. Pollack
Family
August 11, 2020
My condolences to Sara and family. Zeke was my mentor and fabulous acting professor. I was in every show that he directed during my years at Rutgers Camden. He cast me in The Seagull as a freshman and it meant the world to me. He taught me old school classical acting style as well as The Method and even Japanese style. We were together in the rehearsal hall and the theater day and night. He taught me theater discipline. I saw him and corresponded with him after I graduated. He came to see my return to Rutgers Theater when I did A Midsummer Night's Dream and we went to dinner. I was so honored to be taught by him because he had worked with greats such as Gloria Swanson and was Paul Newman's roommate for a while at Yale Drama School. I'm so glad that I attended Rutgers Camden while Zeke was there. Zeke, may you enjoy that huge stage in heaven - I hope to be directed by you when I get there.
John Kendall
Student
May 2, 2020
Zeke hired me as an adjunct lecturer at Rutgers in 1989. I remember him as welcoming, affable and sparkling with knowledge. Reading his obituary made me smile--he was a man of curiosity, adventure and love. What a life and legacy. Many blessings to the family.
Nancy Ellis
Coworker
May 1, 2020
I studied with Zeke for about a year and a half at Rutgers University. I was young at the time and I didnt understand the respect for the craft of acting Zeke taught me that he will be missed
Norman Taylor
Student
May 1, 2020
Please except my deepest sympathies to you and your family at this time of grieving
Simone Taylor
Neighbor
April 30, 2020
Zeke was a true gentleman! May he rest in eternal peace.
April 30, 2020
I feel so honored to have known Zeke for the short time that I did. My husband Elliott and I have talked many times about how Zeke and Sarah have inspired our happy marriage, love for travel and commitment to education.
Jonna Karetny
April 30, 2020
Zeke was an incredible teacher and an inspiring mentor. Some of my most memorable moments were performing under his direction at Rutgers Theatre. I owe my love and dedication to theatre and the performing arts and my career in Arts Administration to Zeke. May he Rest In Peace with the theatre angels.
Marci Hawawini
Student
April 30, 2020
Missing Zeke already, his super active mind, clear to the end, his whimsical funny side, his readiness to share his knowledge and friendship to others, all that and more have led to admiration of my brother -in-law of 70 years, and memories I will always cherish. To my sister Sara, his other half, heart warming memories will be there for you.
Miriam Nadler
April 29, 2020
We were honored to have been with Zeke for 70+ years as his sister and brother in law. He will be deeply missed.
Elaine (Krasnow)and Jules Ellison
April 29, 2020
Showing 1 - 10 of 10 results