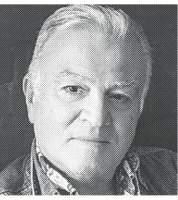 FUNERAL HOME
Thomas M. Gallagher Funeral Home
104 Myrtle Ave
Stamford, CT
ACCORNERO--Francesco M. "Franco." Known almost as much for his charming physicality and generous spirit as his brilliant art, Francesco Maria Accornero, the nationally-known Romance cover illustrator called Franco, died at home in Stamford, CT on April 14, 2020 of prostate cancer. Born the oldest son of Luigi Eduardo Accornero and his wife, Emilia Fata in Cava de' Tirreni, Italy on December 4, 1938, Franco spent most of his youth in the neighboring town of Naples. In high school and college he excelled in running, swimming, rowing, boxing and fencing events. As tradition demanded of first sons to follow in their fathers' footsteps, he graduated with a degree in Electrical Engineering from Instituto di Alessandro Volta Napoli. For nine long years he worked for the Ministry of Transportation in Rome before coming to the United States, seeking a career in art, his early and true passion. He studied portraiture and landscape painting at the Art Students League in Manhattan and took courses focusing on composition and understanding color at The Visual Art Institute. His illustration career, from which he never retired, lasted nearly 50 years. Franco worked with all the major publishing houses in the U.S. and Canada such as Harlequin, Kensington Publishing, Bantam, Dell and New American Library producing thousands of Romance covers. He was at one time the highest paid illustrator in his field. Second rights to his art sold not only in the States but throughout Europe and Japan. Stephen King, Dean Koontz, Pat Conroy and Jeffrey Archer were among the many authors whose books bore his artwork. His illustrations helped boost the careers of some of his favorite models including Fabio and John DiSalvo. Lou Malcangi, of Kensington Publishing, remembered Franco saying," As an art director, I always knew that an assignment sent to Franco would result in the quick turnaround of an illustration of the highest quality. The man did not disappoint! I've worked with Franco since the early 90's and was amazed at the level of quality in his illustrations. At that time he had already moved his workflow to digital, a very daring move for someone as accomplished as he was with traditional oil painting. Franco was always pushing the boundaries and looking forward, fascinated by what technology could offer the professional artist. He was a trained artist and engineer, an amazing combination of creative genius and logical problem-solver. He truly was what we call a "Renaissance Man" The most important thing I learned from Franco is that "art is art" no matter the medium. The artist uses what is in front of him to create beauty, whether it be oils, charcoal, water colors or digital tools." Mr. Accornero leaves to mourn him his beloved wife, Deirdre Rainey, and their adored son, Alessandro, his brother, Claudio (Lidia) Accornero and sister-in-law, Elena Del Bon of Rome, sister-in-law, Orelia Dunnigan and mother-in-law, Doris Rainey of Durham, NC, a host of nieces and nephews and Karen Cowdrey of California. He was predeceased by a younger brother, Roberto.

To plant trees in memory, please visit our Sympathy Store.
Published by New York Times on Apr. 19, 2020.
MEMORIAL EVENTS
No memorial events are currently scheduled.
To offer your sympathy during this difficult time, you can now have memorial trees planted in a National Forest in memory of your loved one.
Funeral services provided by:
Thomas M. Gallagher Funeral Home
MEMORIES & CONDOLENCES
3 Entries
A truly creative artistic genius...A truly loyal friend...And most importantly, a loving caring human being to anyone who requested your comfort and support...we will miss you.
Dennis McCormick
April 26, 2020
Rest In Peaceyou were a lovely ma.
Judy McCormick
April 26, 2020
May God's promise found in John 6:40, of the hope to see our loved ones again, comfort your heart and give you peace, strength, and hope in the days ahead.
April 21, 2020
Showing 1 - 3 of 3 results