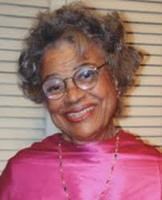 1914 - 2018
Ms. Gertrude Jeannette, Mother Gertrude as she was addressed in the community, was a member of the 1940's American Negro Theatre (ANT) in Harlem, co-founded by Abram Hill and Frederick O'Neal. Other members in ANT included Sidney Poitier, Harry Belafonte, Ruby Dee, Ossie Davis, Clarice Taylor, Earl Hyman, Rosetta Lenoire, Roger Furman and others. The training and experience she received as a member of ANT gave her the motivation and commitment to open theaters in Harlem in the 1950's. In 1979 she founded The H.A.D.L.E.Y. PLAYERS (Harlem Artists' De¬vel¬op¬ment League Es¬pe¬cially for You) in answer to the need for emerging and professional artists, playwrights and directors of color to develop their skills in the theatre, and to enrich the cultural life in the Harlem community.

Ms. Jeannette, a veteran actress in Radio, Stage, Film and TV garnered a string of Historical, firsts: In 1935, Ms. Jeannette became the first woman licensed to drive a motorcycle in New York City; In 1942, because of the shortage of male taxi drivers, caused by the war she became the first woman to get her license to drive a Taxi Cab in New York City; And in1950, CBS' General Electric Hour produced James Weldon Johnson's Gods Trombones. Ms. Jeannette replaced Pearl Bailey who was originally cast in that role and as a result, she along with Fred O'Neil, became the first Black actors to appear on National Television - Three Historical Firsts.

Among Ms. Jeannette's honors and awards are: 1984 Outstanding Pioneer Award for AULDECO; the AT&T and Black America Recognition Award for the National Council of Negro Women, Manhattan Section; the National Black Theatre Festival in Winston-Salem, NC in August 1991 for the "Living Legend Award"; inducted into the Hatch - Billops Oral History Collection at the Schomburg Center for Research in Black Culture; the 1998 Lionel Hampton Legacy Award; the Stand on Our Shoulders Award from Delta Sigma Theta, Bronx Chapter; was inducted into the Bushfire Theatre Walk of Fame in Philadelphia, PA; was inducted into the Arkansas Black Hall of Fame on October 16, 1999. On Oct. 4th, 2002, she received the prestigious "Paul Robeson Award" from the Actors' Equity Association. She received three AUDELCO Nomination for the 2010 Best Play Revival for her play "Gladys' Dilemma".

Ms. Jeannette continued to actively work as an Actress into her 80's and retired from directing at the age of 98. In 2012, Ms. Jeannette and Ruby Dee selected Voza Rivers to provide leadership and direction to Gertrude Jeannette's The H.A.D.L.E.Y. PLAYER.

She is survived by a legacy of cousins, nieces, nephews, and an extended family of friends.
Published by New York Times from Apr. 14 to Apr. 15, 2018.
To plant trees in memory, please visit our Sympathy Store.
MEMORIAL EVENTS
To offer your sympathy during this difficult time, you can now have memorial trees planted in a National Forest in memory of your loved one.
MAKE A DONATION
MEMORIES & CONDOLENCES
5 Entries
Gertrude you surely are missed and had a life blessed for many years. I came across you obituary and connected with your life story I to use to drive a motorcycle and taxi in the 90's so i can only imagine what it was like in the 40's and 50's. Your life and connections will be eternally remembered and honored. My condolences to your family friends and loved ones. Rip
Kathleen Condrick
April 29, 2019
I'm so sorry for this lost, I spoke with her and her care taker a few months back. I told her who I was then asked if she remembered me she said of course I do. We talked about family and us coming to New York to visit and how much I missed cooking and her peach cobbler. For those who don't know, I'm Gertrude Jeanette's sister Alberta Lambert's oldest great granddaughter. I called the number I've been calling for some years now and it is now disconnected. I was calling to let her Know we had just lost Joyce Ann Davis AKA Bonnie Jean Davis. So, I looked her up and found that our aunt Gertrude had just passed as well. I love her and will miss her dearly, this lost hurts. Much love from her sister side of the family.
Jamezetta Bailey
April 21, 2018
So sorry for your loss, but comfort can be found in God's Word at Psalm 147:3: He heals the brokenhearted; He binds up their wounds.
CD
April 18, 2018
I am so sorry for the loss of your loved one Gertrude Jeannette. May it bring you comfort in knowing that God knows your pain, and that he cares for you, and will help you through this difficult time. John 6:40
Angelina
April 14, 2018
May she be remembered for the good and kindness he showed towards all those whose hearts were touched by his generous and giving spirit. God keep those who pass on in his memory because they are precious to him. Psalms 116:15.
AC
April 14, 2018
Showing 1 - 5 of 5 results